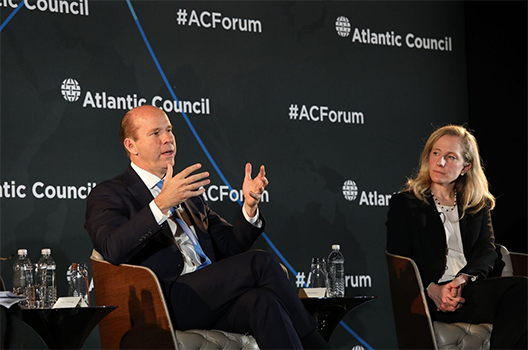 Two US lawmakers—one serving and another incoming—listed their top national security concerns at the Atlantic Council’s Annual Forum in Washington on December 14.

US Rep. John Delaney, a Maryland Democratic and 2020 presidential candidate, said he worries about nuclear proliferation, especially in the context of a future leadership transition in Russia and efforts by nonstate and state actors to obtain nuclear weapons; China’s ability to repel the United States militarily from the Asia-Pacific region; and cyber security.

US Rep.-elect Abigail Spanberger (D-VA), a former CIA operative, said the US Congress first needs to put an updated Authorization for Use of Military Force (AUMF) in place. Second, she said, Congress must take action to ensure that the United States is “doing the right thing” in terms of trade policy and specifically when it comes to tariffs, on which she said the United States is “antagonizing our friends and allies throughout the world with our aggressive tactics.”

The Trump administration’s aggressive trade tactics are “hurting people in districts like mine across the country, it is also hurting our position in the world and our relationships with so many other countries,” Spanberger said.

And third, she said, she has “significant concerns about how we are engaging with countries throughout the world, with the position of American leadership in the world, how we as a country present ourselves, and what it is that we are conveying about our priorities.”

“I think that we have had some missteps in the past two years and I think that we need to do a good job of making sure that we are, in the pursuit of our domestic policy and our international policy, recognizing that we have historically played a very strong role as a stabilizing force and a positive example in our world and that we should always have that as our goal,” she added.

In a glimmer of bipartisanship, Delaney said that on China “I don’t agree with the president’s tactics, but I think his instincts are correct. We do have a big issue with China.”

He said “there is tremendous bipartisan support on the notion that we have economic, national security, military issues with China.”

As things heat up between the United States and China over technology issues, Delaney said it is important for China to play by the rules.

Delaney and Spanberger participated in a conversation hosted by Atlantic Council board director Paula J. Dobriansky.

Delaney and Spanberger had some tough advice for the US Congress.

Spanberger said Congress has, over the past two decades, been fearful of having tough conversations on issues such as trade policy, the role of tariffs, and military engagement. “But it is the role of Congress to have those hard conversations, to have that vigorous debate, and to communicate well to the American people why they advocate for this or that,” she said.

“In our political spectrum, it has been easier and easier for many politicians to retreat from that because you’re going to avoid a hard conversation that might come back to haunt you later,” she said. However, she added, it is an obligation for members of Congress to have earnest conversations.

Delaney, who has served in Congress since 2012, said he has “watched for the last several years where Congress has not exercised its authority as a coequal branch and has been woefully inadequate in the exercise of that very significant responsibility.”

‘A great day for Congress’

On December 11, the US Senate voted to withdraw US military aid for Saudi Arabia’s war in Yemen and to blame Saudi Crown Prince Mohammed bin Salman for the murder of Washington Post columnist Jamal Khashoggi.

Spanberger said she hoped the vote was an example of senators showing a willingness to “stand up for values that are foundational to who we are as a people, but also to stand up and have a hard conversation on the floor of the Senate and put down a marker for what they believe to be acceptable.”

Delaney described the Senate vote as “a great day in the Congress.”

“They basically voted to end a war they did not authorize,” he said.

“Yesterday, the Congress stood up and said ‘Listen, the murder of Jamal Khashoggi was atrocious and we are not going to send a signal to the rest of the world that they can get away with this and we are going to do something,’” he added. Khashoggi was killed when he visited the Saudi Consulate in Istanbul in October.

“The Democratic Party has changed a little bit,” said Delaney. “The party is in a bit of a different spot now because we have a president who, in our judgment, is an isolationist and a nationalist. He wants to build a wall, tears up Paris climate [accord], questioned NATO, suggested that other countries should get nuclear weapons.”

“It has changed the Democratic Party a little bit in our head set,” he said, noting that in his opinion this cost Democrats in the midterm elections this past November. “We realize that the Democratic Party and the values we stand for should be engaging globally in building this world order and trade is central to that. You should not be having a national security or diplomatic discussion with a foreign country without having your economic team at the table as well,” he added.

“While remaining committed to offering a platform for the exchange of ideas on many of the world’s most pressing issues, we’ve made a deliberate effort this year to engage with an even wider group of senior decisionmakers and policy thought leaders,” he said.

Jones also highlighted a new body of work that the Atlantic Council has initiated on the future of US leadership and the rules-based international order. This multiyear initiative is “aimed at analyzing the intersecting risks that lie at the heart of our mission, and developing an actionable strategy to revitalize, adapt, and defend the rules-based order.”

The initiative will produce “a US Global Strategy for revitalizing, adapting and defending a rules-based international order; and preparing a Declaration of Principles to identify and articulate the fundamental tenets of a rules-based order to reaffirm public support in US global leadership,” he added.