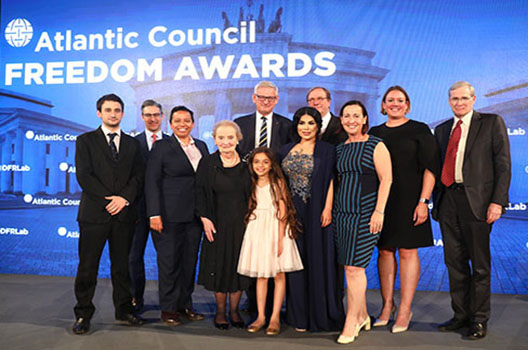 Former US Secretary of State Madeleine Albright, in accepting the Atlantic Council’s 2018 Freedom Award, urged Americans and Europeans alike not to allow “peddlers of hate,” on both sides of the Atlantic, “to hijack the institutions that ensure our freedom and define our democracies.”

In her June 23 speech in Berlin, Albright castigated “leaders who want us to believe that greatness is defined by spectacle—not character—that honor is irrelevant, and that winning means not having to answer any questions.”

Albright, eighty-one, was born in Prague, emigrated with her family to the United States in 1948 and rose to prominence as the first female secretary of state in US history, serving former President Clinton in that capacity from 1997 to 2001.

“As a little girl in Czechoslovakia, I saw what happens when good and decent people fail to unite in the face of threats to freedom. And it disturbs me greatly to hear echoes and see shadows of that era in our day. Now, as then, there are politicians who propagate conspiracy theories designed to nurture hate and fear among average citizens, who encourage followers to lash out at people who differ from themselves, and who promise simple solutions to hard problems through the repression and degradation of others,” she warned.

“Now, as then, there are leaders who seek to monopolize authority by rewriting constitutions, co-opting the courts, weakening legislatures, and equating dissent with treason,” added Albright. “We are gathered this evening in a city that was once decimated and divided, but now reborn into a capital at the heart of a new Europe. This history is a reminder that we cannot afford to be complacent. We have to draw a line between legitimate debate and efforts to augment power by chipping away at the foundations of democracy.”

Albright, whose latest book is titled “Fascism: A Warning,” vowed to uphold the transatlantic relationship in the face of growing xenophobia and a brewing trade war between Washington and its European allies.

“We will not abandon all that have gained from decades of shared sacrifice. We will not accept the idea that we should simply go home and sleep, ignoring the gathering threats to peace,” she said. “We will not remain silent as they strive to drain the meaning from words and to convince us that up is down and wrong is right and truth is whatever they claim it to be.”

“Now is not the time to build walls. We did just that half a century ago, the consequences of which still reverberate today,” said Teltschik. “No, now is the time to tear down our walls and overcome the difficulties, which is why I am delighted to be part of tonight’s celebration.”

Former Swedish Prime Minister Carl Bildt noted the symbolism of Albright, “a girl from and of Europe,” receiving the 2018 Freedom Award in “this city of Berlin, where Nazis were defeated, where communism collapsed, and where Europe started to come together again, and where US leadership over the decades has been so profoundly important.”

Following Albright—the oldest of the evening’s honorees—on the stage was the youngest: nine-year-old Syrian war refugee Bana Alabed, who used Twitter to raise awareness about the Syrian War and the siege of Aleppo.

“I want to thank the Atlantic Council for giving me this award. I’m so happy for standing up in front of you all,” said Bana, whose Twitter account— “Dear World”—is managed by her mother, Fatemah Alabed, and which at last count had 349,000 followers.

“Just sixteen months ago, me and my family were living in Aleppo under siege and bombing I was afraid to die. But my biggest fear [was] that one of my brothers will die,” she said. “I am happy we are all alive today.  One day without bombing in Syria would make me the happiest person in the world because I hate war.  It destroyed all I had. It killed my friends.”

“I asked my mom to help me share our story on Twitter so the world can know what is happening there,” the girl added. “Children in Syria are tired of war. I must say to all the leaders around the world they are not helping enough to stop the war. Many children are dying.”

During the awards dinner, former National Security Advisor Stephen Hadley announced the imminent launch of a new rules-based international initiative between the Atlantic Council and Canada’s Centre for International Governance.

“Those of us who are committed to an international system that favors freedom and the rule of law must join together and take action to adapt, revitalize and defend that system,” Hadley said. “Our effort already includes representatives from both the developed and the developing worlds, including countries like India, Indonesia and Brazil.”

Hadley added: “The success of such an effort may determine whether the international system descends into chaos and less benevolent actors fill the void, or emerges, revised and revitalized, to build a more stable and prosperous world for everyone.”

The third awardee of the night was the International Women’s Media Foundation (IWMF), which supports female journalists around the world with training and fellowships, and raises awareness of the dangers they face when reporting the news. Katie Harbath, Facebook’s global politics and outreach director, presented the award to IWMF’s executive director, Elisa Lees Muñoz.

As Muñoz explained, “it is not easy being a woman in the news media today.  And the more you know about the peril they face to simply do their job, the more one must admire and honor them.” Muñoz challenged the audience to “change the status quo. . . if each of you simply asks whether you’re received balanced information by noticing the gender of your newsfeed and choosing to click on articles written by women, commenting to media outlets when you see a lack of diversity, and standing up for those you see being harassed online and in person, you will be part of the solution.”

Lydia Polgreen, editor-in-chief of HuffPost, presented the final award of the evening to Aryana Sayeed, an Afghan artist who defied a Taliban fatwa and performed for more than 3,000 people in Kabul last August.

Despite being the target of death threats and protests, Sayeed said that she has hope for Afghanistan. “The fact that I, as an Afghan female artist and a human and women’s rights activist, can step in the middle of a football field in Kabul and perform. . . where not so long-ago women were viciously executed. . . is a clear indication that progress is being made.” Sayeed dedicated her award to two recent victims of gender violence in Afghanistan and ended the evening with a brief performance of a Farsi song celebrating the power of women.

Tel-Aviv based journalist Larry Luxner is news editor of The Washington Diplomat. Follow him on Twitter @LLuxner.

Image: Atlantic Council Freedom Award honorees and presenters pose for a group picture after the ceremony.