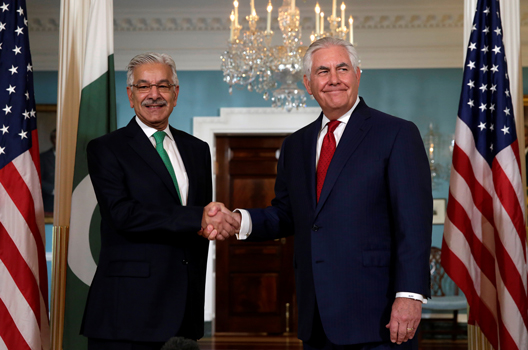 US Secretary of State Rex Tillerson (R) shakes hands with Pakistan's Foreign Minister Khawaja Muhammad Asif before their meeting at the State Department in Washington, US, October 4, 2017. (REUTERS/Yuri Gripas)

US Secretary of State Rex Tillerson was right when he recently told an audience at the Atlantic Council that Pakistan’s leadership must eliminate terrorist safe havens, warning that a failure to do so could cause them to “lose control of their own country.”

Tillerson said that the US-Pakistan relationship has “really deteriorated” over the past decade and that “now we’re engaged with Pakistan in a conversation to ensure our expectations of them are clear, that our concern is really about Pakistan’s stability.”

“Pakistan has allowed so many terrorist organizations to find safe haven within its territories, and these organizations are growing in size and influence, that at some point, I have said to the leadership of Pakistan, you may be the target, and they turn their attention from Kabul and decide they like Islamabad as a target better,” the secretary of state said at the Atlantic Council on December 12.

“We cannot continue with the status quo, where terrorist organizations are allowed to find safe haven inside of Pakistan,” he added.

Pakistan’s security establishment views home-grown terrorist groups as a way to create strategic depth in its neighborhood—particularly in India and Afghanistan. As a result, a broad spectrum of terrorist groups has found sanctuary in Pakistan. Among them, al Qaeda leader Osama bin Laden was perhaps the most famous Pakistani resident. He was killed by US special forces in his mansion in Abbottabad, Pakistan on May 2, 2011.

The first step toward addressing the terrorist threat emanating from Pakistan is for all relevant regional parties to acknowledge the core issues.

For India, at the top of the list of core issues is the fate of Hafiz Saeed, the alleged mastermind of the November 2008 terrorist attack in Mumbai that killed 166 people, including six US citizens.

When Tillerson visited Pakistan in October, US officials presented their Pakistani counterparts with a list of seventy-five terrorists against whom they sought action. Saeed’s name reportedly did not feature on that list.

Saeed, the chief of Jamaat-ud-Dawa (JuD)  and the co-founder of the terrorist group Lashkar-e-Taiba, has been designated a global terrorist by the United States, the United Nations, and India. There is a $10 million bounty on his head.

Saeed had been under house arrest in the Pakistani city of Lahore since January of 2017. He was released in November after a court rejected “the Pakistani government’s arguments that [Saeed] was a threat to public safety.”

Upon his release, Saeed was escorted through the city in an armored police vehicle, which was mobbed by his supporters. The JuD, which is considered by the United States and other Western nations to be a front for terrorist groups Laskhar-e-Taiba, announced that it would register with the election commission and contest in the 2018 general elections in Pakistan as the Milli Muslim League.

The gradual implementation of Saeed’s creed into Pakistan’s political fabric demonstrates the Pakistani political and military elite’s intention to legitimize extremism within the country’s institutional framework.

India’s Ministry of External Affairs and national security apparatus see Saeed’s release as further evidence of a reluctance in Pakistan to give up its strategy of shielding and supporting non-state actors that are responsible for terrorist attacks.

It is in this context that the Russia-India-China (RIC) summit in New Delhi in December proves most significant. It is important for India to work alongside Russia and China to address the challenge of extremism that proliferates from Pakistan. At the RIC summit, the foreign ministers of Russia and China agreed to India’s terms to condemn state-sponsored terror. However, while not naming Pakistan or Saeed, this trilateral commitment to an “anti-terror formulation” remains little more than symbolic. Nonetheless, it demonstrates real scope for cooperation between three of the world’s most influential emerging economies on the issue of regional counterterrorism.

While China has traditionally been reluctant to designate India’s enemies as special global terrorists, greater cooperation with India and Russia in the Indo-Pacific should set at ease Chinese concerns about their own interests. It could also usher in a new era in India’s regional counterterrorism strategy.