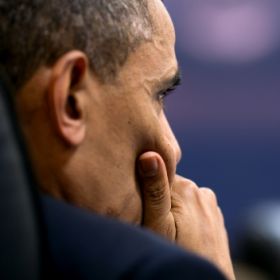 Pakistani Prime Minister Nawaz Sharif is meeting with you on Wednesday with high expectations. He is a pragmatic business-oriented politician with a powerful electoral base who has shown magnanimity and deftness in allowing opposition parties to form governments in Khyber-Pakhtunkhwa and Sindh provinces, and he backed the election of a nationalist Baloch as the chief minister in Baluchistan. While this could be seen as a policy of sharing the misery of trying to govern an ungovernable Pakistan, it could also be an attempt to work within a fractured political system. Regardless, he represents a chance to provide continuity for civilian governance in Pakistan and to build a relationship that goes beyond our immediate need to exit Afghanistan gracefully.

On Afghanistan, his advisors, both civil and military, will have told him that we need them badly; Pakistan tends to overestimate its leverage on such security issues. You will have likely been told by many yourself that we can get the Pakistanis to yield, if only we tighten the screws on them — militarily via our aid program and the use of drone strikes, and economically via threats to withhold assistance directly or from international financial institutions.

We already have some credit on the latter. Pakistan has a new loan package with the International Monetary Fund, that we supported, though it remains to be seen if they will be able to deliver on the tough policy shifts they have to make to sustain the loan. This type of international financial support is an easier way for us to help or squeeze Pakistan without bringing Congress into the game.

As for the game itself, we can play the short game, focusing primarily on Afghanistan. In that case, making smoother payments from the Coalition Support Fund, and replacing Pakistan’s heavily-used military materiel will help. Closer collaboration in helping them target their local Taliban fighters would also win points and cooperation.

Or, we could go for the long game and broaden our influence beyond the central government to the business community and the people of Pakistan. Large numbers of Pakistanis hate the United States because they have seen us support unpopular leaders, both civil and military, in the past. Sharif, a popular and business-oriented leader, appears to have the right instincts on a number of issues. He favors trade over aid, and he favors open borders with his neighbors. We could directly assist him by lowering the tariff rates on Pakistani imports, especially those on textiles — at least to the level of European countries which have already given Pakistan that concession. Call it a level-playing field. At worst, you will lose South Carolina. But we will bring the emerging and powerful Pakistani business community to our side. In turn, it will help Sharif make the case domestically for open trade with India. You could also use quiet diplomacy with India to help it work things out with Pakistan on trade and border issues while waiting for the next Indian elections in spring 2014.

We also have a substantial proportion of the Kerry-Lugar-Berman funds that have not yet been disbursed and though that aid program ends next year, you could extend it for another two years without seeking additional monies and thus use the full $7.5 billion that has been allocated. Though this is not a huge amount when compared with Pakistan’s needs, the symbolic value would be substantial.

Currently, Sharif is personally running the foreign, commerce, and defense ministries –- a tall order for any prime minister. But it allows us to deal with him on a wide range of issues at the highest level. His energy ministers are already working with our key officials and even intelligence collaboration exists, regardless of the underlying mistrust. If we can avoid looking for an obvious quid pro quo in the short run, we may be able to help the Pakistanis also play the long game.

In short, we may be able to do business with Sharif. Recall that he did help President George H. W. Bush with Somalia in the early 1990s.

You will have only a short time with him on Wednesday. Instead of having him recite his grievances, it might be better to have him define a path for the future that helps both countries, and offer to help strengthen his position at home as a result. He will get that. You do not get to be prime minister of Pakistan for a record third time without such smarts. Trust him. But tell him you will verify his moves once he gets home.

Shuja Nawaz is the Director of the South Asia Center at the Atlantic Council in Washington, D.C., and is the author of Crossed Swords: Pakistan, Its Army, and the Wars Within.