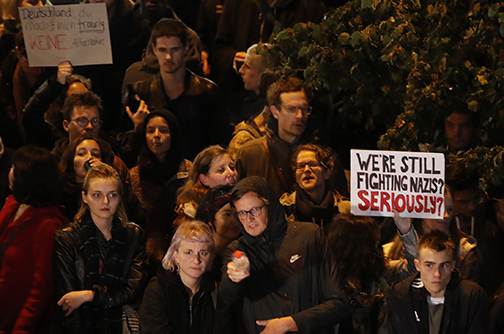 The rise of the far-right Alternative for Germany (AfD) is unwelcome news for Germany’s minorities, particularly its four-million-plus Muslim community.

German Chancellor Angela Merkel’s re-election to a fourth term in office on September 24 was marred by the fact that the AfD made history by becoming the first nationalist political party to win seats in Germany’s parliament, the Bundestag, since World War II.

Germany, along with France, is home to the largest number of Muslims in Europe. This community is relatively well integrated in society, despite claims from the far-right that Islam is an obstacle to integration.

The European Union Agency for Fundamental Rights (FRA)’s Second European Union Minorities and Discrimination Survey found that 76 percent of the European Muslims surveyed feel a strong sense of attachment to the country in which they live. This is especially true for Germany, according to the Bertelsmann Foundation. However, the FRA survey found that among the highest rates of violence motivated by hate against Muslims were reported in Germany.

With hate now entering the political mainstream, experts and civil society actors alike worry about the future of minorities who call Germany home.

Aiman Mazyek, the secretary-general of the Central Council of Muslims in Germany, said that German Muslims are “sounding the alarm” following the elections in September. The AfD’s electoral performance is worrying to Muslims and Jews in a country where Islamophobia and anti-Semitism have worked hand in hand, he added.

It remains to be seen how the other political parties in parliament will respond to the AfD’s presence.

“Germany has a strong civil society with many organizations where migrant actors rightly proclaim that there is no way back to a völkisch (populist), uniform notion of national identity,” said Sina Arnold of the Berlin Institute for Migration Research.

“More than one-fifth of the German population has migrated or has at least one parent that has migrated” to Germany, she said. “These people will fight hard for their right to remain a part of this society and challenge the rise and normalization of racism against Muslims and other visible minorities,” she added.

The AfD exploited the fear around Merkel’s policy of welcoming refugees, mainly people fleeing the war in Syria. The election, therefore, could be viewed as a referendum on the chancellor’s refugee policy and as a validation of the far-right’s narrative of cultural anxiety.

The AfD’s electoral success has proven that Germany is not immune to the wave of far-right politics that have claimed victories small and large across Europe and the United States. All 299 electoral districts shifted to the right. This is a worrying development given Germany’s recent history of nationalism.

While post-election protests reminded us that 87 percent of the German electorate did not vote for the AfD, the elections have changed the tone of German politics. Merkel is now forced to contend with unease within her own party—the Christian Democratic Union (CDU)—and the demands of the CDU’s traditional coalition partner and sister party the Christian Social Union (CSU) for a cap on the number of refugees Germany takes in.

This issue will be key in the coming weeks as Merkel seeks to form a coalition government. It will also define the political calculations within her center-right bloc moving forward, especially for districts in eastern Germany, and the CSU’s electoral prospects in Bavaria.

James Kirchick, a visiting fellow at the Brookings Institution’s Center on the United States and Europe and author of The End of Europe: Dictators, Demagogues, and the Coming Dark Age, expects an increase in xenophobic and nationalistic rhetoric in Germany.

“Long taboo, it will be inescapable now that the AfD is in parliament and will have the opportunity to speak on the Bundestag floor and be apportioned public funding,” he said. The German media, which generally avoids giving coverage to nationalistic politicians for fear of helping their cause, will also not be able to ignore the AfD any longer, he added.

Adham Sahloul is a program assistant with the Religion, Identity, and Human Rights Project at the Atlantic Council.

Image: A demonstrator held a placard during a protest against the anti-immigration Alternative for Germany (AfD) party after the general election in Berlin on September 24. The AfD became the first far-right party to enter parliament since World War II. (Reuters/Hannibal Hanschke)