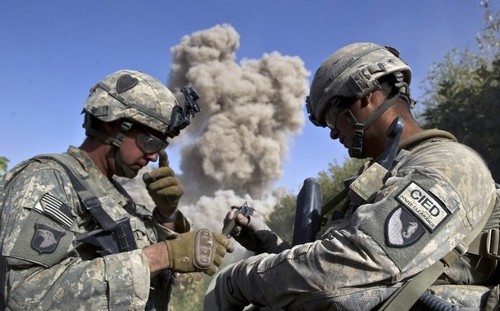 America’s 17 intelligence agencies have spent more than half a trillion dollars — more than $500,000,000,000 — since 9/11, most of it on the global war on terror, and the Obama administration still believes that if Taliban supremo Mullah Mohammad Omar Akhund were to return to power in Kabul, al-Qaida would be back too — "in a heartbeat." And this despite much evidence to the contrary.

Recent weeks have produced a number of reports about "negotiations" between some Taliban elements and the Kabul government as well as with U.S. and NATO intermediaries. There were contacts but no negotiations and none of the Taliban participants was authorized to speak on behalf of the reclusive and secretive, Mullah Omar, in hiding since the U.S. invasion collapsed his regime in October 2001.

Judging from Special Envoy for Afghanistan and Pakistan Richard Holbrooke’s appearance on Fareed Zakaria’s "GPS" program this past Sunday, there is still little knowledge of what has been in the public domain since June 14, 2001.

UPI consultant Ammar Turabi, a Pakistani-born American, and this reporter, sat cross-legged on the carpeted mud floor of Omar’s Spartan adobe house on the west end of Kandahar and listened to the reclusive war leader’s list of complaints about Osama bin Laden.

The world’s most wanted terrorist — and the scion of a wealthy Saudi family — was expelled from Sudan under Western pressure in 1996 and decided to return to the country of his wartime exploits against the Soviet Union. Omar, still consolidating his civil war victory, was paid handsomely by bin Laden, who then began setting up terrorist training camps. But it soon became apparent that bin Laden was overplaying his hand.

The 1998 terrorist bombing of U.S. embassies in Kenya and Tanzania had been planned while bin Laden was living in Khartoum. But the bombing of the USS Cole in Aden harbor was clearly planned from Afghanistan.

The $10,000 authorization for the Aden attack — which killed 17 U.S. sailors and caused $250 million worth of damage to the $1 billion warship — was found in Kabul when it was liberated.

The ideological and personality differences between the two leaders have long been misunderstood. Taliban is an indigenous movement made up of mostly ethnic Pashtuns, midwifed by Pakistan’s Inter-Services Intelligence agency to put an end to the civil war and fill a vacuum left by the Soviet retreat from Afghanistan in February 1989.

Mullah Omar consolidated his power with the title of Amir-ul-Mumineen (Supreme Commander of the Faithful) in the "Islamic Emirate" of Afghanistan, a medieval theocratic dictatorship and pitiless inquisition that deprived women of all rights — except to stay home to cook and take care of the children and to go to market covered head to foot in a burqa.

Omar and his immediate entourage made clear to Turabi, a multi-linguist, and me that any fatwa issued by bin Laden declaring jihad, or holy war, was "null and void." He explained bin Laden hadn’t completed his 12 years of mandatory Koranic studies to qualify for the position of mufti.

The Afghan supreme leader also told us bin Laden isn’t allowed any contact with the media or foreign government representatives. And bin Laden himself had finally sworn fealty to Omar in a statement published in April 2001, two months before our trip — "Amir-ul-Mumineen is the ruler and legitimate Amir who is ruling by the Shariah of Allah."

Bin Laden, the ambitious global braggadocio, was not what Mullah Omar the recluse had in mind. Some intermarriage between the two families was arranged. Between the two leaders, it was a shotgun wedding. Omar resented the worldwide publicity bin Laden was getting from invited foreign journalists, including CNN’s Peter Bergen, from 1996 through 1999, and warned him to cut it out.

The one-eyed, 6-foot-6, five times wounded guerrilla leader against the Soviet occupation, made clear to us the Taliban regime would like to "resolve or dissolve" the bin Laden issue. In return, he expected the United States to establish a dialogue to work out an acceptable solution that would lead to "an easing and then lifting of U.N. sanctions that are strangling and killing the people of the Emirate."

Afghanistan , according to Omar’s entourage, has suggested to the United States (via the U.S. Embassy in Islamabad, Pakistan) and to the United Nations that international "monitors" keep bin Laden under observation pending a resolution of the case, "but so far we have received no reply."

Aides said they had also informed the United States they were putting bin Laden on trial for his alleged crimes and requested that evidence be presented. The court allegedly sat for 30 days without evidence being presented against bin Laden. It extended its hearing for another 10 days, according to the same aides, to give the U.S. side time to act. But nothing materialized, said the aides.

Bin Laden, for his part, swore on the Koran he had nothing to do with the terrorist bombings in Kenya, Tanzania and Aden and that he isn’t responsible for what others do who claim to know him.

All our interlocutors kept telling us "the Koran forbids the taking of the lives of women, children and old people in strife, conflict and war." Omar said the bombings of the U.S. embassies in Kenya and Tanzania, which the United States says bin Laden ordered, are "criminal acts and the perpetrators are criminals and should be so judged."

It would be interesting to know whether U.S. President Barack Obama ever read what Mullah Omar had to say three months before 9/11. In his interview with Zakaria last Sunday, it became clear Holbrooke hadn’t. Unknown, too, is the Saudi link with Omar.

The diplomatic magician who engineered the 1995 Dayton Peace Accords ending the Bosnia war knows from personal experience nothing was possible without the hated Serbian dictator Slobodan Milosevic. This time change Dayton for Riyadh, Saudi Arabia. And the late Milosevic for Mullah Omar. Add Pakistan and remove Afghan President Hamid Karzai. And you may get a peace deal that would enable 44 nations involved in Afghanistan to go home.

This is a direct message to this reporter from Mullah Omar.

Arnaud de Borchgrave, a member of the Atlantic Council, is a senior fellow at CSIS and Editor-at-Large at UPI. This article was syndicated by UPI. Photo Credit: Getty Images.