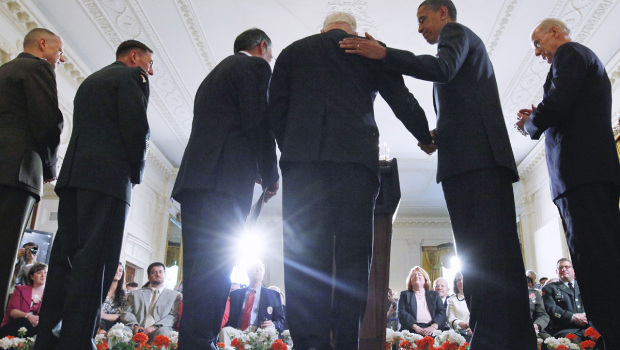 When he announced the Afghan Surge, President Obama promised a "significant" withdrawal starting in July 2011. Now, he’s set to announce the withdrawal of a mere 30,000 troops by the end of 2012, CNN reports. Thus, he’ll barely reverse the surge itself and do so much later than his announced deadline.

The announcement will be in a speech tomorrow.

President Barack Obama will give a speech on the Afghanistan troop drawdown on Wednesday, a senior administration official said Monday.

The news came hours after White House Press Secretary Jay Carney told reporters that Obama had yet to make a final decision on the size and scope of the troop withdrawal, but would do so "soon."

An estimated 100,000 U.S. troops are serving in Afghanistan, some 30,000 of which are part of the so-called surge ordered in late 2009 in a bid to control the rising violence.

Obama has said those troops would begin coming home in July, and he recently indicated the number would be "significant."

It was not clear then what the president considered significant. White House officials have not elaborated.

The president has repeatedly said he is confident the United States can meet the self-imposed deadline to begin bringing U.S. troops back from Afghanistan without compromising Afghan security, though military commanders and government officials have raised concern about the readiness of Afghan security forces.

It’s been clear almost from the moment of the announcement that there was no exit strategy. Both Defense Secretary Robert Gates and then-Central Command and later ISAF chief David Petraeus constantly minimized the significance of the July deadline. And the US agreed with the other NATO Allies to remain in Afghanistan in an active combat role through at least the end of 2014.

A CBS report notes that the speech coincides with a "a changing of the guard in Washington and Kabul."

Defense Secretary Robert Gates, who has presided over the Afghanistan and Iraq wars for four and a half years, is retiring next week. The top two American generals in Kabul — David Petraeus and David Rodriguez — are due to leave for new assignments as early as July – Petraeus as head of the Central Intelligence Agency (if confirmed by the Senate), and Rodriguez as Commanding General of the U.S. Army Forces Command. Also departing in July is the U.S. ambassador in Kabul, retired Army Lt. Gen. Karl Eikenberry, who in 2006-07 served as the top commander of U.S. forces in Afghanistan.

Their replacements will no doubt bring fresh eyes to Afghan war policy as the White House looks to wind down 10 years of conflict in the country.

Gates said during a visit to Afghanistan earlier this month that it’s too soon to adjust strategy, even taking into account the impact of the May 2 killing of al Qaeda leader Osama bin Laden in Pakistan. Gates also has cautioned against a rapid drawdown of U.S. forces. He has argued that more time is needed to pound the Taliban to the point where its leaders will feel compelled to engage in serious peace talks. On the other hand, the administration knows the U.S. public is weary of war — its human and financial costs. So spelling out a significant withdrawal plan could provide Obama with a political boost heading into the 2012 elections.

Gates, Petraeus and Navy Adm. Mike Mullen – the Joint Chiefs chairman who will retire Oct. 1 – have been among the administration’s strongest advocates of a troop-intensive approach to the war.

Leon Panetta, the CIA director who is expected to win Senate confirmation Tuesday to succeed Gates as Pentagon chief on July 1, has not been expansive in public about his views on Afghanistan.

Stephen Biddle, a defense analyst at the Council on Foreign Relations, told the Associated Press their departure could create a shift in the balance of war advice within the administration. "You’re replacing people that had a very distinct perspective and were very effective proponents of that view," Biddle said in a telephone interview Monday. It’s unlikely, he said, that the incoming team — headed by Panetta — will be as unified in its views or as effective in promoting them.  You might reasonably expect that the (troop) drawdown will be faster and deeper than it would have been" if Gates and the others had stayed on, Biddle said.

While the Surge may be ending, there’s no evidence of a broader shift. Despite public opinion having turned against the war in the US–which had long since happened in Europe–the prospect of leaving Hamid Karzai to fend for himself against the Taliban is sufficiently dismal as to make pulling up stakes a non-option. NATO will likely keep muddling through until the end of 2014–and perhaps beyond.