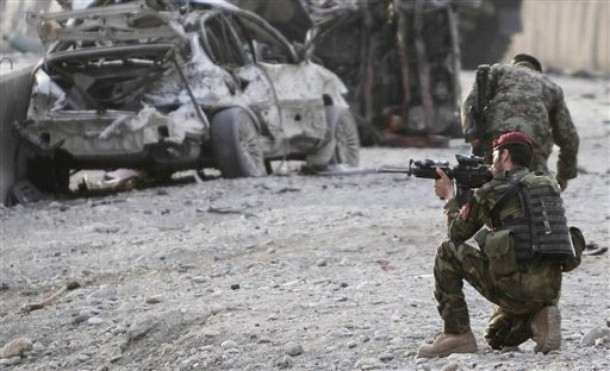 The United States and its NATO allies are having have trouble coming to grips with the fundamentals of the decade-long Afghan war.

Following the assassination of two U.S. officers on duty in the inner sanctum of Kabul’s most heavily guarded building — the Interior Ministry — U.S. Ambassador Ryan Crocker says the United States must stick it out in Afghanistan otherwise al-Qaida will be back.

But al-Qaida knows the United States is leaving in 2014 and that the exodus will begin next year. With 70 percent of the American people against further U.S. involvement in Afghanistan, U.S. President Barack Obama is accelerating the drawdown.

Afghan President Hamid Karzai and his Afghan government expect U.S. military aid to continue at the rate of $5 billion-$10 billion a year through the end of the decade. A country of 30 million the size of France will require an army of some 350,000 with its own gunships and air transport capabilities.

But nothing is less certain than congressional appetite for more billions to a country that keeps demonstrating its anti-American credentials.

The inadvertent — and harebrained — decision to torch used copies of the Muslim holy book dramatized the extent of anti-U.S. feelings among ordinary Afghans. And this comes after a decade-long, $500 billion war effort to defeat the Taliban insurgency and establish a viable democracy. Another $100 billion or $200 billion by the end of 2014 won’t change the fundamentals.

The Vietnam War analogy is hard to escape. The last U.S. soldier left Vietnam March 29, 1973. ARVN, the South Vietnamese army, with its own air support, and U.S. aid, fought on for two more years. That is, until Congress ended all further assistance to South Vietnam, a U.S. ally since the French defeat at Dien Bien Phu in 1954.

In their writings since the war, North Vietnam’s leaders said they were taken by surprise by the U.S. decision. They thought taking Saigon was still two years away. Abandoned by the U.S. Congress, ARVN stopped fighting. And the Communist army marched into Saigon unopposed.

More urgent U.S. domestic priorities could conceivably leave the Afghan government and army without the indispensable assistance they need to continue the fight against Taliban. This, in turn, could lead to some form of coalition — or a return to the kind of partition that followed the Soviet exit in 1989.

Where Crocker may have misjudged the consequences of Taliban’s return to power-sharing in Kabul or even outright power, is Taliban supremo Mullah Mohammad Omar’s view of al-Qaida.

Three months before 9/11, on June 4, 2001, Omar had already made clear that he had no use for Osama bin Laden and his international terrorists.

Under intense pressure from the U.S. and Saudi Arabia, bin Laden was kicked out of Sudan in 1996. The Clinton administration failed to express a preference about where he should be deported. So he went back to his old stomping grounds when he was fighting the Soviet occupation of Afghanistan (1979-89).

Bin Laden invited himself back to Afghanistan. At first Omar enjoyed his company — and money — and bin Laden didn’t ask for anyone’s permission to set up a score of terrorist training camps. These were all located by U.S. satellite spies.

Tarnak Farms was an al-Qaida compound of 80 mud-brick buildings, surrounded by a 10-foot mud-brick wall near Kandahar airport. One was bin Laden’s. CIA had a well-rehearsed plan to kidnap or kill him, similar to the Navy SEALs raid that killed bin Laden a decade later. But intelligence also knew of the presence of a falcon-hunting Persian Gulf prince staying in one of the buildings. The raid was canceled.

President Bill Clinton authorized one cruise missile attack on another camp where bin Laden was known to have arrived. Some 30 terrorists were killed — but bin Laden had left two hours before the first missile exploded.

Post-9/11, the U.S. invasion drove bin Laden, his family and a group of some 50 al-Qaida terrorists out of Afghanistan through the Tora Bora mountain range into Pakistan. They survived intense B-52 bombing, including a 10,000-pound “Daisy Cutter,” by escaping through a narrow gorge. Ordnance exploded hundreds of feet overhead.

The Taliban haven’t been in Afghanistan since. With Kabul liberated in 2001, intelligence said 50 to 100 al-Qaida terrorists were still in-country. The same figure Leon Panetta gave when he took over as defense secretary 10 years later.

The fact is that al-Qaida and its associated movements have found more fertile grounds in Pakistan, Yemen, Somalia, Mali, Niger, where central government authority (except for Pakistan) doesn’t extend much beyond a nation’s capital.

In Pakistan, one of the world’s nine (counting North Korea) nuclear powers, al-Qaida has far more tempting targets than in Afghanistan. With a population of 180 million, mostly very poor, it is anti-American, arguably more so than its northern neighbor Afghanistan.

Since last November, when friendly U.S. fire accidentally killed 24 Pakistani soldiers on the Afghan border, Pakistan blocked all U.S. supply vehicles, including oil and gasoline tankers, still stretched over thousands of miles of roads from Karachi to the Khyber Pass and from Karachi to Quetta in Baluchistan and on to the border at Chaman destined for Kandahar in southwestern Afghanistan.

Lost in the recriminatory brouhaha is that the U.S. original commitment was against al-Qaida, not Taliban. And they are not one and the same.