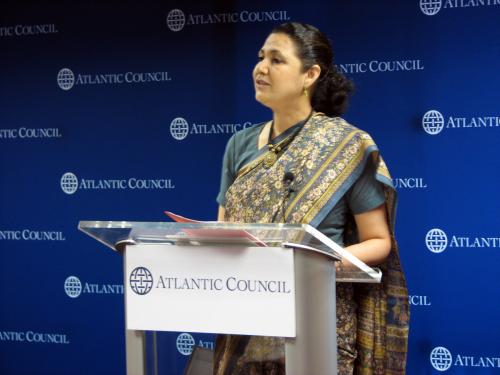 India’s new ambassador to the United States, Meera Shankar, told the Atlantic Council that her government believes it is “imperative that the United States stay the course” in Afghanistan even while conceding that “stability will require a sustained engagement.”

This is not, I am assured by Shuja Nawaz, the director of our South Asia Center, breaking news. It’s a reiteration of India’s longstanding position.  It’s a view in fact shared by all the key governments of the region, notably including Afghanistan’s.  Indeed, while Hamid Karzai’s reelection has been marred by evidence of massive fraud, all of the major candidates for the presidency wanted the United States and the NATO coalition to remain.

Alas, as is by now clear to regular readers of this site, it is not regional opposition that threatens to prematurely end the ISAF mission in Afghanistan but rather faltering commitment in the United States, Europe, and other Coalition countries.  A combination of frustration with the Karzai government, slow progress in eliminating the Taliban, success in eradicating al Qaeda Central from the country, and the realization that the “sustained engagement” Shankar spoke of likely means decades, not years, is making it extraordinarily difficult to sustain public support for expending more blood and treasure in a war that has already gone on far longer than most expected when launching it in retaliation for the attacks of September 11, 2001.

As for Shankar’s government, they “do not have nor seek a security role” out of understandable “deference to regional sensibilities.”  They are, the ambassador noted, spending $1.2 billion in development assistance for roads and other infrastructure, including several small “grass roots” projects that she believes are making a substantial difference.

Alas, it will take more than slow progress on the local level to sustain Western commitment to this fight.