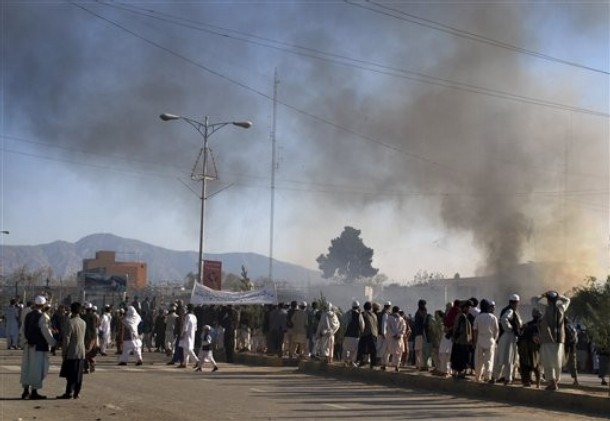 Todays’ horrific attack on the UN complex in Mazar-i Sharif may well the the Tet Offensive of Afghanistan: a strategically minor event that permanently changed the American public’s view of the war.

Details are still sketchy as of this writing but some number of foreign employees (seven, ten, or twenty have been variously reported) of the UN office were killed—two beheaded—another dozen injured after the UN Assistance Mission office was stormed and set ablaze by an angry mob, purportedly in fury over an attention-seeking Florida pastor having burned a copy of the Koran ten days earlier.

To be sure, Afghanistan is in the midst of a long war and foreign non-combatants, including those at the UN, have been attacked and killed before. But Una Moore, an aid worker in Kabul who writes for UN Dispatch, thinks "This attack is different."

Despite claims by the province governor and some Taliban leaders to the contrary, Moore insists that, "The killers were ordinary residents of a city deemed peaceful enough to be one of the first places transferred to the control of Afghan security forces. The men who broke into the UN compound, set fires and killed 8 people weren’t Taliban, or henchmen of a brutal warlord, or members of a criminal gang. They weren’t even armed when the protests began -they took weapons from the UN guards who were their first victims."

If that turns out to be the case, it’s a big deal: "Foreigners committed to assisting in the rebuilding of Afghanistan have long accepted the possibility that they might die at the hands of warring parties, but this degree of violence from ordinary citizens is not something most of us factored into our decision to work here." The effect, Moore believes, will be dramatic:

This is not the beginning of the end for the international community in Afghanistan. This is the end. Terry Jones and others will continue to pull anti-Islam stunts and opportunistic extremists here will use those actions to incite attacks against foreigners. Unless we, the internationals, want our guards to fire on unarmed protestors from now on, the day has come for us to leave Afghanistan.

Granted, the attacks were fresh when she wrote that and it’s just one woman’s reaction. But she’s not alone.

Joshua Foust, a Central Asia expert at the American Security Project, writes at his influential Registan blog that "this is a watershed event." It’s worrisome enough that a "crowd of Afghans, with no obvious ties to the insurgency, in an area otherwise so successful it was flagged for transition to Afghan control, could so quickly spiral into such madness and fury that they murdered seven foreigners who themselves had precisely zero connection to an outrageous event that happened in a third country."

Moreover, Foust contends, it’s part of a pattern: "Starting with the Serena Hotel bombing three years ago, there has been a steady increase in violence directed directly at aid workers in Afghanistan. First the insurgency, and now, it seems, regular Afghans, increasingly see those aid workers as part of the problem, and not any kind of solution."

Today’s events may well be a watershed in another way, too: further undermining the confidence of the American public in an already unpopular war that they’ve been told for months that we’re on the way to winning.

It’s notable that the atrocity took place in the capital of the Balkh province, which is among seven that had been deemed safe and slated for hand-over from the U.S. led coalition to Afghan forces in July.  With nearly two-thirds of the American public saying the war was no longer worth fighting, General David Petraeus went to Capitol Hill to urge patience. While acknowledging "setbacks as well as successes" and that "insurgents are already striving to regain lost momentum and lost safe havens as we enter the spring fighting season," the commander of NATO forces in Afghanistan declared, "The momentum achieved by the Taliban in Afghanistan since 2005 has been arrested in much of the country and reversed in a number of important area," adding "we believe that we will be able to build on the momentum achieved in 2010."

To be sure, a few instigators in an angry mob is not the same thing as a massive, nationwide attack by tens of thousands of troops. Nor, I hasten to add, have American military leaders in Afghanistan been anywhere near as rosy and unequivocal as William Westmoreland was in proclaiming imminent victory in Vietnam. For that matter, there’s no figure with the gravitas of Walter Cronkite. Then again, the fight in Vietnam was much more popular two months after the shock of the Tet Offensive than the one in Afghanistan is now.

Tet, despite its size, had little tactical impact. American forces quickly counterattacked and reversed gains from the surprise surge of forces. But the shock got the attention of a public that had gotten accustomed to a drawn out war, placated by assurances that there was light at the end of the tunnel. Mazar-i Sharif could have that impact here. If this can happen in Afghanistan’s "safe" zones after eight years of nation-building, there’s little reason to think we’re anywhere close to the end.