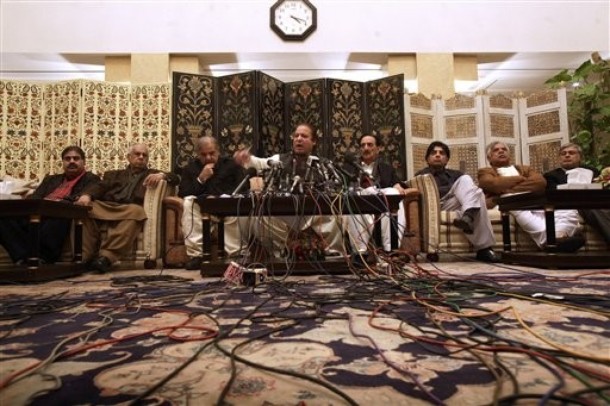 What does one call an impoverished nuclear weapons power where 80 percent of its 180 million people say things are moving in the wrong direction; 64 percent claim the United States is their enemy; 18 percent view al-Qaida favorably; almost 40 percent say they approve of al-Qaida’s 9/11 attacks on the Twin Towers; and 56 percent say there is "no hope" for the future?

One calls it the world’s most dangerous place and it’s Pakistan, with polling data from Charney Research.

In the seven Federally Administered Tribal Areas where Taliban insurgents fighting U.S. and NATO troops in Afghanistan find safe havens (when they’re not being bombed by U.S. drones), 34 percent of 3 million people told pollsters they approve of al-Qaida’s Osama bin Laden and 25 percent of the Taliban. One-third OK suicide bombings.

"We cannot treat Pakistan as part of the problem, it has to be part of the solution," concludes Charney Research.

Easier said than done. Pakistanis’ response tends to be the reverse — "We cannot treat the United States as part of the problem, it has to be part of the solution." For the Pakistanis powers that be, the solution in Afghanistan is a reformed Taliban. The Obama administration isn’t there yet.

The game changer is what the geopolitical cognoscente refer to as a mini Tet. On Jan. 31, 1968, the Vietcong launched the Tet offensive — named after the Lunar New Year truce — that saw communist guerrillas infiltrate five major cities, 36 provincial capitals, and 64 district capitals and major towns simultaneously. In Saigon, they got as far as the U.S. Embassy ground floor.

All were repelled by the end of the first day, except for the former imperial capital of Hue, where the insurgents held out for a month, executing some 2,000 local officials and police.

News reports almost unanimously described Tet as a major defeat for the U.S. despite the high cost to the communists (32,000 killed and 5,800 captured, which forced North Vietnam to send regular forces to replace Vietcong losses).

Walter Cronkite, broadcasting from Saigon, described Tet as an unmitigated disaster for the United States and on March 31, 1968, U.S. President Lyndon Johnson decided not to run again and announced a halt in the bombing of North Vietnam.

President Barack Obama wants out of Afghanistan ASAP, as do 60 percent of Americans. But he cannot afford a "mini Tet" in Afghanistan. And that’s why there is strong U.S. pressure on Pakistani army chief Gen. Ashfaq Parvez Kayani to launch a major offensive on Taliban’s principal sanctuary in North Waziristan.

As winter snow blocks many mountain passes until March, pro-Taliban sentiment is spreading in Peshawar and radiating to the seven tribal agencies that abut the Afghan border.

The recent assassination of Punjab province Gov. Salman Taseer, gunned down in Islamabad, allegedly by a member of his own elite Police Security unit, who fired an entire 30-bullet clip from an AK-47 into Taseer’s back while others looked on without any attempt to restrain him, is a tragic symbol of extremism snuffing Pakistan’s principal voice of moderation. There were 28 bullet holes in Taseer’s body.

Pakistan’s religious leaders immediately expressed approval of the assassination of Taseer because of his opposition to Pakistan’s blasphemy laws. The politico-religious leaders of five parties praised the killing in cold blood while superannuated religious fundamentalists — known as Deobandhi-Wahhabi-Salafi "fundos" — pledged the assassin would be pardoned. And they banned Muslims from attending Taseer’s funeral.

In Rawalpindi, religious fanatics and a smattering of lawyers marched with a garlanded picture of the alleged assassin.

Benazir Bhutto, the last global voice of Pakistani moderation, was also gunned down in cold blood three years ago.

Defeated in the last elections, religious parties are on the comeback trail. President Ali Asif Zardari’s writ doesn’t run much beyond the presidential palace in Islamabad. Prime Minister Yusuf Raza Gilani is portrayed as the man who presses various buttons on a command console whose wires aren’t connected to anything.

Virulently anti-American, Sharif is head of Pakistan Muslim League (N) (for Nawaz Group), and spent 10 years in exile in Saudi Arabia after failing to exile Chief of Staff Gen. Pervez Musharraf, who then assumed the presidency.

Sharif also has close links with Jamaat-e-Islami, an influential Islamic revivalist movement that developed an ideology based on the modern revolutionary view of Islam in the contemporary world. It enjoys an unknown measure of army support. And Sharif’s rightist religious leanings also generate fundo approval.

JI envisions a state ruled by Islamic law and opposes Westernization — including capitalism, socialism, bank interest, birth control and Western social mores. Unknown JI sympathizers among those in charge of nuclear weapons security is a major concern in U.S. and allied intelligence communities.

To head off a Sharif presidency following the next elections, a thinly disguised military takeover appears to have taken place. Kayani, already the country’s most powerful man, is slowly being pushed to fill the political vacuum. Pakistan is gradually slipping under military rule for the fifth time since independence, albeit still in civilian garb, at least on the surface.

It is now incumbent on Obama to give Pakistan’s military the wherewithal to roll up Taliban in North Waziristan. This will presumably simplify the Pakistani conundrum for Vice President Joe Biden as he visits Islamabad this week. But it may be a day late and a dollar short. Taliban is back in favor throughout much of the northwest whence the army drove them out in the past two years.

Arnaud de Borchgrave, a member of the Atlantic Council, is editor-at-large at UPI and the Washington Times.  This column was syndicated by UPI. Photo credit: AP Photo.