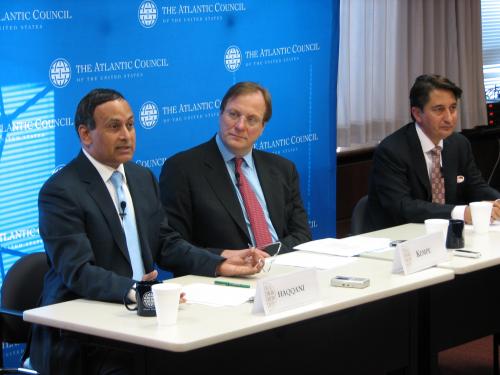 The Obama administration has brought a new emphasis to its predecessor’s policy of treating the fight against militants in the Afghanistan-Pakistan border region as part of single theater.  As a joint Atlantic Council appearance of the two ambassadors makes clear, however, it would be wise to remember that they are in fact two countries.

While Said Jawad, the Afghan ambassador to the United States was quite conciliatory, repeatedly emphasizing how much his people wanted and needed American presence in his country, Husain Haqqani, his Pakistani counterpart, wanted to make sure everyone understood that his is a proud, sovereign country that expected to be treated as an equal partner.

Indeed, Haqqani was frequently quite blunt, as in this dismissal of Obama’s recent commitment to redouble our efforts in the region: “The resources that are being committed may look big to some but very frankly, I think that a company on the verge of failure is quite clearly able to get a bigger bailout than a nation that is accused of failure.” Similarly, in response to a question from Council president Fred Kempe about a report in that day’s NYT saying the Afghan police was broken — a point Jawad readily conceded — Haqqani retorted that “Some American newspapers are broken beyond repair!” He noted that the Western media has been predicting his country’s collapse for years.

While he admired America’s can-do attitude and desire to fix things, Haqqani insisted that Pakistan is not something to be fixed but rather a sovereign country.   While Pakistan welcomes American aid in addressing the security situation and other issues, it is a proud nation.  While “accountability” is a perfectly reasonable condition when billions are being spent, “intrusiveness” is not.  Congressional conditions, often tied to performance on purely domestic matters, is unwelcome “micromanagement” that is unhelpful in establishing the trust necessary for the two countries to work as partners.  Further, the way to build trust is “by talking to us, not beating up on us.”

Jawad was much less confrontational, realizing perhaps that he was speaking from a position of relative weakness. He repeatedly noted the sacrifices Americans and others were making in his country but, at the same time, wanted to make it clear that he thought American and European security were at stake if the mission did not succeed.

Further, on more than one occasion, Jawad cited the fact that Taliban leaders were willing to negotiate with his government as a sign that — contrary to the emerging outside consensus — the fight against them is being won. Further, while fully agreeing that “democracy can not be imposed” from the outside, pluralism is essential to achieving the core mission of opposing “tyranny and terror.” He argued that this was not the pipe dream many Westerners imagine, noting that his country had democratic elections and even women in parliament as early as the 1960s.

Both men agreed on two major issues, however,  First, defeating violent extremists — al Qaeda and the ideological Taliban — was the top priority.  Second, doing this and sustaining victory will require substantial, long-term commitment of resources toward state-building.  For both Pakistan and Afghanistan, much work is needed in nation-building and ensuring that men have a means of earning a living and providing for their families other than illicit activity.