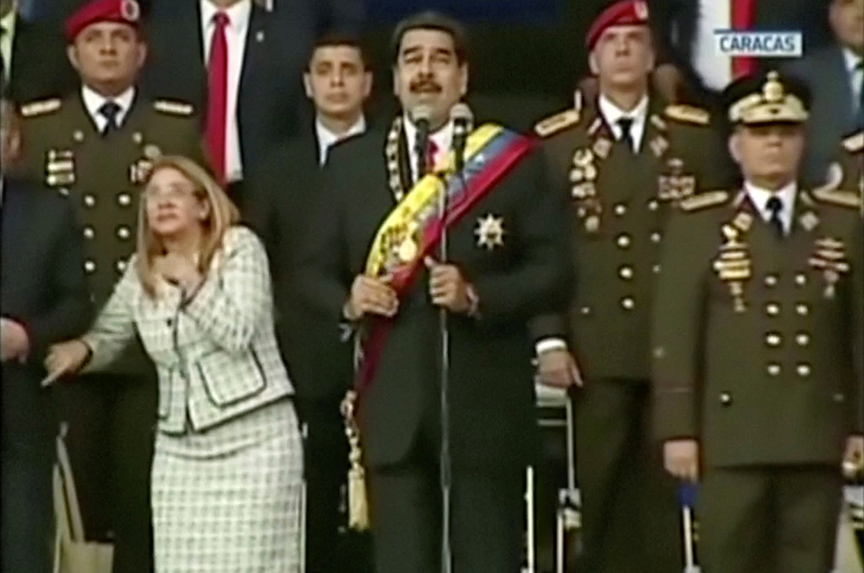 The Venezuelan regime will likely turn even more repressive in the wake of a purported attempt to assassinate President Nicolás Maduro in Caracas on August 4, according to Jason Marczak, director of the Atlantic Council’s Adrienne Arsht Latin America Center.

Maduro was delivering a speech at a celebration of the 81st anniversary of Venezuela’s National Guard when what in initial reports were described as low-flying drones exploded in midair. The attack sent assembled National Guard troops scurrying for cover. Maduro was unharmed and blamed Colombian President Juan Manuel Santos for the attempt on his life.

Marczak was reluctant to agree with Maduro’s characterization of the incident as an assassination attempt. “Yesterday’s incident is one more example in a long list of events that show the fragility of the regime, and will likely prompt it to take even more drastic measures,” said Marczak.

Already, Marczak added, Venezuelan “intelligence services have been ramping up their persecution of those in opposition to the government and are combing through the ranks of the military to squash dissent.”

Maduro has presided over a spectacular economic collapse in Venezuela, an oil-rich nation. Food and medicine are in short supply. Previously controlled diseases, such as malaria, are breaking out in the most populous areas at levels not seen in the past seventy-five years.

A national door-to-door poll conducted by the Atlantic Council in Venezuela in March found that more than eight in ten Venezuelans believe that the country is mired in a humanitarian crisis, more than nine in ten Venezuelans consider food and medicine supply to be insufficient. Chavistas were among those polled.

Venezuela’s neighbors, including Colombia, have been deeply impact by the humanitarian crisis unfolding in Venezuela as refugees pour across the border. In the past few years, more than 1.5 million Venezuelans have fled Venezuela, according to the United Nations Refugee Agency (UNHCR). On August 2, Colombia’s Santos granted 440,000 Venezuelan refugees two years of help. “The whole world is increasingly terrified of what is happening in Venezuela,” Santos said. Maduro has refused to accept international humanitarian assistance.

In the midst of this crisis, Maduro has sought to tighten his grip on power. In May, he was declared the winner of an election that extended his term until 2025. Experts denounced the election as a sham and the United States and several Latin American countries refused to recognize the outcome. Popular opposition leaders were sidelined by virtue of either being in prison, in exile, or banned by the government from running for office.

Maduro has blamed the dire conditions in Venezuela on US, European Union, and Canadian sanctions. Speaking at the Atlantic Council on April 30, Michael Fitzpatrick, deputy assistant secretary in the State Department’s Bureau of Western Hemisphere Affairs, called this a “false argument.”

Jason Marczak discussed developments in Venezuela in an e-mail interview with the New Atlanticist’s Ashish Kumar Sen. Here are excerpts from the interview.

Q: Do you expect the purported assassination attempt to shore up popular support for Maduro and give credence to his conspiracy theories?

Marczak: Maduro suffers from weak popularity as consistently shown in Atlantic Council polls. Yesterday’s explosion—I am apprehensive to draw the conclusion that it was an assassination attempt—will not make him more popular among the very Venezuelans who struggle to survive every day due to his and his government’s corruption and mismanagement of the economy. What is unclear is who orchestrated the explosion and whether in fact it was what Maduro says—an assassination attempt—or just a rouse to give him an excuse to roll out a next phase in authoritarianism under the cloak of trying to maintain order. We have heard conspiracy theories in Venezuela ever since Chavez came to power. This is nothing new.

Q: Could this incident weaken Maduro’s hold on power?

Marczak: Maduro’s grip on power is already weak. The intelligence services have been ramping up their persecution of those in opposition to the government and are combing through the ranks of the military to squash dissent. Meanwhile, store shelves are empty, lines form before daylight to get the little food that’s available, and diseases long rooted out from Venezuela have come back in full force. Oil production is at historic lows, thus denying the country its major source of revenue.

Yesterday’s incident is one more example in a long list of events that show the fragility of the regime, and will likely prompt it to take even more drastic measures.

Q: Maduro has blamed Colombia for orchestrating the alleged assassination attempt. What impact has the crisis in Venezuela had on its neighbors, particularly Colombia, and is there a concerted effort by the leaders of these nations to end Maduro’s hold on power?

Marczak: Chavez and then Maduro have been consistent about blaming external forces for incidents in Venezuela. Maduro refuses to acknowledge his minimal support within the country. For Venezuela’s immediate neighbors—Colombia and Venezuela—the Venezuelan crisis is rapidly spilling over the border, with tens of thousands of migrant and refugees arriving by the day. Many stay and many then go on to other countries across the region.

For Colombia, which is the primary destination of Venezuelans, the large humanitarian influx is placing a severe strain on government services. The United States and the European Union have pledged tens of millions of dollars to Colombia but much, much more will be needed. With the rapid deterioration in Venezuela, migration numbers will only ramp up.

What Venezuela’s neighbors want—and frankly, what like-minded democracies around the world want—is a restoration of democracy, of civil liberties, and an opening of humanitarian channels to help innocent Venezuelans who are suffering and dying as a result of the regime’s ill-conceived policies.

Image: Venezuelan President Nicolás Maduro, pictured in this still frame taken from video of an event in Caracas on August 4, and his wife, Cilia Flores, reacted to what was believed to be an attempt to assassinate the Venezuelan leader. (Venezuelan Government TV/Handout via Reuters TV)