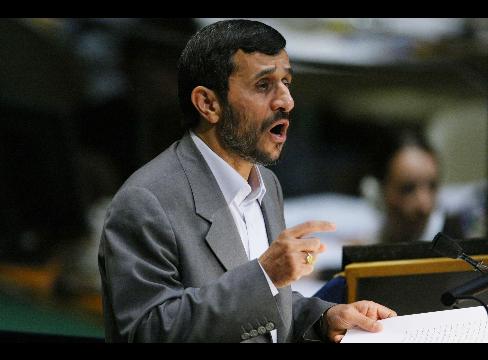 The questions I had scribbled in my notebook, going into what would become a three-hour dinner meeting with Iranian President Mahmoud Ahmadinejad, were key to knowing how dangerous he might be. 1) How much power does he have? 2) Is he as deranged as his rhetoric would suggest? Behind the first question was whether he shapes issues of peace and war in Iran, since he regularly pronounces on them. Or does he remain a distant second fiddle on foreign policy to the ostensibly more reasonable Ayatollah Ali Khamenei, the supreme leader of Iran? The second issue goes to whether Ahmadinejad would, if he could, push the nuclear button, leak weapons material to extremists or, at the very least, keep Iran on a confrontational course with the West and Israel. Given the growing inevitability of an Iranian nuclear capability, does he see himself as having a sacred calling that defies reasonable negotiation and thus might welcome war?

Sitting near enough to Ahmadinejad to exchange glances as his slow, brilliant white smile forms in pleasure at his own verbal dexterity, I had to remind myself that this was a man who favored Israel’s elimination, questioned the Holocaust, denied that Iranian gays exist and was defying the international community in a quest for nuclear weapons. Calm, Articulate In the flesh, Ahmadinejad is less powerful and comes across as far more rational than is his reputation. It is less what he says than how he says it that intrigues during the long dinner among some 50 scholars and journalists around a single, large table at New York’s Intercontinental Hotel. Ahmadinejad throughout is self-possessed, calm, measured, articulate and sometimes even a bit humorous, ready to go on even longer when our Iranian hosts call a close. Through simultaneous translation, Ahmadinejad uses the first hour to take some 23 questions and comments (he stresses his preference for hearing others’ opinions). He scribbles as he listens, then responds, each time repeating the interlocutor’s name. Before his responses, however, the president gives what he calls theoretical context with a half-hour statement on the relationship between God and man. Which brings me to reflect on his power in Iran, as the carefully written speech is less for us than it is for a home audience that would see him bringing truth to heathens. When the question is asked who had what power in Iran, he ducks it. Yet his entire trip to the U.S. serves to shore up his domestic position, which has been weakened by poor economic performance. Home Front His showing last week in New York no doubt helped his standing at home, as do routine attacks from the West and President George W. Bush that bring no serious consequence. My Sunni Arab friends say Ahmadinejad is far more popular on the Persian and even Arab street, although he is Shiite, than Osama bin Laden. After all, unlike bin Laden, he’s not hiding in a cave and openly endorsing murder of innocents. By that measure, Columbia University President Lee Bollinger played into his hands last week with his introductory attack on campus. Though it was probably popular with donors, it could only boost Ahmadinejad’s position at home as the invited guest suffering personal indignities. As for his sanity, the scholars — though by no means psychological experts — were taken with the ease and tact with which Ahmadinejad tackled difficult questions, ducking and weaving with political skills that even American presidential candidates might envy. Deflecting Comparisons When asked about the increasing retributions for those Iranian scholars who interact with the West and hearing specific names of some who are now in prison, he wondered aloud which country had more of a prison problem, when the U.S. has 1.2 percent of its population behind bars against Iran’s comparative 0.2 percent level. Gary Sick, an expert on Iran at Columbia’s School of International and Public Affairs, called him on the flawed logic, but by then he was on to the next question. When asked about comparisons some make of him to Adolf Hitler, he showed he was also a politician who could learn what works with which audience. He called Hitler’s role “extremely negative” and having nothing to do with Iranian culture. “The war he planned claimed over 60 million lives and Hitler’s image to us is despicable,” he said. The shrewd smile followed as he asked whether he looked or talked like Hitler. `We Are Prepared’ Asked by Philadelphia Inquirer columnist Trudy Rubin whether a war (particularly one that might destroy Israel) might speed the return of the Mahdi, the savior in Shiite Islam, he responded, “We believe the Mahdi will arrive so there will be no war, in order to bring peace and justice.” The Iranian ambassador to the United Nations whispered in his ear, and he added, “He will arrive along with Christ to spread compassion.” When asked whether Iran wasn’t sliding toward war with the U.S., given Iran’s continued intransigence on nuclear matters, he answered calmly, “Mr. Bush is interested in harming Iran. But I believe there are wise politicians in America who will prevent such a war. We are prepared for every scenario. Yet I don’t think war will happen.” Is he afraid? “Iranians aren’t afraid,” he said. “The example is the person sitting before you right now.” He shows that big, white, slow smile again — which he holds for dramatic effect. I leave wondering whether Ahmadinejad is the world’s most dangerous leader — or just the most hyped. But is he deranged? If so, like a fox.