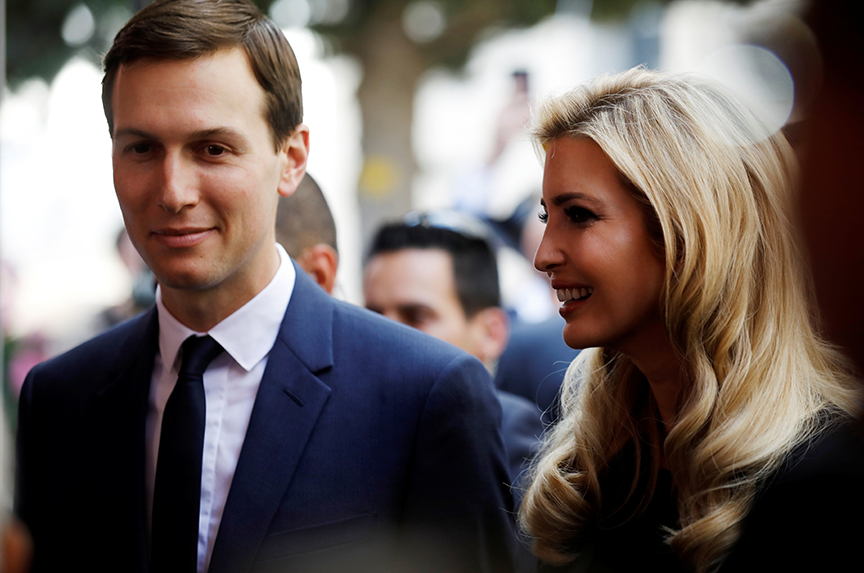 Massive protests have erupted in the Gaza Strip on May 14 as the United States relocated its embassy from Tel Aviv to Jerusalem, becoming the world’s first nation to have an embassy in the holy city.

On December 6, US President Donald J. Trump announced his decision to recognize Jerusalem as the capital of Israel and to shift the US Embassy from Tel Aviv to Jerusalem—the two cities are about an hour’s drive apart.

The decision is a controversial one. Palestinians turned out in large numbers to protest the decision. At least fifty-two Palestinians were killed by Israeli gunfire at the Gaza border. Health officials said 2,400 Palestinians were wounded, hundreds of them by live bullets. Protests were also reported in the West Bank.

Trump’s daughter, Ivanka; son-in-law, Jared Kushner; and Treasury Secretary Steve Mnuchin were part of the US delegation in attendance at the ceremony in Jerusalem. Israeli Prime Minister Benjamin Netanyahu was present, too. The ceremony coincided with the seventieth anniversary of the founding of the state of Israel.

Following the Six-Day War that took place from June 5-10, 1967, Israel annexed East Jerusalem in a highly controversial move that is still not recognized by the international community.

Even though the Israeli government officially considers Jerusalem to be its capital, and Israel’s parliament, president, prime minister, and most ministries are based in Jerusalem, all foreign embassies are located in Tel Aviv.

While Israel claims Jerusalem in its entirety as its “eternal, undivided” capital, the Palestinians claim East Jerusalem as the capital of a future Palestinian state. Jerusalem’s holy sites are revered by Jews, Muslims, and Christians alike.

The Trump administration’s decision to move its embassy to Jerusalem made no reference to the Palestinian claim.

Significance of the US decision

In 1995, the US Congress mandated that the US Embassy be located in Jerusalem. For more than two decades, US presidents—Republicans as well as Democrats—have signed a waiver every six months that allows them to delay moving the embassy from Tel Aviv to Jerusalem on national security grounds.

On the campaign trail, Trump vowed to move the US embassy. By keeping his promise he has made the United States the only country in the world to have an embassy in Jerusalem.

James B. Cunningham, a nonresident senior fellow in the Atlantic Council’s South Asia Center, served as the US ambassador to Israel from 2008 to 2011. In an earlier interview with the New Atlanticist, he recalled that even as he was based in Tel Aviv he spent a considerable amount of time in Jerusalem.

“That’s where most of the government offices are so most of the times that I had meetings with the Israeli government—apart from at the Ministry of Defense, which is in Tel Aviv—they were in Jerusalem,” Cunningham said. “I was there on a regular basis; at least several times a week.”

For now, the US ambassador and a small staff will move to the US consular compound in the southern Jerusalem neighborhood of Arnona. Most of the 800-plus embassy workers will not move from Tel Aviv until a new embassy building is constructed. That could take several years.

“Under today’s security requirements, it is not very easy to take over an existing facility and use it as a permanent embassy,” said Cunningham.

“Under normal circumstances, it takes a number of years to build a new embassy, as we have seen in London and elsewhere,” he added.

The United States’ allies in the Middle East had cautioned Trump against moving the US Embassy to Jerusalem. Jordan’s King Abdullah warned that the decision would have “dangerous repercussions” for the Middle East; Saudi Arabia’s King Salman rejected the plan altogether; Egyptian President Abdel Fattah el-Sisi advised Trump not to “complicate” matters in the Middle East; while Turkish President Recep Tayyip Erdoğan called the decision a “huge mistake” and said Turkey would open its own embassy in East Jerusalem, which he said Muslim leaders should recognize as the capital of Palestine.

Trump did not heed these warnings.

“If you’re not prepared to recognize that Jerusalem is the capital of Israel and that’s where the American Embassy should be, then you’re operating on a completely different wavelength,” Bolton told ABC’s This Week on May 13. “Recognizing reality always enhances the chances for peace.”

Palestinians protested the decision and more protests are expected this week. The day after the embassy is formally relocated is the 70th anniversary of what the Palestinians call the “nakba”—Arabic for catastrophe—when 700,000 Palestinians were uprooted from their homes during Israel’s creation in 1948.

Palestinians participated in large protests in the Gaza Strip on May 14. Dozens of Palestinians were killed by Israeli gunfire at the Gaza border. Children were among the dead. Israel’s army said its troops were operating “in accordance with standard procedures.”

Repercussions for the United States

Cunningham said Trump’s embassy decision has already had repercussions for the United States in the Middle East.

“It has made it more difficult for the United States to play the role that it has traditionally played in the Middle East regarding Israel,” he said. “The Palestinians are in a very rejectionist position vis-à-vis engagement with the United States. It has made talking about a peace and stability, even in the absence of prospects for negotiations in the near term, more difficult.”

“It has called into question whether the United States can play the kind of brokering role it has tried to play in the past with Israel and other countries in the region,” he said.

Cunningham said besides not being in US interests the embassy decision is also not in Israel’s interest.

The State Department said in a statement that the Trump administration is committed to brokering a lasting peace deal between Israelis and Palestinians.

“We are not taking a position on final status issues, including the specific boundaries of Israeli sovereignty in Jerusalem, nor on the resolution of contested borders,” it said.

In another interview in December 2017, soon after Trump made his embassy decision, Cunningham said the announcement was “potentially, a pretty serious mistake.”

“If you’re going to upend decades of US policy, it ought to be for a good reason and for a significant political and diplomatic gain. I don’t see that either of those two are attained here,” said Cunningham.

Trump’s announcement “doesn’t change the reality that the status of Jerusalem as a capital for Israel and the Palestinians is a core issue for negotiations that will need to be addressed no matter what we say,” he added.

Image: US President Donald J. Trump’s senior advisers—son-in-law Jared Kushner and daughter Ivanka Trump—attended a reception at the Israeli Ministry of Foreign Affairs in Jerusalem on May 13 ahead of the moving of the US Embassy to Jerusalem. (Reuters/Amir Cohen)