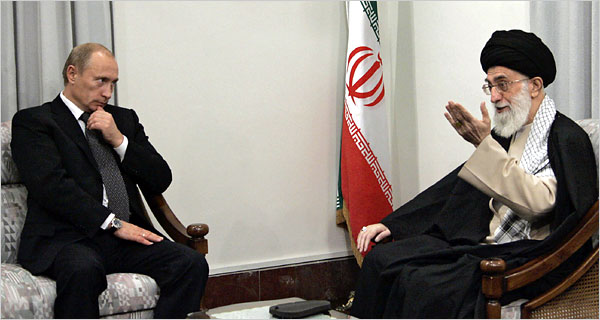 An obvious attempt at point scoring after President Obama’s  open mic comment asking his Russian counterpart to “give me space” because “After my election I have more flexibility,” Romney’s comment has sparked an intense debate.

The Los Angeles Times asked several experts whether Russia was in fact America’s #1 geopolitical foe and, if not, who is.

Among them were Atlantic Council Board Director and former Under Secretary of State for Political Affairs Nick Burns, who declared, “Iran is, without any question, the No. 1 geopolitical foe of the United States. Iran is the leading funder and supporter of terrorism in the Middle East. It has worked against our interests in both Iraq and Afghanistan. And, most importantly, Iran’s pursuit of a nuclear weapons capability directly threatens the U.S., Israel and the Arab states. Should Iran become a nuclear weapons power, it would undermine our most important interests in the Middle East. ”

Joining him in that assessment was Barry Pavel, director of the Council’s International Security Program, who added, “When Iran acquires nuclear weapons, the world will be a much more dangerous place.”

Iran is certainly a plausible contender for the title. But so is Russia.

In a follow-up question from CNN‘s Wolf Blitzer, “You think Russia is a bigger foe right now than, let’s say, Iran or China or North Korea?” Romney explained his answer.

I’m saying in terms of a geopolitical opponent, the nation that lines up with the world’s worst actors.  Of course, the greatest threat that the world faces is a nuclear Iran.  A nuclear North Korea is already troubling enough.

It is always Russia, typically with China alongside.

And – and so in terms of a geopolitical foe, a nation that’s on the Security Council, that has the heft of the Security Council and is, of course,  a massive nuclear power, Russia is the geopolitical foe and – and the – and they’re – the idea that our president is – is planning on doing something with them that he’s not willing to tell the American people before the election is something I find very, very alarming.

Now, again, let’s stipulate that the last part of this is election year hype. While Russia is in fact the country with the ability to pose an existential threat to the United States because of its vast nuclear arsenal, few serious analysts think there’s any real risk of nuclear conflict between the former Cold War rivals.

That said, Romney is certainly right that Russia is the most significant geopolitical player actively opposing major American interests. While China is generally touted as the bogeyman for those desperate to find a “peer competitor” against which to justify massive military spending, it’s a regional power with limited global ambitions. Russia, by contrast, has ambitions which directly counter our own in the area that has traditionally been the focus of American foreign policy: Europe.

Iran is an isolated player with no reach beyond its neighborhood. Yes, it’s a major supporter of terrorist groups. Then again, so is Saudi Arabia. Yes, it’s seeking to acquire a nuclear weapon. Then again, Pakistan and North Korea already have them.  Yes, it uses its status as an energy exporter to gain leverage beyond its weight. Then again, so does Russia.

Russia is certainly seen as a threat by the countries in its “Near Abroad.” It invaded and occupied Georgia months after NATO declared its future membership a sure thing. Many if not most of NATO’s newest members see Russia as far and away the number one threat facing them and wish the Alliance would turn its focus back to Article 5.

Further, as Romney notes, Iran would be less of a threat if Russia were on our side in seeking to contain that threat.

Of course, as Larry Korb and David Speedie note in the LAT piece, the fact of the matter is that “America’s #1 geopolitical foe” is an outmoded concept. While Iran, Russia, and others do pose real problems for US national security interests, we’re so far and away the most powerful actor on the planet that the notion of “#1 geopolitical foe” is largely meaningless. The Soviet Union fit that description; nobody left standing does.

James Joyner is managing editor of the Atlantic Council. Photo: Race For Iran.