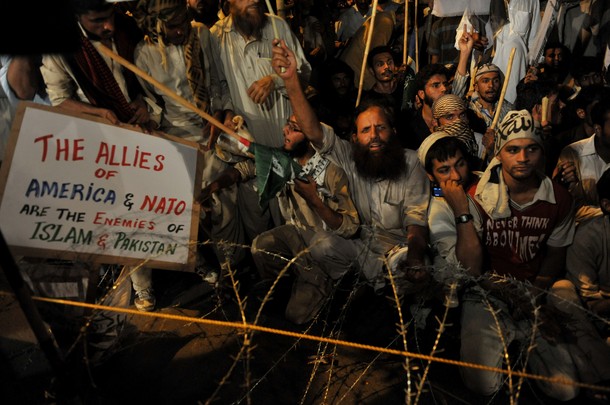 Pakistan’s decision to reopen NATO supply lines after eight months of rancorous exchanges over the killing of 24 of its soldiers by American forces at a border post is a belated exercise in damage control. Precious time has been lost; the few shreds of trust remaining between the two countries have been stretched to the breaking point.

The agreement has immediate operational significance for US forces in Afghanistan, but has left a host of contentious issues unaddressed. Foremost among these is the anger in Pakistan about the ongoing drone attacks on its northwestern tribal areas and the alleged interference of American intelligence and private security agencies in its internal affairs. There was bravado in Pakistan following the Sahala border incident: demands for an immediate apology; assurance that similar incidents would never recur; an end to drone attacks; drastically higher transit fees: and a refusal to permit transportation of military hardware on NATO trucks. The Pakistani demands have not been met and the elusive apology came instead as a bland expression of regret by the US Secretary of State.

Delays in reaching an understanding with Washington had less to do with American high handedness than with the dysfunctional nature of the civil-military relationship in Pakistan. Believing they were indispensable for the war effort in Afghanistan, Pakistanis asked for too much. With the military high command playing for high stakes in post-2014 Afghanistan, the decision on the supply routes was left in the hands of an emotionally charged parliament, which further weakened Pakistan’s case for an apology. The ultimate miscalculation, however, was in appreciating the lengths to which the United States is prepared to go to secure its strategic interests, paying billions instead of millions of dollars when necessary.

A better grasp of transnational trends might have averted Pakistan’s withering standoff with the USA. The Pakistan People’s Party government for one can learn a great deal from Zulfikar Ali Bhutto’s understanding of international politics. Reacting to Washington’s decision in April 1967 not to resume military assistance to Pakistan and India after the 1965 war, Bhutto attributed it to the imperatives of an escalating war in Vietnam. He characterized American policy towards Pakistan as a ‘Please-Punch’ approach. To achieve its national objectives, the US pushed Pakistan closer into its global orbit with a gesture to ‘please’ in the form of economic assistance. This was followed by the ‘punch’ and another round of economic palliatives. The US would continue imposing its strategic objectives until Pakistan drew the line and said ‘no further.’

If Pakistanis want to avoid being subjected to America’s ‘Please-Punch’ strategy, they will have to manage their internal fault lines better than they have demonstrated of late. The stresses in the Pakistani-US relationship will remain so long as the military makes strategic decisions and a civilian government meekly endorses them as part of an unshakeable national security paradigm. Secretary of State Hillary Clinton went out of her way to say that American interests in Pakistan were not limited to securing short-term operational assistance from the military. The Kerry-Lugar Bill seeking to establish civilian control over the military, and specifically the intelligence agencies, has been a red rag for the Pakistani military. Most of the Coalition Support/Kerry-Lugar funding has yet to become available. Of this $20 million was allocated to the Lahore based Rafi Peer puppet theatre to produce a Punjabi version of Sesame Street. The abrupt withdrawal of the funding is being seen as signposting the American intention to disengage from Pakistan.

There are Americans who think they have pleased more than punched Pakistan, a testy ally who needs to be put in its place, and feel India can better serve their interests in Afghanistan. It remains to be seen how far this perspective results in the framing of a new American policy towards Pakistan. If history is anything to go by, the US is not helping its own cause of wanting to leave the region with some measure of stability. With even the few morsels directed at strengthening civil society and democratic processes threatened by American disinterest, if not disengagement, the focus overwhelmingly remains on ensuring the operational cooperation of a Pakistani military whose interests are said to pose the biggest danger to US purposes in Afghanistan. Whether America can afford to abandon a nuclearized Pakistan, far less a politically unstable one, is a weighty question that can be viewed through the distorting prism of an impending military withdrawal from Afghanistan only at considerable risk.

Ayesha Jalal is a senior fellow with the South Asia Center and is also the Mary Richardson Professor of History at Tufts University and a MacArthur Fellow.