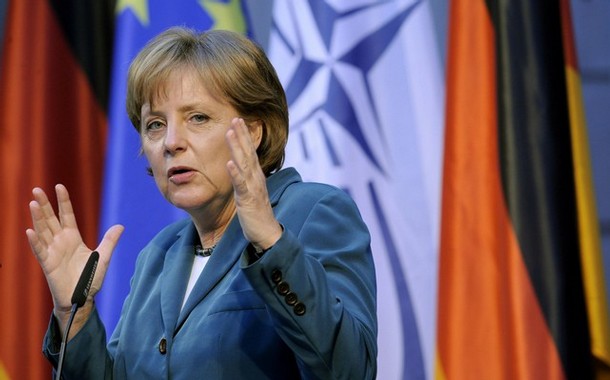 To help illustrate Germany’s historic dilemma as it calculates the risks of rescuing Europe, Ronald Freeman, a London banker friend, conjured up an image of Chancellor Angela Merkel as a weary mountaineer leading a perilous rock climb. Still some distance from safety, Merkel alternates between shouting instructions to those hanging behind her on a taut and fraying rope, and wondering whether to take out her knife and cut loose some of the burden.

What Merkel must calculate, says Freeman, a former European Bank for Reconstruction and Development first vice-president, is how to get everyone to the top of Mt. Europe without imperiling herself. “Until Germany agrees to switch from specific and inadequate bail-outs of over-indebted sovereigns to the unlimited back-up that only the European Central Bank can provide, the crisis will not end,” he says, leaving countries like Greece, Spain and Italy dangling below an ambivalent Germany.

Investors last week applauded Germany’s agreement to provide weaker climbers the equivalent of a temporary ledge to stand upon: access to Europe’s permanent bailout fund to provide capital directly to troubled banks anywhere in the euro area. In return, governments agreed to give banking oversight to European authorities so that they could supervise and potentially dismantle banks.

Although the decision marked a change of German heart, it neither addressed the urgency of the crisis (the banking supervision won’t be put in place until year’s end) or the scale of capital required (the roughly 500 billion euros that would be available is less than a third of what the U.S. Treasury considers necessary). Beyond that, Merkel is holding the rope at a time when German public support for the single currency is eroding. A recent Pew survey shows that more than half of Germans say their country would have been better off without the euro, and only two in five Germans have a favorable opinion of the European Central Bank.

In a thought-provoking analysis of what they call “the new German question,” European Council on Foreign Relations analysts Ulrike Guérot and Mark Leonard, who is also my Reuters Opinion colleague, explain much of Germany’s indecisiveness during the ongoing crisis. “There is not yet a new national narrative about what Germany should be or wants to be – or what place in Europe it wants to occupy.” They see Germany as passing through a dramatic moment of self-examination and reinvention, a “kind of unipolar moment,” perhaps even laying the foundation for a new Sonderweg, or special path, where it is increasingly assertive in promoting European economic policies even as it charts its own relations with larger powers like China and Russia.

Given German history, any process of realignment could be wrenching for Europe and the world. As Guérot and Leonard remind us, quoting the prewar German satirist Kurt Tucholsky: “Nothing makes the Germans lose their composure as much as when trying to find themselves.”

That said, it seems to be more common sense than historical neurosis that informs this new German thinking. “Germany wants to be responsible and respected,” says Peter Behr, a principal at the financial advisory boutique Signet Ltd. “It is aware of its own history and all of its existential geopolitical significance, and of the social value of currency stability and low inflation. It understands the direct and indirect benefits to it of European economic prosperity and political stability, but is unwilling to endlessly and in the end pointlessly underwrite those, especially when wholesale structural reforms are essential for the future of both.”

A new generation of Germans has grown weary of lectures about history’s lessons. It isn’t yet ready to seize the full responsibility of European leadership, and instead is focused primarily on what it will take to ensure that Germany doesn’t lose its hard-won gains of low unemployment, high productivity and steady growth, which has made it the world’s second-largest exporter after China.

Because of that, Germans shrugged off the recent warning issued to Chancellor Merkel from her 93-year-old predecessor Helmut Schmidt. “More than once we Germans have caused others to suffer because of our position of power,” he said, warning her against making excessive austerity demands on smaller European nations.

They also paid little heed to a George Soros appeal, issued in an interview with Der Spiegel Online, that Germans should play the modern-day role of benevolent power, as America did after World War Two through the Marshall Plan. Although the economic cost was great, he argued, the geopolitical benefit was greater.

Somewhat more appealing to Germans is Tony Blair‘s advice to Financial Times editor Lionel Barber that individual European states can only defend their interests as a collective against the might of the Americans or the Chinese. “The rationale for Europe today is not peace; it is power,” he said.

There is no doubt that Germany is currently in its most influential position of European leadership since World War Two. Yet one doesn’t feel a sense of historic urgency when visiting the country, but rather a desire, if possible, to protect an increasingly threatened status quo. While Greece, Spain and Italy are all suffering different degrees of economic pain, the worst that has befallen Germany recently was the 2-1 loss to the Italians in the European soccer cup semifinals.

Which brings us back to Chancellor Merkel as the mountain climber weighing her choices in the face of Europe’s growing burdens. With an eye to history, she looks down-mountain and appreciates how far Europe has already advanced. With a view to the future, she understands the benefits of bringing all euro zone states safely to the summit.

Yet Chancellor Merkel most importantly must survive in the moment. If the weather again turns worse, count on her to think of Germany’s well-being first.