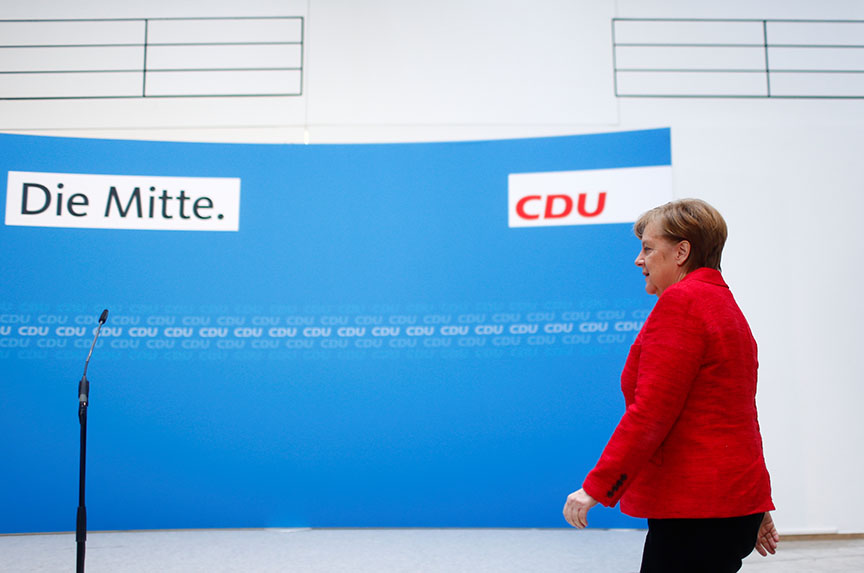 Now that the new German government has been approved by the political parties and can finally begin work, it is time for Angela Merkel to think about her own agenda for the next few years.

At the start of her fourth—and presumably last—term as chancellor, she is politically weaker than she has been before, and thus must save her energy and influence for a few key issues. Merkel should never be underestimated—she is a survivor and could yet see reinvigorated public support and renewed political power. But the logical choice right now is for her to focus on issues that will build her legacy in Germany, in Europe, and in the world, including the transatlantic partnership.

Even though Merkel’s Christian Democratic Union (CDU) party suffered a decline in its percentage of votes in September from the previous election, it should not overshadow the fact that Germany overall is in very good shape.  Twelve years of Merkel have left the country with 2.2 percent growth in GDP last year and 3.6 percent unemployment, which is extremely healthy.

The challenges facing Merkel in Germany’s domestic arena have less to do with the economy and much more to do with a growing alienation and anti-establishment temper of some Germans, as witnessed by the political rise of the far-right Alternativ für Deutschland (AfD).

This extremism has grown across Europe, especially in the wake of the financial crisis and the arrival of more than a million migrants in 2015, many of whom have settled in Germany. In a rare display of political recklessness, Merkel embraced these migrants, telling German citizens “we can do this” as trains loaded with Syrian refugees and others arrived in Germany.

This was a courageous and laudable action by a politician known for her caution, but it has left Germany with about 800,000 new residents, many without language skills and unfamiliar with German culture.  Merkel now must lead the effort to integrate these new residents and to convince Germans that those who deserve to stay also deserve tolerance, respect, and assistance. As a woman from the East—and a politician often regarded as comforting “Mutti Merkel”—she can provide the combination of leadership and reassurance that will be needed across German society.

Merkel’s other domestic priority should be to ensure a smooth transition to her successor. Neither Germany nor Europe needs a gap in leadership when the chancellor inevitably decides to step down, mostly likely during the second half of this term.

Merkel is not known for her willingness to share power, but now she must find a way to groom a successor for CDU leadership. Whether it is Annegret Kramp-Karrenbauer or Jens Spahn or someone else is less important; but it must be someone with credibility and experience not only in Germany but on the European stage as well.

Inevitably, much of Merkel’s fourth term will focus on Europe and it is here that her legacy will either shrivel or blossom. She now has a capable and charismatic French partner with whom she can push for some needed reforms in eurozone governance and the European Union more broadly. She will constrain some of French President Emmanuel Macron’s more ambitious ideas, such as a eurozone budget, and will stay clear of any real move toward debt mutualization. But she will likely push for a stronger banking union and European Monetary Fund, and perhaps even a eurozone “finance minister.  With other EU leaders, she must find an effective way to push Poland and Hungary to stay within the bounds of EU laws, while also making a stronger case for Europe to their Euro-sceptic citizens. She must also play a key role in keeping the EU unified as the United Kingdom moves toward Brexit in March 2019. If Germany doesn’t look for special advantages in those negotiations, the other member states will also be more constrained. And if she argues for the United Kingdom to have a special relationship with the EU in security and defense policy, others will support negotiations in that direction.

At a time when Italy faces a long period of government instability, and other EU members also face political challenges, having strong pro-EU leaders in Germany and France will be invaluable.

Finally, following the May 2019 European Parliament elections, Europe will face critical choices in selecting the next set of European leaders, including the presidents of the European Council and the European Commission.  Merkel and Germany will be heavyweights in those negotiations, which will do much to set the course for the EU’s next decade.  Perhaps even more than in Germany, Europe is where Merkel will have the most impact and the greatest legacy.

Merkel is also now a global figure.  She has chaired the G7 twice and the G20 and is now on her third US president.  With the United States not exercising its usual leadership in support of multilateral institutions and international rule of law, Merkel’s outspoken support for that system will be crucial, as will be her ability to work with others, from Europe and elsewhere, who share that commitment.

As for the transatlantic partnership, there are few indications that she will share the same close and respectful relationship with US President Donald J. Trump that she had with George W. Bush and Barack Obama.  Nevertheless, she undoubtedly will remain firm in her support of the transatlantic relationship more generally, and the US-German partnership in particular. Her refusal to fan the flames of anti-Americanism growing in Europe will help maintain ties with the United States despite the strains of potential steel tariffs and disagreements over Iran and climate change.

Angela Merkel has always been an underrated politician—a woman from the East who succeeded in a very traditional political system. Indeed, one of her great legacies will be the number of women in German politics today. Although she is seen now as relatively weak, the next few years give her another opportunity to show what she can do: to make Germany a more diverse but tolerant society; to lead Europe past its differences to a stronger, more unified position that respects the member states; and to help safeguard the international system that has been so beneficial to Germany and Europe over the past decades. We should wish her well.