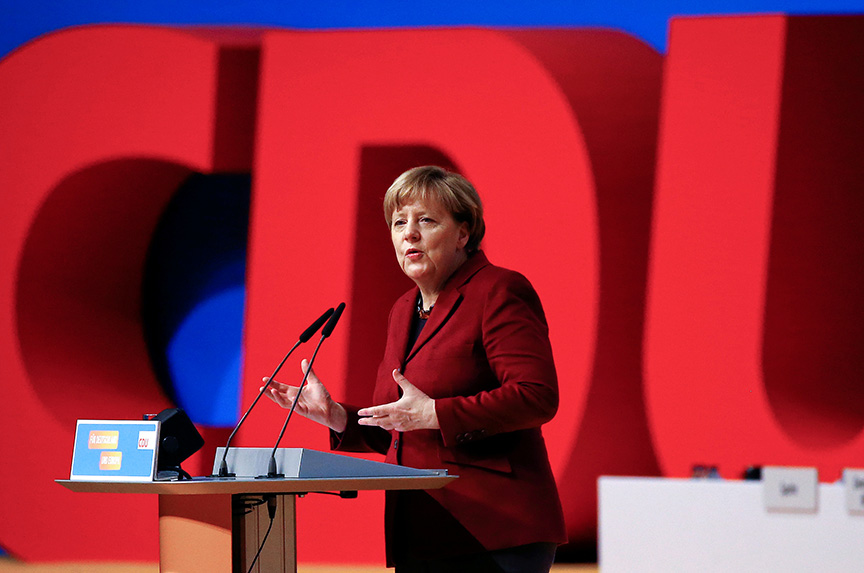 German chancellor to step down from party leadership in December, give up chancellorship in 2021

Germany’s Angela Merkel, viewed by many as a staunch defender of the liberal world order and a bulwark against the rising tide of populism in Europe, has decided to step down as leader of the center-right Christian Democratic Union (CDU) party in December and not run again for the chancellorship in 2021. Merkel, who dominated European politics for the past thirteen years, has been chairwoman since 2000 and chancellor since 2005.

“I will not be seeking any political post after my term ends,” Merkel told a news conference in Berlin on October 29.

Merkel’s decision follows setbacks for her party in regional elections in Hesse and Bavaria. In the election in Hesse on October 28, the CDU won 27 percent of the vote, down from 38.3 percent in the last election in 2013. The far-right Alternative for Germany (AfD), meanwhile, more than tripled its 2013 result to 13.1 percent.

The result, Merkel said, was a “clear signal that things can’t go on as they are.”

Traditionally, the leader of the government’s largest party serves as chancellor. While this is not a binding rule, it is one that Merkel has endorsed in the past.

In February 2004, Merkel’s predecessor, Gerhard Schröder, gave up the position of chairman of the Social Democrat Party (SPD) but remained chancellor until November 2005. Merkel, at that time the leader of the opposition, described this as “the beginning of the end” of Schröder.

Is this the beginning of the end for Merkel? Fran Burwell, a distinguished fellow in the Atlantic Council’s Future Europe Initiative, discussed developments in Germany in an interview with the New Atlanticist’s Ashish Kumar Sen. Here are excerpts from our interview.

Q: Angela Merkel’s decision to step down as party leader, but remain chancellor, flies in the face of her belief that party leadership is key to an effective chancellorship. What do you make of her decision?

Burwell: I think she has run into reality. She has been perhaps not the best in terms of grooming a successor. A key question will be, who is the next leader of the party? I will not be surprised to see that person be the successor to Merkel at least in terms of the party’s candidate for chancellor in 2021.

For the moment, Merkel needs a way to finish a term she has started, which she clearly wants to do. She also needs to groom a successor that she can trust. That’s not an easy thing for her to do.

While one should never underestimate Merkel, it may be time to start thinking about her political obituary.

Q: What is that legacy?

Burwell: Merkel has really been a transformational leader for Germany. She has shifted Germany in terms of its defense policy. We complain in the United States about defense spending in Germany, but the fact that Germany shipped arms to the Kurds who are fighting ISIS [in Syria] is just remarkable. Without Merkel that would not have happened.

Merkel has also been the toughest leader in Europe on Russia. She has kept the coalition together on sanctions related to [Russia’s annexation of] Crimea and [Russia’s support for separatists in] Ukraine.  She helped guide Europe through a financial crisis. There are plenty who will complain about Germany’s role, but Merkel made it much less strict than it could have been if you listen to some of her country colleagues. And even on migration—which has proven to be her downfall—it was a rare moment when you saw Angela Merkel speak about something that she clearly felt from the heart, about there being no walls and about being welcoming to people who like her had been on the other side of walls in the past.

Q: Do you expect her to serve out her term as chancellor?

Merkel is a political animal who will be watching what the opportunities are, if she wants those opportunities, and whether she can get them. Sometimes when you have been in a position of unquestioned power and things start to erode, they go faster than you think they are going to.

Q: What impact do you expect on the governing coalition? Will the SPD remain in the coalition?

Burwell: It is very unclear at the moment. Aside from the impact of this decision on her own personal career, the elections in Hesse and Bavaria put into the question the SPD’s survival as a party that can meet the electoral threshold and get through to parliament.

These two elections have shifted the political landscape in Germany, so I will not be surprised to see in a couple of weeks a restart of government negotiations. If that happens, it may mean that Merkel will leave a lot faster than she had anticipated.

Q: What are the factors that resulted in setbacks for the CDU in Bavaria and Hesse?

Burwell: Interestingly, the CSU [Christian Social Union], Merkel’s partner party, seems to have been defeated primarily because it opposed her on migration and some other issues. Those in the CSU who had been very outspoken against her policies were the ones who were seen as dragging their party down and taking it too far to the right without capturing the votes that the AfD already had. It is not clear that the CSU moving to the right was the correct and winning strategy.

While migration is an issue on which Merkel has foundered, I think the real reason for this change is that German political parties need to be renovated. The party system is not working for the German people. In fact, we see this across Europe. I would also argue that we see it in the United States. The traditional parties of the left that guaranteed a working class prosperity are no longer able to do that. So you have this weird mix where people vote either for the far left or the far right. The middle parties are seen as exhausted; many of them have had the same leadership for quite some time.

The one country in Europe where you see a renovation is France. What [French President Emmanuel] Macron was able to do in political terms was amazing and outstanding. In part he was able to do it because the system was so broken. Maybe there is a Macron in Germany; I haven’t seen that person yet. The Green Party is certainly seeing a resurgence in a way that I don’t think any of us anticipated. That is partly the voters saying, “We’re tired of the old gang.”

Q: Who are the top contenders for Merkel’s job?

Burwell: It is not a long list. Annegret Kramp-Karrenbauer, often referred to as AKK, [who is serving as general secretary of the CDU] is a real possibility. I also think [German health minister] Jens Spahn has a shot. One lesson that the CDU may take, which I think is the wrong lesson, is to move to the right. In that case Jens Spahn is the right candidate, but I don’t think that’s going to help them. Norbert Röttgen [the chairman of the foreign affairs committee in the German parliament] would also probably like to be considered for the job.

Q: Are the CDU’s political fortunes expected to pick up without Merkel at its helm?

Burwell: Not initially. Until it is clear that there really is new leadership and people are clear that that’s the case they will be a little bit hesitant to come back to the CDU. If there is a caretaker chancellor that, too, is bad news for the party.

Q: The German government has been accused by critics of navel gazing that has resulted in political paralysis for much of the past six months. Does Merkel’s decision provide an opportunity to Germany for a fresh start?

Burwell: Not by itself it doesn’t. Immediately nothing is going to change. What I fear is that the coalition, because of the elections in Hesse and Bavaria, will fall apart and someone will have to try and put it back together. That will take a long time. So you will have more navel gazing, more trying to figure out whether Merkel will survive through another coalition, who will be in the coalition, what will their demands be? That introspection could go on for a while.

I am not expecting that Germany will suddenly decide that just because Merkel is no longer going to be party leader and will not be chancellor in three years that things are moving forward now.

Q: Merkel has been described as a defender of the liberal order in Europe and a bulwark against the rising tide of populism. What does her decline mean for Europe and, particularly, French President Emmanuel Macron’s role on the Continent?

Burwell: These defeats in the elections [in Hesse and Bavaria] show how broken the old system is. I don’t really think people are turning to populism because they disagree with the values of the liberal international order. But there is a group of people that doesn’t feel that globalism works for them. Somehow, we have to bring them in so it does work for them. That is the job of the next generation of political leaders both in the United States and in Europe.

It is time for a reinvention of politics. Macron succeeded, in part, because he had a very positive argument on the European Union. So, it is possible to make that argument, but it takes political courage and that has not always been around.

The big question for those who are the defenders of the liberal international order is: do they have the courage to make a positive argument?

We will just have to see who Merkel’s successor is in the party leadership. That will be a big indicator of which way the party is going to go. It will also be worth watching how other leaders in Europe react.

Q: What are the implications for the transatlantic relationship?

Burwell: Given the rather tense relationship that [US] President [Donald J.] Trump has with Merkel and Germany, generally, the immediate impact will not be great. What I worry about a lot more is that there are those on both sides who are much more dismissive of the relationship—like President Trump and a number of people in his administration. That attitude on the part of the United States makes it hard for anyone in Germany to run for office speaking positively about the transatlantic partnership.

At a key time when new politicians are emerging in Germany, we are putting steel tariffs and possibly car tariffs on them. That is going to be a challenge in the relationship after German politics settle down.

Image: German Chancellor Angela Merkel on October 29 announced her decision to step down as leader of the center-right Christian Democratic Union (CDU) party in December. She also said she will not seek re-election as chancellor in 2021. (Reuters/Kai Pfaffenbach)