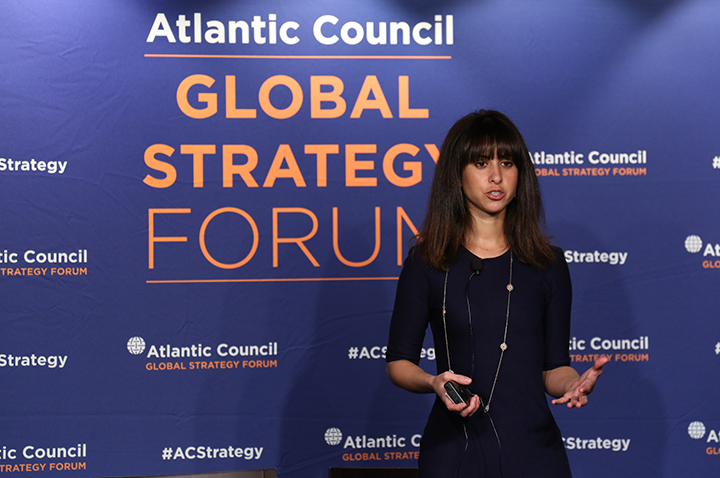 The political climate in the United States today is fueled by a voter base that feeds off of antagonistic behavior, misinformation, and isolation from global politics, panelists said in a discussion at the Atlantic Council on May 2.

“This is the problem that we are facing today: The American voter has been so insulated and isolated that fifty percent of them are now ready to elect a reality TV star,” Max Brooks, a Nonresident Senior Fellow with the Art of the Future project of the Council’s Brent Scowcroft Center on International Security, said referring to Republican presidential frontrunner and New York billionaire Donald Trump.

“The issue that we are dealing with right now trickles down to every level of government and every level of the [US] military. It all comes back to: ‘We don’t want to upset or bother the American people.’ And yet, we must,” Brooks contended.

Jasmine El-Gamal, a documentary filmmaker, noted the deep political divisions in the United States. “Our election cycle has been defined by anger and discontent and frustration and in some cases even hatred and outright racism. This greatly affects our ability and our willingness to lead,” she said.

Brooks and El-Gamal spoke at the Council’s Global Strategy Forum, a two-day conference that focused on national security and the US foreign policy discourse.

“The American voter has been so insulated and isolated that fifty percent of them are now ready to elect a reality TV star,” said Max Brooks, a Nonresident Senior Fellow with the Art of the Future project of the Atlantic Council’s Brent Scowcroft Center on International Security. (ImageLinkPhoto.com-Dennis Kan)

The race for the White House has been mired in antagonism and animosity—especially between Republican Party candidates Trump and Sen. Ted Cruz of Texas. Cruz suspended his campaign following Trump’s victory in the Indiana primary on May 3. The third remaining Republican candidate, Ohio Gov. John Kasich, followed suit on May 4.

Among the Democrats, national polls have reported the gap between candidates Hillary Rodham Clinton and Sen. Bernie Sanders of Vermont has been steadily closing.

El-Gamal agreed with Brooks that the future of the United States’ leadership with its allies and in dealing with today’s critical international crises greatly depends on an educated public and informed voter base.

“We do not have the luxury to sit on the sidelines right now and allow our country’s story to be told and our identity to be defined by someone else. We have to do it ourselves,” said El-Gamal.

An estimated 57.5 percent of eligible voters turned out to vote in the 2012 national presidential election, about 5 percent less than the 2008 election.

Meanwhile, as Europe faces a migrant crisis—the largest movement of people into the continent since World War II—fueled by protracted conflicts in Iraq, Afghanistan, and Syria; Russia continues to support separatist movements in eastern Ukraine; and the Syrian war—now in its sixth year—continually eludes attempts at peace, the United States’ foreign policy strategy has taken center stage on the political campaign trail.

Brooks and El-Gamal offered clear prescriptions on what individuals, the media, and policy makers need to do in today’s national campaign climate.

“We have never had the power that we have today to speak and use our own voices. We do not need anyone’s permission. We have our phones, we have Facebook, we have Twitter…with that ability comes a huge responsibility to have these conversations with honesty and respect,” said El-Gamal.

Brooks said: “Instead of just staying in the cocoon of the thinking class, we need to reach out to genuine mouthpieces…you don’t need to take a side on the issues, for or against, but I do believe very strongly that people in this country who have a platform have moral obligations as citizens to at least acknowledge the issues around them.”

“We need to reengage the American people. We need to let them know what is going on around them and give them the tools so they can make their own decision at the ballot box,” he added.

However, El-Gamal noted that there is no silver-bullet for resolving the varied challenges surrounding the discourse of national sentiment in the United States. “Leadership alone is not enough and civic participation alone is not enough. You need to meet in the middle. Those are both necessary elements of a strong and resilient society,” she said.

“The way to deal with these challenges is to just talk and communicate. It sounds simple but it is not. We often do not know how to talk to each other,” she said.

“You can choose politicians who will help heal our country and tell a story different than the one we are seeing right now on some campaign trails,” she added.

Image: “Our election cycle has been defined by anger and discontent and frustration and in some cases even hatred and outright racism,” Jasmine El-Gamal, a documentary filmmaker, said at the Atlantic Council’s Global Strategy Forum in Washington on May 2. (ImageLinkPhoto.com-Dennis Kan)