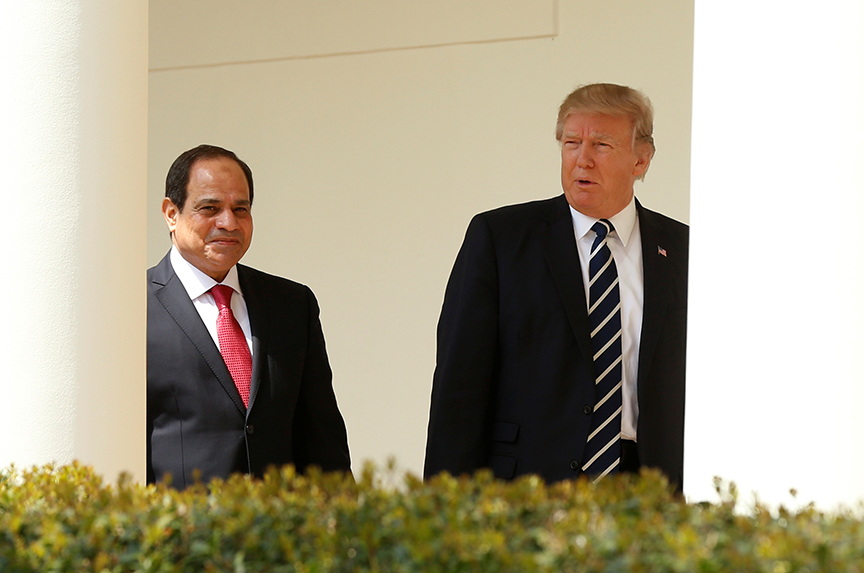 Eager to unlock the door to US-Arab cooperation on tackling regional issues following decades of disappointment with Washington’s lack of understanding of their concerns, three Arab leaders are engaging US President Donald Trump’s new administration over the next month.

Egyptian President Abdel Fattah el-Sisi met Trump at the White House on April 3; Jordan’s King Abdullah II will be in Washington on April 5; and Palestinian Authority President Mahmoud Abbas is expected to follow later this month or in May. In their meetings, these leaders hope to discuss a number of issues, including the Israeli-Palestinian crisis, the civil war in Libya, and the threat posed by global terrorist organizations.

In their meeting on April 3, Trump and Sisi discussed holding an Israeli-Palestinian peace conference in the United States in June and renewing joint military exercises, which former US President Barack Obama halted in response to the Egyptian military government’s bloody crackdown on protesters in 2013. The Egyptian leader, a former chief of the armed forces, sought logistical support from the United States for the Egyptian army in its fight against terrorism in the Sinai. Sisi would like Trump to focus more on ending the six-year-old civil war in Egypt’s western neighbor—Libya. The two leaders also discussed regional issues, including Syria, Yemen, and Iraq.

Abdullah, who hosted the Arab League Summit in Amman on March 29, is eager to solve a number of regional conflicts. Jordan is an important player in US-led military campaigns against al-Qaeda and the Islamic State of Iraq and al-Sham (ISIS). Abdullah will discuss with Trump the position of Arab leaders on the Israeli-Palestinian crisis—at the summit in Amman Arab leaders reiterated their support for an independent Palestinian state with Jerusalem as its capital, and opposed the construction of more settlements.

Jordan has played an active role in Arab efforts to end the stalemate in talks between the Palestinians and the Israelis. The king himself has advocated for Palestinian national aspirations. On his previous visit to Washington in February, Abdullah sought to persuade the new US administration to reverse itsrhetoric about moving its embassy from Tel Aviv to Jerusalem, and to call for a freeze of settlement construction in the West Bank. In his meeting with Trump, Abdullah will likely reiterate Arab support fora two-state solution. Thus, this time, the royal visit aims to make Trump more sympathetic toward the Arab perspective on the Palestinian issue.

On his visit to Washington, Abbas is expected to ask Trump to seriously consider a solution to the Israeli-Palestinian crisis and will reiterate the Arab position that a two-state solution is impossible without East Jerusalem as the capital of Palestine. In his meeting with Trump, Abbas will likely argue that if there is no Palestinian state, no one in the Middle East, including Israelis, will enjoy the benefits of peace. Denying the Palestinians their right to statehood will only lead to a rise in the level of terrorism and extremism.

The Palestinian foreign ministry said in a statement that on the sidelines of last month’s Arab League Summit, Abbas, Abdullah, and Sisi coordinated their positions on a number of regional issues and decided what they would discuss when they visit the White House.

These visits to Washington come at time when the greater Middle East is beset by numerous wars and political crises. Restarting Israeli-Palestinian peace talks based on the Arab Peace Initiative adopted at the Beirut Arab Summit in 2002, which calls for “land for peace,” is a high priority for the Egyptian and Jordanian governments, as well as the Palestinian people.

The Oslo Accords initiated a period of peace between Israel and the Palestinians, delayed permanent status talks on Jerusalem, and paved the way for the creation of an independent Palestinian state. Two decades later, however, the Israeli-Palestinian conflict remains unresolved and there is still no sovereign and independent Palestinian state. Obama—who believed that a multilateral effort, and not a single power, would be able to help reach a final settlement—was unable to resolve the crisis.

The Arab leaders want international powers to resolve the Israeli-Palestinian crisis because they believe that if a peace agreement is reached it will resonate positively throughout the region and the world.

One positive outcome of the Amman summit was that it put the Israeli-Palestinian conflict, overlooked for many years due to other conflicts and threats of extremism in the Middle East, back in the spotlight. In their final statement, Arab League Secretary General Ahmad Aboul Gheit reaffirmed a “commitment to the two-state solution and to the right of the State of Palestine to restore its sovereignty over the territories occupied in 1967, including East Jerusalem.”

Will the Trump administration ask Israelis and Palestinians to prepare for talks in the near future? Will Jordan be in charge of liaising between regional actors and the United States in coordination with the United Nations (UN) and the Arab League? Will the forty-fifth US president become more sympathetic to Egypt’s agendas in Libya and in the Sinai? The answers to these questions remain to be seen.

What is known is that Abdullah, Sisi, and Abbas will do their best to convince Trump to begin taking more seriouslytheir ideas to resolve crises that threaten the security of Americans and Arabs alike.

For decades, Arabs have been justifiably disappointed with Washington’s stance on issues in the Middle East. The Jordanian, Egyptian, and Palestinianleaders are hoping to convince Trump to shift course and take Arab interests and concerns into account more than his predecessor did. If Washington fails to help the Arab world resolve its conflicts, there will be tectonic shifts toward radicalism, endangering governments in the region and opening the gate to even more chaos.

Shehab al-Makahleh (Sam Mak) is a senior advisor at Gulf State Analytics with experience as a political advisor in the United Arab Emirates.