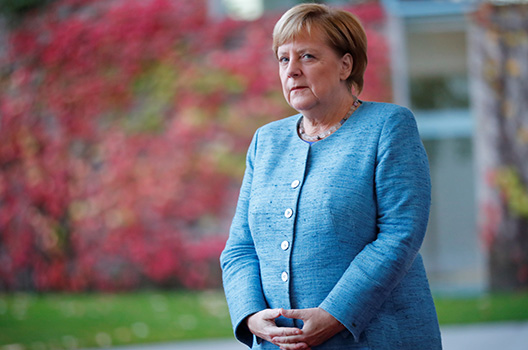 German Chancellor Angela Merkel awaits the arrival of participants ahead of the 'G20 Compact with Africa' summit at the Chancellery in Berlin, Germany, October 30, 2018. (REUTERS/Hannibal Hanschke)

Angela Merkel announced on October 30 that she would not seek re-election as leader of the Christian Democratic Union (CDU) when the party hosts its annual convention in Hamburg in December. She also declared that this would be her last term as chancellor, as she will not stand for reelection to the Bundestag or any other political office. The announcement is surprising for several reasons, not least because of Merkel’s fundamental belief, inherited from her time in Helmut Kohl’s cabinet, that the chancellorship and head of the party should go hand in hand.

Merkel’s announcement follows an electoral setback for the CDU in the German state of Hesse on October 28. The party experienced its worst result in the state since the 1960s, decreasing its vote share by 11.3 percent.

The Hesse election is the most recent symptom of the CDU’s recent decline. Earlier in October, the CDU’s sister party, the Christian Social Union (CSU), suffered heavy losses in the state election in Bavaria. Most recent polls have the CDU/CSU hovering at around 25 percent nationally, well below its 2017 election result of 33 percent, and a far cry from Merkel’s 2013 record of 41.5 percent.

The future of the ‘Grand Coalition’, comprised of the center-right CDU/CSU and center-left Social Democrats (SPD) is in flux given the steady decline of both big tent parties. Together, the parties are currently polling well short of the 50+ percent they had after Germany’s 2017 federal elections. The SPD entered a second consecutive grand coalition somewhat unwillingly – it faced strong opposition from within its own ranks, notably from the party’s youth wing and rising star in the party Kevin Kühnert. These sentiments have only grown stronger since then and Kühnert has led the intra-party opposition to the grand coalition.

If the SPD were to leave the grand coalition, it would open the door to a few potential scenarios. The first would be the formation of a new coalition. This would come down largely to the willingness of the Greens and the classic liberal Free Democratic Party (FDP) to hold a second round of talks for a so-called ‘Jamaica’ coalition.

It is unclear whether Christian Linder, the leader of the FDP, would be ready to return to the negotiating table after leaving the CDU/CSU and the Greens high and dry following the 2017 federal election. Linder’s willingness is highly dependent on Merkel’s successor and the course of the CDU/CSU. But more importantly, his FDP’s relationship with the Greens was left in tatters after the first coalition talks and have hardly improved since.

It is unlikely the Greens, riding a wave of recent successes, would be willing to come to terms with the CDU/CSU and enter government. While arithmetically it could work, the prospect of joining the CDU/CSU as a junior coalition partner is not without great risk, as evidenced by the recent decline of the SPD.

The other two parties in the Bundestag, the populist far right Alternative für Deutschland and the far left Die Linke, are not potential partners for the CDU/CSU.

New elections would be another possibility. However, the CDU/CSU and SPD – or at least their leaderships – will do their best to avoid going to the ballot box any time soon. Low in the polls and low on cash, new elections would mean electoral suicide for the Social Democrats and could also hit the Christian Democrats hard during an unresolved leadership transition.

The leadership contest in the CDU will also be a fight over the future direction and political strategy of the Christian Democrats. It will pitch resurgent conservatives who argue Merkel’s centrist course and lack of adherence to core conservative positions is to blame for the party’s malaise and Merkel allies who see the party’s future in a more modern force of “the middle.” Frontrunners are likely to include the following:

Annegret Kramp-Karrenbauer or AKK as she is more popularly known, is the current general secretary of the CDU. She served as the minister president of the German state of Saarland from 2011 to 2018 and has been labeled a “mini-Merkel.” Widely considered a centrist force within the party (though she does espouse socially conservative positions, such as opposing gay marriage and abortion), her leadership and profile could be viewed by some critics as a too similar to that of Merkel, and a mere continuation of the party’s current course.

Jens Spahn is the current minister of health and, though only 38, a seasoned politician in his own right. He was elected to the Bundestag at age 22 in 2002. Spahn, who is openly gay and a practicing Roman Catholic, would represent a turn toward a more hardline position for the CDU. A proponent of German leitkultur (guiding culture), Spahn favors a burqa ban and greater law and order measures. He has opposed dual citizenship and economic concessions to the SPD as part of the grand coalition agreements. He was also a harsh critic of Merkel’s “open door” policy during the refugee crisis. His opposition to a more lenient fiscal policy in Europe would also make discussion on EU and eurozone reform more difficult.

Friedrich Merz was the chairman of the CDU/CSU parliamentary group from 2000-2002 and a member of the Bundestag from 1994 to 2009. He is a former political rival of Merkel’s, one of the many she cast aside on her way to the top. Since leaving politics, he has had an illustrious career in the private sector. He is also reportedly the favorite of party stalwart Wolfgang Schäuble.

Like Spahn, Merz is a critic of Merkel. He blames her for the demise of Germany’s democracy. An economic liberal with significant business clout, Merz has connections in the boardroom and with FDP boss Christian Lindner. However, it is unclear how he would connect with voters in some of the areas the CDU has suffered most. In many ways, he embodies the Berlin-Munich-Hamburg boardroom elite that is the source of many AfD voters’ ire.

Armin Laschet is the current minister president of Germany’s most populous state, North Rhine Westphalia. Last year Laschet led a successful election campaign by the CDU in the state, which historically has been the stronghold of the Social Democrats. Laschet is the quintessential pragmatic moderate in the party. He is a strong advocate for the CDU’s center position. Like Merz, his ability to potentially work with FDP chief Christian Linder could give him a boost.

A decision to make

When the CDU elects a new chairman —or woman— it will be deciding the future direction of the party. Electing AKK or Laschet would mean staying on course. Turning to Spahn or Merz would mean a rightward turn, not only on socio-cultural issues, which have dominated the German political landscape of late, but on socio-economic issues as well.

Neither option is guaranteed to bring renewed success to the party. The German political landscape is shifting. We could be witnessing not only the end of Merkel, but the end of the era of ‘catch-all-party’ dominance in German politics.

No matter who succeeds Merkel as leader of the CDU, it is difficult to imagine that person would be content with Merkel staying on as chancellor until her terms ends in 2021. That person will want the opportunity to connect with voters and chart his or her own course for the party. One of Merkel’s many strengths as a politician has been her ability to campaign. Therefore it is vital that the next leader of the party gain her approval.

We are witnessing an end of an era. Merkel has not only been the leader of Germany for the past thirteen years, but in many ways the de facto leader of Europe. Whatever happens in Germany going forward, its effect will be felt in Europe and beyond.