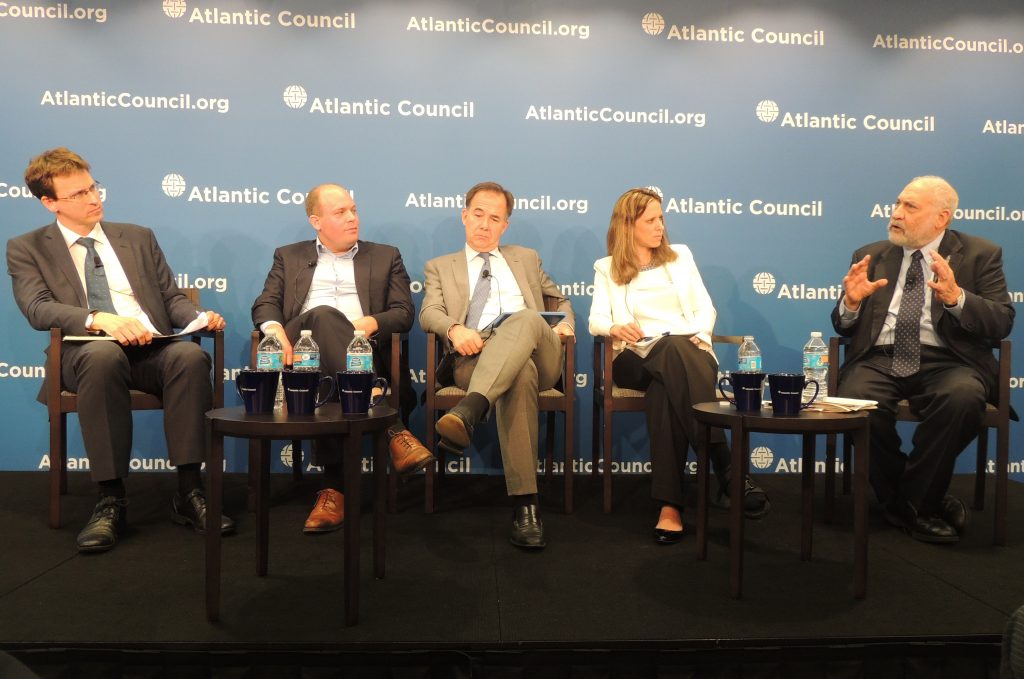 As countries such as Argentina, Greece, and Ukraine struggle to pay down their debt, it is “clear that sovereign debt issues are important today, but they’ll be even more important tomorrow,” says the Atlantic Council’s Andrea Montanino.

“The question on the minds of many is whether we will see another Greek default and what [will be its] potential consequences on the stability of the international financial markets, the euro, and Europe,” said Montanino, Director of the Atlantic Council’s Global Business and Economics Program.

Greece is not the only country in the news, he noted.

“Ukraine is currently negotiating its debt restructuring with the IMF. Failure to get an agreement with creditors could put the program off track,” said Montanino, a former Executive Director of the International Monetary Fund. “And of course, Argentina and its long, difficult legal situation with its creditors has been in the headlines for many months.”

Montanino spoke May 12 at a discussion on sovereign debt restructuring hosted by the Atlantic Council’s Adrienne Arsht Latin America Center and the Global Business and Economics Program. A day earlier, European Finance Ministers met in Brussels with IMF and European Central Bank officials to resolve the looming Greek debt crisis.

“Back in the 19th century, people used to send gunboats to enforce sovereign debt crises. Today, they’re more likely to send lawyers and district court judges,” Fleming said. “But the process hasn’t changed in one way: it tends to be extremely messy and incredibly contentious.”

In September 2014, US District Court Judge Thomas Griesa declared the Argentine government in contempt for trying to evade a prior ruling that it must pay $1.3 billion to creditors who rejected the country’s debt restructuring agreements in 2005 and 2010.

Argentina defaulted on over $100 billion in debt more than a decade ago.

“His decision made it almost impossible to get a fresh start,” he said. “A resolution was introduced into the United Nations to create an international rule of law in this area, to start a process of discussion. It’s gotten almost unanimous support from emerging markets and developing countries, and perhaps not surprisingly, opposition from the United States.”

According to a report by McKinsey & Co., total debt worldwide since the start of the global financial crisis in late 2007 has risen by $57 trillion, or 286 percent of world economic output. But the issue goes back much further than the last financial meltdown.

“Back in 1997, the World Bank and the IMF were telling countries all over the world they ought to have a bankruptcy law,” Stiglitz said. “We don’t have a rule for dealing with the question of what happens when a country owes more money than it can pay.”

Several factors have converged to make things much worse than they used to be, he said.

“We’ve moved from banks as lenders to securities. Back during the Latin America crisis, in 1980, you could put a few people in a room, hammer it out and with a little bit of arm-twisting by a few governments, the banks went along,” he said. “Today, you couldn’t have a room big enough for all the creditors.”

A second factor, Stiglitz said, is the growth of credit default swaps, or CDSs, in which the bondholders may have no economic interest in the outcome. In fact, he said, “they may actually have an interest in not having a settlement because they may get paid more.”

Hagan noted that fourteen years ago a key international debate took place over whether the world needed a more structured, orderly framework for restructuring debt.

“The fund took this debate seriously, and proposed a statutory framework that was very loosely based on Chapter 11, but essentially involved an amendment to the IMF articles that would enable a majority of creditors to make decisions binding on all creditors,” he said. “It was discussed extensively, but in the end, not just the US but a number of emerging markets did not support it as well, because of concern it would increase the cost of credit.”

One possible solution, said Hagan, is the inclusion of collective action clauses that would bind all creditors in any deal reached by the majority. The problem is that such clauses only apply in future contracts, not existing ones. Hagan said his IMF team has been working on “coming up with clauses that aggregate the voting across all instruments.”

Even so, the notion of collective action takes a back seat to the process itself, he said.

“Debt restructurings are messy, and they will always be messy,” said Petermann. “It’s like a divorce. You can make the nicest framework around it but it’s still going to be messy.”

Even so, he said he finds it “puzzling” that any country—whether Argentina, Greece, or Ukraine—would give up its sovereignty to bind itself to an IMF or World Bank agreement not supported by the majority of its citizens.

“At its darkest hour, you want to do what’s best for your country,” Petermann said. “If I were in government, that’s exactly the moment I’d want to be in control of my own destiny, and not hand it off to three or four people who might not have even set foot in my country, don’t understand its dynamics, people or mentality, and will just look at a blind set of documents. You take away the influence you have in structuring your future.”

This is why Nahón, Argentina’s Ambassador to the United States, said the inclusion of what she called “vulture-proof clauses” is so important, because all creditors must respect any deal eventually negotiated with creditors.

“That’s exactly what Argentina did,” she said, referring to the widely publicized case recently ruled on by Griesa. “In fact, we reached an agreement with 92.4 percent of our creditors, but a small minority decided to hold out and not accept the deal, and tried to sabotage the restructuring.”

On May 11—the day before the Atlantic Council panel—NML Capital, Aurelius Capital, and Blue Angel asked Griesa to make Argentine government bonds issued in April subject to the judge’s first ruling ordering Buenos Aires to pay hedge funds in full.

“This is not just an issue about Argentina,” Nahón said. “The fact is, a global discussion now going on relating to changing sovereign debt clearly shows that predatory behavior is an issue of concern for countries around the world. We’re talking about a global problem, and there certainly needs to be a global solution.”

Image: From left: Sam Fleming, US Economics Editor at the Financial Times, moderates a discussion May 12 on “Lessons from Sovereign Debt Restructuring” with Maarten Petermann, Managing Director and Head of the Special Situations Group for Europe, Middle East, and Africa at JPMorgan Chase & Co.; Sean Hagan, General Counsel and Director of the Legal Department at the International Monetary Fund; Cecilia Nahón, Argentina’s Ambassador to the United States; and Joseph Stiglitz, University Professor at Columbia University and Nobel Prize-winning economist.