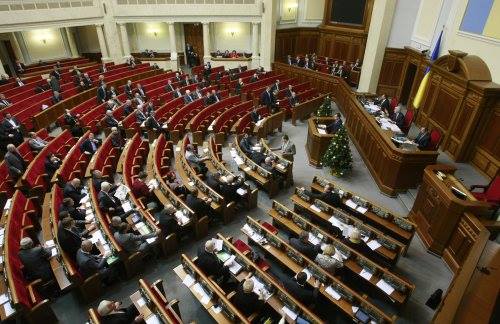 Ukraine’s election of a new president on May 25 was an essential first step in building a Ukrainian government with enough democratic legitimacy to lead the country through the crises it faces.  But establishing a government with a strong enough mandate to make painful economic reforms and resist Russia’s assault on Ukraine’s independence also will require a new parliament.

The Verkhovna Rada (literally, the “Supreme Council”), Ukraine’s unicameral, 450-seat legislature, has made headlines more often for its brawls (see the AP news video below) than for its lawmaking. Its delegates have thrown eggs and smoke bombs at each other during sessions beneath the high, carved-plaster ceiling of its dignified, neo-classical chamber.

The current parliament was chosen in a 2012 election that international monitoring groups such as Organization for Cooperation and Security in Europe (OSCE) criticized for what they said was a bias in favor of the Party of Regions, the political vehicle of then-President Viktor Yanukovych. Yanukovych achieved a working majority in the election by using government resources and the TV stations and money of allied business magnates, or oligarchs, to skew the vote, the OSCE mission and other observers said. His government also jailed his main opponent, former Prime Minister Yulia Tymoshenko, on corruption charges.

The Party of Regions fell short of an outright majority in the voting, but assembled a super-majority by inducing delegates from other groups to join it, a process that opposition legislators of the Batkivschyna party said included bribes.

The current parliament has frequently abandoned its own rules, said Kyiv writer and analyst Serhiy Hrabowsky. “They’ve pushed through legislation without any discussion, they have ignored elementary parliamentary principles and today they neither represent national interests nor the mood of our society,” he said in a phone interview. “They need to go.”

President-elect Petro Poroshenko spoke in similar terms this week: “We are living in a new country, we can no longer ignore what the people want and 85 percent of the people want this parliament to be disbanded.” In September 2013 and February this year, polls by the International Republican Institute found 80 percent of Ukrainians surveyed disapproved of the parliament’s performance.

When months of street demonstrations threatened Yanukovych’s rule, and when his government was doomed by the refusal of the army to suppress dissent, Yanukovych fled Kyiv, and his party’s legislators quickly abandoned him. Rada Speaker Oleksander Turchynov replaced him and the Rada heavily backed Arseniy Yatsenyuk to form an interim government (giving him 371 votes well beyond the 226 required).

For all of the nationwide contempt now directed at the Rada, the incoming President Poroshenko may be unable to find a constitutional means of dissolving the assembly to make way for new elections. Given the Russian-backed secessionist uprising in southeast Ukraine, among other challenges, Poroshenko will have to find a process toward elections that will be seen as politically legitimate.

Existing law lets Ukraine’s president dissolve parliament if it fails either to meet or to form a governing majority within a month. The Rada is unlikely to voluntarily give him that opportunity, notably because many of its members can be expected to fear possible criminal investigations or prosecutions for corruption once they lose the parliamentary immunity of their current offices. Others, who have openly supported the armed separatists in southeast Ukraine might face charges of treason.

The way forward may be a re-write of the constitution, according to Andriy Yermolayev, director of Ukraine’s National Institute of Strategic Studies. Ukraine’s entire political system needs an overhaul, and that thoroughgoing change is what the Maidan pro-democracy movement has been demanding.

A Constitutional Assembly, formed heavily of legal scholars, was established under Yanukovych in 2012. It is headed by former President Leonid Kravchuk, and has not yet produced a draft for a new charter. Yermolayev expressed hope that a drafting process could lead to a referendum on a new constitution by autumn, and then to new parliamentary elections by the end of this year.

Parliamentary elections are organized under a law separate from the constitution. Currently, half the parliament is elected on the basis of party lists and half in single-member districts. Ukraine needs to change to a system of electing the parliament through open party lists, said Kost’ Matvienko of the Hardaryk Center, a Kyiv-based think tank. Ukrainian politicians on their own “will never get this law through,” Matvienko said. “That’s why society must pressure them constantly, even if they have to organize a new Maidan.”