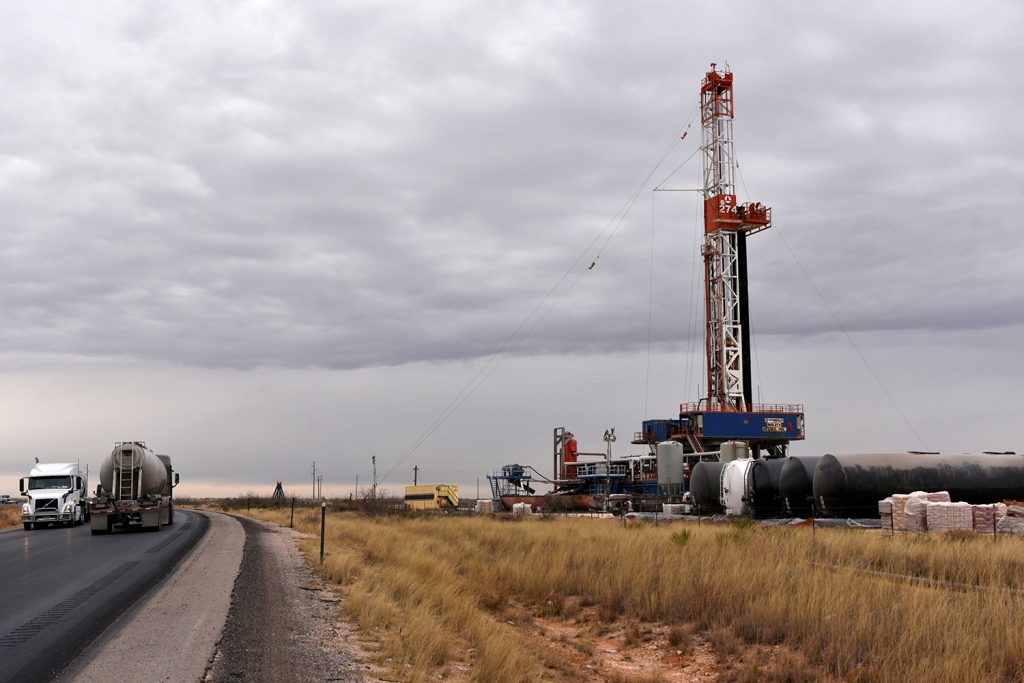 Just one week after a historic production cut by the Organization of the Petroleum Exporting Countries Plus group (OPEC+), West Texas Intermediate (WTI) prices, the benchmark for crude oil produced in the United States, have crumbled to equally-historic levels—reaching as low as minus $40.32 per barrel on April 20, the first time prices have fallen below zero. As the market digests the final surge of oil from a Saudi-Russian price war prior to the implementation of production cuts on May 1, it may be that the tail end of a brutal supply glut has arrived and corresponding price stabilization—albeit at a very low price—will be soon to follow. But with oil demand projections reaching multi-decade lows, and US inventories continuing to build by record levels, the madness on April 20 suggests that US markets are far from out of the woods, putting policymakers and regulators in a tough position.

Most of the April 20 price plunge has its origins in oil contracts for May delivery, which have lost considerable value as the actual physical barrel of oil underpinning each contract runs out of places to go against a still-bleak oil consumption picture and prolonged storage crisis. The resulting sell-off into negative price territory is what rocked the market to a record decline from $18.27 on April 17 to minus $37.63 by closing on April 20.

Prices should rebound in anticipation of production cuts beginning to bite next month and hope for a boost to consumption from early economic re-opening. Reaction to reported messaging from Saudi Arabia that the Kingdom will cut output prior to May 1 will also boost market sentiment. Yet the sudden price lurch as crude contracts came due with nowhere to put the oil reinforces a problem that will persist possibly well into the summer: even despite cuts to production from OPEC+, and “organic declines” from the United States and fellow Group of Twenty (G20) nations, lack of available storage will be a problem each time futures contracts come due until inventories begin to clear.

The problem is that producers who are either price-hedged or for whom a shut-in could potentially be more expensive than producing at a loss are continuing to produce, doing little to alleviate the storage crisis in Cushing—where oil purchased on WTI prices is delivered—in the short term and even less to support WTI prices. As of last week, storage at Cushing was at 61 million out of a roughly 76 million barrel capacity (with traders noting that it would be completely full in two weeks). When May contracts were ready for delivery, storage was at such a premium that prices went negative. As markets opened on April 21, forward-month contracts for June slipped as well, suggesting that confidence in available storage for delivery on May 20 was low.

This creates a particularly stark challenge for the United States, where a prolonged low-price environment has already introduced considerable stress on small cap producers across the US shale patch. A longstanding free-market approach to the industry has left the decision to continue to produce or shut-in wells to the producers themselves, rather than in OPEC+ countries where production quotas can be mandated.

This leaves the current approach from the federal government lacking, one in which WTI oil prices are responding to a storage crisis which might not be resolved by a combination of organic production declines and cuts from OPEC+ alone. On April 20, US President Donald J. Trump specifically called on Energy Secretary Dan Brouillette and Treasury Secretary Steve Mnuchin via Twitter to come up with a response to historic low prices and vowed to never let the US oil and gas industry down, setting the stage for federal action in the sector. Stabilizing prices will require an additional step to support the market until oil consumption begins to recover: alleviating the storage crisis directly, or limiting the amount of oil being produced. Accomplishing either is deeply complicated.

On storage, the US Department of Energy has put forward various proposals for storing excess production, announcing last week that excess capacity in the Strategic Petroleum Reserve (SPR) would be leased out for producers to store excess crude. On April 20, President Trump made further overtures toward a major purchase for the SPR.

On production, there current is no federal mechanism to institute a federal production quota, leaving any pro-rationing initiative up to local regulators such as the Texas Railroad Commission (TRRC), decided to postpone a vote on a motion to introduce pro-rations on production in Texas on April 21. The motion has thrown the TRRC into a maelstrom of small to mid-size producers being squeezed out by rock-bottom prices wanting price support through production pro-rationing, and larger companies with balance sheets large enough to weather the storm using their weight to limit any intervention in the market.

Meanwhile, a consistent theme remains concerns about the amount of foreign oil entering the United States, highlighted by a Saudi-origin delivery of over 40 million barrels of oil preparing to arrive on US shores in the next few days. This was a consistent refrain during the TRRC hearing last week, and when asked about it during a briefing on April 20, the US president glibly noted, “we already have a lot of oil…we’ll look into it.”

Recent reports also suggest a third option: paying producers to keep the oil in the ground. This is a move that would reportedly pay producers to keep up to 365 million barrels in the ground. Unlike calls to ban fracking or to limit US oil output, this is a move that is within the legal bounds of the Department of Energy and the administration. The 1975 Energy Policy and Conservation Act that outlined the limitations and role of the SPR allows for the government to maintain up to 1 billion barrels of crude reserves while current reserves sit at around 635 million barrels. The Department of Energy would in effect be buying oil for the SPR and storing it before it even comes out of the ground.

Each of these pathways is fraught with challenges. An SPR buy—whether from produced oil or oil still in the ground—would require congressional approval. 365 million barrels of crude—the maximum amount the federal government could buy, would cost over $7 billion even in low-$20 per barrel price range, yet it was only a few weeks ago that US Senator Chuck Schumer (D-NY) made it clear that filling the SPR was a “bail-out for big oil,” blocking a $3 billion SPR purchase in the first round of stimulus. Production quotas are equally as impossible to federally impose as they are to square with a philosophical commitment to the free market—even if shale bankruptcies rise in the Republican Party’s backyard. Tariffs against foreign oil imports are an attractive rhetorical device, but in practice risk betraying the sentiment behind a deal the US president helped broker to steer the market away from a global oil storage crisis in the first place. They also are unlikely to have a significant impact on the market given the small volumes in question and, for West Coast deliveries, the lack of easily transportable alternatives.

If April 20 reinforced one thing, regardless of a landmark deal from OPEC+ the market does not appear to be steadying. Absent a significant change in either the supply or demand picture, the available options to prevent a similar story for WTI come the arrival of June contracts are undesirable at-best.

John Soughan is an intern with the Atlantic Council Global Energy Center.

The result of the OPEC+ marathon negotiations should help restore some positive market sentiment and possibly firm up something of a price floor over the short term. However, the impact of a month-long price war, amidst deteriorating oil demand, risks eventually drawing the deal into sharp relief over the next few weeks.

Russia’s price war with Saudi Arabia backfired, and Putin’s backtracking may signal that he is starting to sour on one of his key officials.