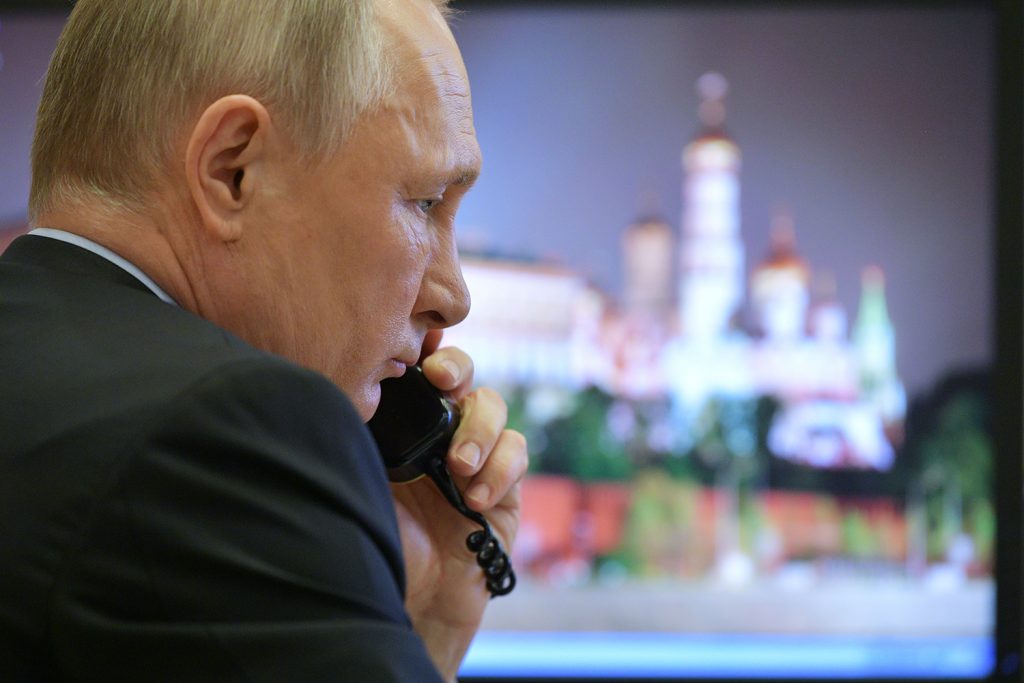 On March 6, Russia surprised the world by starting an oil price war with Saudi Arabia. Russia refused to cut its oil production of 11.3 million barrels per day (bpd) in 2019 to reach an agreement with the Organization of the Petroleum Exporting Countries Plus (OPEC+) on coordinated production cuts to stop oil prices from collapsing. Saudi Arabia and the United Arab Emirates responded by announcing large production increases. After less than a month, Russia gave up and accepted twice as big cuts of about 2 million bpd. This swift Russian reversal sheds light on how Russia’s oil policy is made.

The price war had a massive and immediate market effect. As demand has fallen sharply with the global COVID-19 recession, the world is flooded with oil, and virtually all storage capacity has now been filled up. Oil prices fell much more than the Russians had anticipated, as the Brent oil plummeted to $20 per barrel and the Russian Urals standard touched below $11 per barrel.

Although Russia’s production costs are low at $10-15 per barrel, this was too much. Russia’s biggest private oil company Lukoil, producing 1.8 million bpd, warned that it would have to cut production by half. Moreover, Russian oil companies cannot ramp up production fast again because many of their wells would be flooded with water if they were closed.

Sechin called for an oil price war, boasting that Russia was the “Great Energy Power.” He argued that US shale oil companies would soon go bankrupt. Saudi Arabia had a bigger budget deficit and less international currency reserves than Russia, so Russia would beat Saudi Arabia too. Sechin is one Putin’s closest associates, so the other oil executives didn’t dare to speak up. Krutikhin claims that all the others opposed a price war but, as is usually the case, Putin bought Sechin’s line, not asking the others what they thought.

Sechin has frequently caused the Russian economy great damage, but Putin has usually allowed him great leeway. But Putin has also demonstratively been trying to mend fences with the Saudis. On April 3, he held a highly-publicized meeting about global oil markets, showing his concern. Not mentioning Sechin, he blamed the oil price war on the Saudis and turned to Energy Minister Alexander Novak for its resolution. On April 10, Putin’s public record contains three phone conversations about oil prices, one with King Salman of Saudi Arabia and US President Donald J. Trump, another with only Trump, and a third with Saudi Crown Prince Mohammed bin Salman. Putin hardly ever works the phones like this, demonstrating his great concern over the issue.

Russia’s other oil barons are usually taciturn, but on April 11 Lukoil’s clever Vice President Leonid Fedun gave a candid interview to the influential business media group RBC. Fedun has been the leader of the private oil company lobby calling for an agreement with OPEC on oil price cuts all along. His interview looks like a victory lap.

Diplomatically, Fedun avoids mentioning Sechin, while he thanks Putin profusely (implicitly for having gone against Sechin). “During the last days we saw [Putin’s] unprecedented engagement in the negotiations on and the organization of this deal.” He also praises Energy Minister Alexander Novak (who functions as a counterweight to Sechin). Usually, Lukoil is discussed as the most likely next victim of Sechin’s aggressive corporate raiding, so Fedun’s public clarity is remarkable.

The conclusion is clear. Russia overplayed its hand in early March declaring an oil price war against Saudi Arabia and the United States and is now creeping to the cross. Evidently, Putin realized that the Russian economy is much weaker than he thought because he is the real decisionmaker.

The culprit was Sechin, but it is remarkable that the private Russian oil companies defeated state-owned Rosneft and Putin’s favorite Sechin and that a seasoned power player like Fedun dares to gloat in public. Putin has checked Sechin before but never so quickly, which arouses speculation over whether Putin finally has had enough of his shenanigans.

Putin’s wobbly actions raise a broader question about his power. He has seemed uncommonly uncertain amidst the COVID-19 pandemic. He has given two addresses to the nation, closing the whole country for holiday for the whole of April, and he has postponed his plebiscite on constitutional changes until an unknown date. While highly restrictive, Russia’s pandemic policy has been pretty confused and largely delegated to the regional governors. Yet, Putin has looked shaken many times before, and calmly recovered his power.

Anders Åslund is a senior fellow at the Atlantic Council. His latest book is “Russia’s Crony Capitalism: The Path from Market Economy to Kleptocracy.”

The compelling incentives for Saudi-Russian rapprochement

The impact of this price war combined with the demand destruction triggered by the impact of the coronavirus are likely to force both Russian and Saudi Arabia back to the negotiating table to agree a deal which will—at least in substance—restore OPEC plus, sooner rather than later.

Image: Russian President Vladimir Putin work before a meeting on the situation with the spread of the coronavirus disease (COVID-19) in Russia, at the Novo-Ogaryovo state residence outside Moscow, Russia April 13, 2020. Sputnik/Alexei Druzhinin/Kremlin via REUTERS