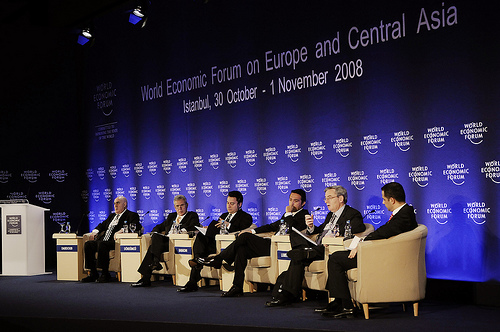 As almost everyone now agrees, recovery from what promises to be a protracted global recession will require a multilateral effort.   In an increasingly interconnected world, the politics of mutualism, as I have written elsewhere, will force developed as well as emerging countries to rely on each other.

Because of the reluctance of Europe and the US to share their control of international financial institutions with such emerging powers as China and India, however, one should not expect another Bretton Woods agreement any time soon.   In the near term, mutualism is instead likely to be reflected in closer regional cooperation, particularly in Asia.

Because their economies have not suffered the massive loss of liquidity that has afflicted Europe and the United States, Asian states have received less attention from financial commentators.  Nonetheless, for the second time in a decade, they feel that they have been let down by the West, which is losing its luster as a model of good governance and financial rectitude.  Moreover, as was the case in the Asian currency crisis of 1997-98, they again are facing the erosion of their export markets.  For countries in Southeast Asia and even Australia, China’s declining demand for commodities and manufacturing components exacerbates the problem.  Asia-Pacific states can beggar each other for advantage in dwindling export markets or they can instead build the integrated regional market that they failed to erect after the last financial crisis a decade ago.

In 1997, the flood of short-term Western investment capital, or hot money, that poured into Asia inflated local currencies and overwhelmed the capabilities of poorly regulated banks.  Its retreat provoked a chain-reaction of currency devaluations that, a year later, resulted in major economic contractions in Indonesia, Malaysia, Thailand, South Korea, and elsewhere.  Instead of offering assistance, Western financial institutions, in marked contrast to their current behavior, counseled Asians to raise interest rates, balance budgets, and allow poorly performing banks to fail. Worse, the US rebuffed Japanese efforts to create an Asian Monetary Fund, ostensibly because they feared the relaxed conditionality of aid would increase moral hazard but fundamentally because it threatened  to circumvent the IMF and the primacy of the US and Europe.

Bereft of help, and worried about their excessive dependence on Western export markets, the Association of Southeast Nations (ASEAN) redoubled their interest in regional cooperation as an insurance policy against the vicissitudes of globalization.  Thanks to China, their longstanding rhetoric of good intentions was transformed into reality.  In 2001, ASEAN signed a free trade agreement with China and subsequently developed an action plan that set concrete goals for integration.  Earlier this year, it entered into similar agreements with Japan and India.

China, along with Japan and South Korea, also began to discuss ways to avert future financial calamities.  Their discussions led to the Chiang Mai Initiative, a Japanese led effort and successor to the aborted Asian Monetary Fund that provided for bilateral currency swaps to help countries undergoing balance-of-payments problems.  Last year, finance ministers of the participating states agreed to transform bilateral swaps into a multilateral mechanism.

The current credit crisis and pending recession, which has already begun in Europe, are likely to provide a second stimulus to Asian integration.  If the dislocations caused by the pending economic downturn prove to be protracted, they are likely to result in greater Asian interdependence.  Much is to be done.  At present intra-Asian trade is only about two-thirds of the level of intra-EU trade.  To achieve a truly integrated region, states will need to make greater investments in education, infrastructure, and new technology.  Funding such projects as well as mitigating the effects of future financial crises calls for the creation of a massive stability fund, which, in turn, will require a unified market for bonds denominated in a regional currency based on the yen, renminbi, and perhaps the South Korean won.

This does not mean that Asia will turn its back on the West.  As last week’s meeting in Beijing, Asian leaders joined their European counterparts in supporting a coordinated  response to the global financial crisis.  In the course of their discussions, Indian Prime Minister Manmohan Singh reminded European leaders that global economy necessitates a global polity.  But Japan’s role in the G-8 excepted, there are no signs that the West wants to share global governance with them.

Thus far, Western leaders and financial experts such as Jeffrey Sachs have exhorted Asians, especially China, to mobilize their foreign currency reserves in support of global financial stability without giving them a privileged place in the new order.  It is hard to see why they would cooperate.  Unless they are permitted to help set the rules of a new financial and trading system, they are more likely to invest their resources in furthering the process of Asianization, the success of which should also benefit Western trading partners.

Hugh De Santis is an international consultant.  A former career officer in the Department of State and chair of the Department of National Security Strategy at the National War College, he is the author of Beyond Progress: An Interpretive Odyssey to the Future. Photo credit:  World Economic Forum under Creative Commons license.