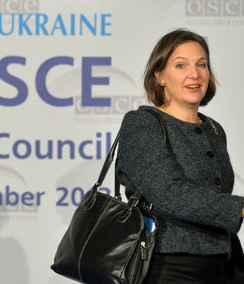 Assistant Secretary Nuland participated in the Ministerial meeting of the Organization for Security and Cooperation in Europe (OSCE) and met with civil society representatives from across the OSCE region. Assistant Secretary Nuland attended bilateral meetings with Ukrainian officials, parliamentary leaders, and civil society. Below are her remarks from the OSCE Ministerial.

What a moment this is for Ukraine, what a moment this is for the OSCE.  The whole world is watching.  All the principles and values on which this Organization was founded almost 40 years ago hang in the balance today between the Maidan and Bankova, and across this country:  sovereignty, freedom of choice, freedom of association and alliance, freedom of assembly and expression, democracy and constitutional governance, peace and stability.  This is Ukraine’s moment to meet the aspirations of its people or to disappoint them, and risk descending into chaos and violence.  What happens here matters to all of us and to this Organization.  And the voices of the Ukrainian people today echo those of so many who came before them, here and in other parts of the OSCE space, throughout this Organization’s history.

There should be no doubt about where the United States stands on this.  We stand with the people of Ukraine who see their future in Europe and want to bring their country back to economic health and unity.  We also believe that our shared OSCE values and principles offer the only sustainable course to this future:  all sides must renounce violence; those who abuse human rights must face justice; the fundamental freedoms of expression and peaceful assembly must be respected; journalists must be protected, and democratic norms and the rule of law must be upheld.  As Secretary Kerry said this week, the people of Ukraine have the right to choose their own future.  We urge the Ukrainian government to listen to the voices of its people who want to live in freedom, opportunity and prosperity.  The United States will support and work with a Ukraine that is on this path.

Here in Ukraine and across our countries, we are reminded of the enduring truth of the OSCE’s comprehensive security concept:  respect for human rights and fundamental freedoms is essential to the progress and long-term security of this country and to all our countries.

Yet we must also acknowledge that the failures by OSCE participating States to implement human dimension commitments today are too numerous to recount, and this is a legitimate concern for all of us.  I’d like to highlight three worrying trends today.

First, the space for freedom of expression on-line and off-line continues to shrink.  Members of the media are physically assaulted – even murdered – often with impunity.  In a number of participating States, anti-extremism laws are used against peaceful civil society members and journalists for what they say, print, broadcast, blog, text or tweet.

Kazakhstan has reduced space for opposition-supported media outlets.  In Azerbaijan, NGOs have named at least 10 journalists and bloggers as political prisoners or detainees.  Harassment of journalists is widespread in Uzbekistan, a country that the Committee to Protect Journalists says houses the world’s longest imprisoned journalist.  Democracies like Hungary and Turkey must also protect legal and political space for dissent and criticism by citizens and the media alike.

Second, the rising tide of intolerance — east and west of Vienna — is often greeted with passivity or active encouragement from those in power.  In many EU states, public officials have made blatantly intolerant statements about Roma.  In Russia, the so-called anti-gay propaganda law has been followed by an uptick in anti-LGBT violence.  Anti–Semitism, xenophobia and anti-Muslim sentiment are also rising in the European and Eurasian space.

Third, widespread democratic backsliding, including a crackdown on civil society, continues to place severe pressure on human rights activists and NGOs.  Restrictive laws and practices violate freedom of expression, association, peaceful assembly and religion.  Belarus is in its third year of a crackdown following the flawed Presidential elections in 2010.  In Russia, the continued detention and prosecution on political grounds of demonstrators in the Bolotnaya Square case discourage others from exercising their right to peaceful protest.  In a number of participating States, citizens risk reprisal for running for office or reporting on the conduct of elections.

We can do better in the first dimension as well.  Conventional arms control and confidence and security building measures have made a substantial contribution to stability in Europe and Eurasia.  But we must do more.  As we head toward the OSCE’s 40th anniversary in 2015, let’s commit to increase trust and stability through greater mutual predictability, by both implementing and expanding on our existing commitments.  Let’s also redouble our efforts to help the people of Georgia and Moldova, and to address the conflict in Nagorno-Karabakh.  Citizens in all these places have waited too long for a Europe whole, free and at peace to come to them.  In Georgia, the situation has deteriorated with the fencing of the occupied territories.  In Moldova, it is past time to support the government’s sovereign request that Russian troops be replaced by a civilian mission.  And we must support the renewed dialog between Azerbaijani President Aliyev and Armenian President Sargsyan as the best hope for a sustainable peace.  A new energy in first dimension issues would also build trust and a basis for cooperation in response to transnational threats we all face and efforts to advance regional security, particularly as we welcome a transition in Afghanistan in 2014.

We have much more we can do together in the second dimension as well.  Our Good Governance Declaration from Dublin last year gives us a roadmap to fight one of the greatest threats to our shared prosperity:  corruption.  The United States sees the potential for expanded practical work on fostering infrastructure and energy security, as well, and tackling economic and environmental issues through field offices, among participating states, and in our engagement with the private sector and other civil society actors.

We also need to protect and use the very effective mechanisms and tools that the OSCE has built over its nearly 40 years.  Our field offices and institutions are the OSCE’s most visible and practical link to our citizens.  They contribute to all three dimensions of security by helping participating States deliver real change on the ground in the form of cleaner government, better implementation of commitments on human rights, media freedom, tolerance, rule of law and democratic elections;  improved environmental practices, stronger democratic institutions, and confidence building where populations are divided.  We should celebrate and support them, not shut them down.  More broadly, as we prepare for our 40th birthday, the OSCE needs to stop playing small-ball and get back into the game on the biggest challenges facing Europe and Eurasia – protecting freedom, security, prosperity and peace.  We made a good start this week with the adoption of the first cyber confidence building measures in a regional security organization.  We congratulate all the countries who worked on that, including the Russian Federation.

I met with civil society representatives this morning, and they are full of constructive ideas on all three dimensions.  One particular recommendation is that the Chairman-in-Office can lead by example by inviting the OSCE to have a continuing role here in helping to build trust.  A unique feature of the OSCE is the connection it builds between governments and citizens.  We must celebrate and strengthen this too.  Nowhere is that more important today than right here, in Ukraine.

Foreign Minister Kozhara, Assistant Secretary Biswal and I, and the entire U.S. delegation, thank you for hosting us today.  May Kyiv 2013 be remembered in Ukrainian and in OSCE history as a moment of choice for democracy, prosperity, the rule of law, the rights of the individual, for Europe and for a more free world.