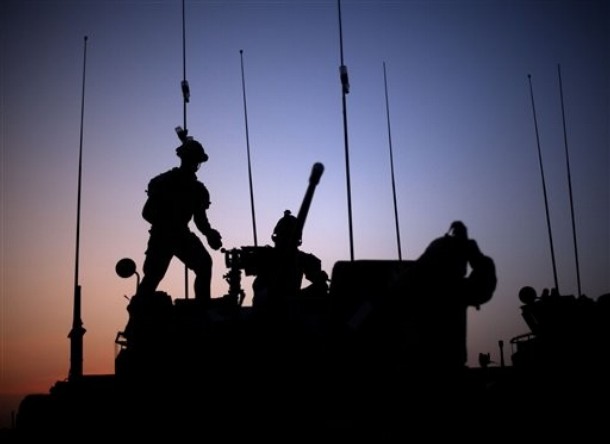 Baden, Austria. Here in this beautiful spa town that adorns the southern rim of Vienna azaleas, petunias and rose cascade and tumble down manicured hills of bloom onto green swards that guard deep and soulful pools of reflective water. My friend and colleague Dr Franco Algieri of the Austrian Institute for European and Security Studies has a knack for the catchphrases of insecurity and uncertainty that pepper security wonkery here at the heart of the European Onion.

Baden, Franco suggests, is a metaphor for Europe – the Austrianisation of Europe – comfortable to the point of self-delusion. Europe, like Austria, is a shrinking pool of western peace surrounded by the encroaching weeds of eastern disorder. This is how the Romans of the fourth century must have perceived their own peace, their own space. In the far distance lies Hungary, visible to the naked eye and offering the first frissons of an alluring but threatening East. The road beyond leads to Afghanistan; but it is still a world or two away.

Which way to go? President Obama clearly does not know. Last week’s one foot forward, two feet back decision to withdraw ten thousand American troops by year’s end, and another twenty thousand six months hence is worthy of Lewis Carroll. “One day Alice came to a fork in the road and saw a Cheshire cat in a tree. Which road do I take? She asked. “Where do you want to go?” was his response. “I don’t know”, Alice answered. “Then”, said the cat, “it doesn’t matter.”

The Afghan sun is dipping and another night of chaos beckons. The West’s attempts to ‘civilianise’ Afghanistan now seem doomed; to be judged by history as simply another failed detour by the greatest of powers into the weakest. Once the inevitable spin has lost its dark magic the Americans, and their recalcitrant partners, will be deemed by historians yet to be conceived as no more successful than their Soviet, British or Mogul forebears. The only difference being that the ‘defeat’ will have been as much self-inflicted as Afghan inflicted.

So, Afghanistan is doomed to remain a space, rather than a place and will now never make the journey to anything other than the most pitiful of states; reminiscent of another age here when picturesque castles were the homes of rapacious bandits menacing and protecting in equal measure. .

I have visited that challenged Afghan space. I have toured Kabul protected by my Movement Protection Squad. I have walked the dust of Kandahar. I have looked up at an old British fort near Qalat. I have spoken with elders in Mordakhan Kalay deep in the Pashtu heartlands. I have seen the beauty and the beast that is Afghanistan.

Today, those Afghans who had hoped that the West could make a difference will be thinking of escape. Those who sat on the fence between order and disorder will slide off towards the latter. Warlords will be considering their next move in the forecourt of future civil war. And, the Taliban will talk to their British negotiators firm in the belief that with the West packing up its watches they have the time.

In reality, most Western political leaders tuned mentally out of Afghanistan a long time ago, if they ever tuned in. With honourable exceptions (well, one honourable exception) European Onion countries and the European Onion itself, were never serious. Even those claiming to have tuned in left it to their hard-pressed militaries to ‘resolve’ Afghanistan. And, soldiers being soldiers they tried. Oh, how they tried. But the seeds of failure were also sown at the outset by an America that confused values with interests, just when Washington was at its self-eulogising worst with little understanding of the very real limits of its power and influence. One has only to read Rudyard Kipling to realize the power of Afgahnistan to humble the mightiest of powers.

So, the drugs will still flow from the feudal fields of poppy, the nuclear-armed neighbours will go back to using Afghanistan as their proxy punch bag and Al Qaeda, shorn of its Sheikh, will slowly move back into the Ruds of southern and eastern Afghanistan. Leaders in Kabul who bear much responsibility for this failure, will be considering which Geneva bank offers the best return for their ill-gotten gains.

In keeping with other great retreats President Obama will host a conference next May in Washington at which blame will be spread and responsibilities apportioned. The mythical ‘international community’ will be invited to create new futures for Afghans. But as the champagne is quaffed it is old futures rather that will busy the minds of Afghans.

Ten years on from 911 and now unwelcome guests the least we the West can do before we close the door behind us is to give the people some little hope. At least one final attempt must be made to bridge macro and micro-Afghanistan – we owe it them, we owe it to ourselves. Specifically, that means bringing together the National Stability Programme and the village-level Community Development Councils. That means making a concerted effort to create an Afghan National Army and Afghan national and local police worthy of the name. That means focusing all efforts on the NATO Training Mission-Afghanistan, and forgetting the weak EU Police Mission which is the talk-talk Onion at its worst. The very fate of millions of Afghans could depend upon the extent to which structure eclipses the chaos that the warlords we accommodated now seek and expect. The most they and we can hope for now is Afghanistan-lite.

Above all, we owe it to our soldiers who have been sacrificed in their thousands. The ordinary Grunts, Tommies, Canucks and Aussies (only the Anglosphere was really serious – Onionistas beware), the soldiers who have borne much the worst of this struggle – far from home and far from societies detached from their and any reality. Kipling offers a stark warning of the consequences of failure from the same space at another time. “When you’re wounded and left on Afghanistan’s plains, and the women come out to cut up what remains, jest roll to your rifle and blow out your brains and go to your gawd like a soldier”. Surely, this struggle must be for more than that.

At the going down of the Afghan sun, shall we remember them? Not here in Baden. But, remember the road to Afghanistan leads both ways and it is not that far away.