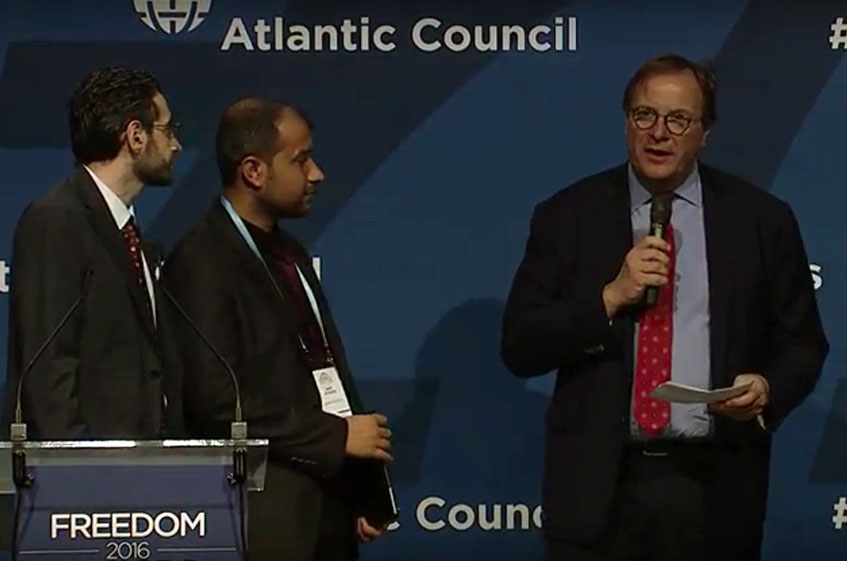 Recipients of the Atlantic Council’s Freedom Awards on June 3 delivered impassioned pleas to safeguard the freedoms they have dedicated their lives to protect.

“By criminalizing forms of expression, unintentionally or otherwise, we risk pushing people into the welcoming arms of extremists,” said Nighat Dad, a Pakistani Internet activist and founder of Digital Rights Foundation.

“Covering our eyes, ears and mouths will not protect us from evil, but it will make it harder for people to be involved in the valuable discourse that is at the heart of social and financial progress,” she added.

Dad was one of four recipients of the Freedom Award, which was presented at the Wrocław Global Forum in Wrocław, Poland. The forum was co-hosted by the Atlantic Council, the Polish Institute of International Affairs, and the City of Wrocław.

Other awardees were: Horst Teltschik, who served as national security advisor to then German Chancellor Helmut Kohl; Maciej Zieba, a Polish priest who has an extensive history in the Roman Catholic Church and the Solidarity movement in Poland; and the Syrian Civil Defense, also known as the White Helmets, a group of volunteers who conduct search-and-rescue missions after barrel bomb attacks in Syria.

The Atlantic Council presents the award to individuals or organizations that have defended and advanced the cause of freedom around the world. Past awardees include former US Secretary of State Hillary Rodham Clinton, Czech politician Václav Havel, and Pakistani activist Malala Yousafzai.

“The awards we present honor those who are resilient, unbending, unique, and committed to their individual and collective ability to bring about change,” said Atlantic Council President and CEO Frederick Kempe.

“These awardees, and hundreds and thousands like them around the world, are an antidote to those who stand by in despair, resignation or ignorance in the face of despotism, oppression, and violent extremism,” he added.

Atlantic Council Chairman Jon M. Huntsman, Jr., said the honorees exemplify how “dedicated, passionate individuals can change the world, one person in the name of freedom, and the countless lives they can touch in doing so.”

The threat to democratic society

In his remarks, Zieba noted the importance of safeguarding democracy. Sovereignty and building institutions is not enough, he said. Zieba contended that the primary danger to a free and democratic society is “neither anarchic disintegration of the community, nor totalitarian tyranny. The primary danger is passivity and conformism.”

Jan Krzysztof Bielecki, a former prime minister of Poland, introduced Zieba at the awards ceremony. Zieba was a member of the Polish resistance movement in the late 1970s and in the 1980s and worked with the Solidarity trade union that was opposed by the Polish regime at the time. In 1992, he co-founded the Tertio Millennio Seminar on the Free Society, which aims to increase discourse on social doctrines by connecting students in North America with students in new democracies in Central and Eastern Europe.

In his acceptance speech, Teltschik said he was “truly delighted” to receive the award in Poland. “For me, the Polish people belong to those nations in our world who love their freedom and who have demonstrated more than once in their history that they are ready to fight and—if necessary—even sacrifice their own lives, in order to be free,” he said.

Teltschik, who chaired the Munich Security Conference from 1999 to 2008, is a leader of Global Zero, an international movement that is working on a plan to eliminate all nuclear weapons by 2030.

Andrius Kubilius, a former Prime Minister of Lithuania, introduced Teltschik at the dinner. Brent Scowcroft, a former US national security advisor and chairman emeritus of the Atlantic Council’s International Advisory Board, delivered greetings via a video message.

While in office, Scowcroft and Teltschik shared a private phone line and used to talk almost every day. “Our connection allowed things to happen with confidence on both sides that never could have happened before,” said Scowcroft.

“You represent a strand of thinking that has been lacking since the end of the Cold War. It is time we take a page from your book and we talk to each other deeply and sincerely because the path ahead is not much clearer than it was in 1989,” he added.

In 1989, Teltschik traveled to Poland as a personal emissary of Kohl’s and negotiated a German-Polish Declaration on the future relationship between the two countries. He said that the overthrow of the communist system in Poland by the Solidarność movement in the summer of 1989 filled him with optimism about German reunification.

“And in November 1989, Lech Walesa said the same to Chancellor Kohl—he said that this will be the beginning of the German reunification process. He was right,” said Teltschik. “And by saying this to us, he supported our efforts to move ahead with it.” The Berlin Wall was brought down in November of 1989.

Solidarność reflected the late Pope John Paul II’s teaching about human dignity and freedom, said Zieba. “A community of free men and women. A community built on the respect for the dignity of human being—each and every human being,” he said. But living by this principle has proven harder in a free and democratic state, he added.

“The street wisdom was clear: the only chance for Polish freedom was the Third World War. The childhood behind the Iron Curtain was hopeless, full of fear and communist lies,” he added.

Introducing the White Helmets, Frederic C. Hof, Director of the Atlantic Council’s Rafik Hariri Center for the Middle East, said that the targeting of civilians in Syria’s war has not been accidental.

“This has been a war in which a government has inflicted mass homicide on its own citizens,” said Hof. “The world has paid little heed to the apocalypse that is Syria.”

In Syria, more than 250,000 people have been killed, five million people have fled, and seven million others have been displaced within the country since the war erupted in 2011.

“The White Helmets have stood for courage, decency, mercy, and honor in a conflict often devoid of each,” said Hof.

Raed al-Saleh and Farouq al-Habib accepted the award on behalf of the group that has more than 3,000 volunteers in eight governorates in Syria.

Al-Habib said the group had saved more than 50,000 lives. “The White Helmets, we believe, are freedom fighters because they work to free lives of people from under the rubble of destruction,” said al-Habib.

The volunteers work in perilous conditions. Syrian President Bashar al-Assad’s forces often use a tactic known as the “double tap,” where they will drop a barrel bomb and then drop another after first responders and crowds gather at the scene.

Shaukat Aziz, a former prime minister of Pakistan and a member of the Atlantic Council’s International Advisory Board, introduced Dad.

In her acceptance speech, Dad noted the rise of social tensions and economic uncertainty over the past quarter century. Failed and failing states across the Middle East and Africa have produced millions of refugees many of whom are fleeing to Europe. The far right has exploited the societal tensions created by this massive influx of migrants.

“Ours is an unstable world,” she said. “It is in this context that governments have the duty to protect their citizens from harm, to ensure their physical safety both in the present and in the foreseeable future.”

But, Dad added, security—especially efforts to guard against foreign and domestic terrorism—must not come at the cost of civil liberties.

“In the wake of violent attacks worldwide, the rush to give broader powers of surveillance and detainment, the need to control avenues of information, is a reflexive reaction that we must fight,” she said.

“Mass surveillance and invasion of privacy has not discouraged terrorism. Instead, there has directly or indirectly been a chilling effect on the democratic discourse and political actions that are vital to a healthy society, worldwide,” she added. “Healthy criticism of the state, vital in a democracy society, can now result in citizens being monitored and questioned by their own national security agencies. ”

Digital Rights Foundation educates Pakistani Internet users, especially women, on how to protect themselves against online harassment. Dad has led multiple campaigns to protect online freedom of speech in Pakistan and has spoken out against legislation that would give the government broad powers of surveillance and the ability to censor online speech.

Dad sounded an optimistic note saying that despite the prevailing global unease, uncertainty, and conflict “we are also living in a time of greater solidarity in the face of oppression and censorship.”

“Freedom to information is a fundamental right, one that matters online just as much as it does offline. Denying and criminalising one weakens the other, limits our liberties,” she said.

Image: Atlantic Council President and CEO, Frederick Kempe, shared the stage with Farouq al-Habib (left) and Raed al-Saleh who accepted the Council’s Freedom Award on behalf of the Syrian Civil Defense at a ceremony in Wrocław, Poland, on June 3. The all-volunteer group, also known as the White Helmets, conducts search-and-rescue missions after barrel bomb attacks in Syria.