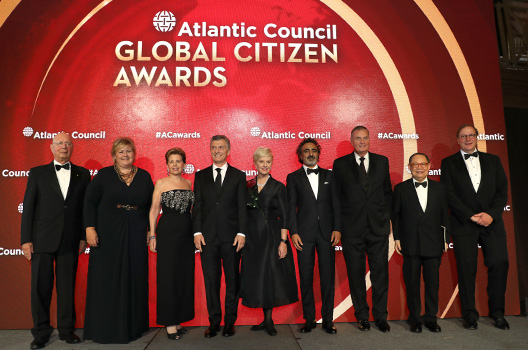 To Norwegian Prime Minister Erna Solberg, being a global citizen means embodying two values: “a sense of shared responsibility and shared purpose.” Speaking at the Atlantic Council’s 9th annual Global Citizen Awards dinner in New York City, Solberg argued that in the world today, as “in a village, you cannot survive without trusting your fellow people. Without joining forces in everyday life.”

Frederick Kempe, president and CEO of the Atlantic Council, said in his opening remarks that “each awardee this evening embodies the leadership, commitment, and character that these challenging times demand.” Kempe added that “we hope that by recognizing these individuals, we could inspire a host of others.”

Ulukaya used his acceptance speech to raise the alarm on the global refugee crisis, which he warned is far from over.

An immigrant to the United States himself, Ulukaya ran a small cheese business in upstate New York before founding Chobani in 2007. In five years, Ulukaya grew his company to the top-selling yogurt brand in the United States.

Almost from the start of Chobani, Ulukaya sought out refugees and hired them at his company. As award presenter, former US ambassador to the United Nations, Samantha Power, described, Ulukaya “celebrat[ed] Chobani’s diversity not as some humanitarian act, but as a core source of its success.”

Ulukaya was recognized by the Atlantic Council for his commitment to helping refugees, both by employing them in his company Chobani and by galvanizing private business support for refugee aid programs. In 2015, Ulukaya founded Tent Partnership for Refugees, a nonprofit organization that mobilizes the private sector to improve the lives of refugees around the world. Today, Tent’s 110 members support 200,000 refugees across thirty-four countries.

While the Council celebrated his achievements, Ulukaya was sure that fellow awardee, McCain, “would say that we have a long way to go.  There’s nothing to celebrate here. Not when 20 million people are displaced from their home. . . Not [when] 60 million people are displaced within their own country. Not when the kids are dying on the way, on the water, on the land.”

When confronted with the horrors of the refugee crisis, Ulukaya recognized that, by engaging with refugees, providing stable work for them, and helping them rebuild their lives, “maybe people like us can do something.” This belief drove him to make Chobani a leader in hiring refugees and coordinate refugee assistance programs, but Ulukaya was firm that this was “not enough.”

“If we don’t start doing something about it, this is going to come and haunt us,” Ulukaya said. “Not only us, it’s going to haunt our children. It doesn’t matter how far we are, the oceans away, or the walls [between us]…we’re going to walk with guilt that we could do something about it and chose to avoid it.”

Although Ulukaya maintained that more must be done, Power praised his determination to do something toward helping the plight of refugees. “Hamdi has shown that just because we can’t solve the world’s problems or the whole problems [ourselves], doesn’t mean we can’t do something to help.”

Macri: ‘We are now doing our homework’

In his acceptance speech, Macri thanked the Atlantic Council for the award, which he accepted as “recognition of all the Argentine people, for the courage that they have shown to stop the direction in which Argentina was going, not to become another Venezuela.”

Venezuela, under the leadership of Nicolás Maduro, is mired in an economic and humanitarian crisis the impact of which is being felt well beyond the country’s borders.

Following its economic meltdown in 2001, Argentina was governed for more than a decade by Néstor Kirchner and later his widow, Cristina Fernández de Kirchner. In 2015, Macri, the conservative mayor of Buenos Aires and leader of the Cambiemos (Let’s Change) party, was elected president of Argentina. Macri has attempted to turn the tide on the populism that brought Argentina to its knees.

“Argentines decided to change,” said Macri. “We changed because we understood that we could not let populism affect deeply our society.”

“We are now doing our homework. We are solving the structural problems of the last fifteen years, such as the fiscal deficit, bringing back the rule of law, the independence of the judicial system, and especially fighting against corruption,” he said.

Macri has struggled to stanch the economic damage caused to Argentina by years of populism. He inherited inflation running at around 25 percent a year. Since then, the peso has tumbled and inflation is at 31 percent and climbing.

In June, the Macri government signed a three-year $50 billion standby financing deal with the International Monetary Fund (IMF). The subsequent slide of the peso contributed to the government proposing austerity measures that, while unpopular in Argentina, have been welcomed by the IMF. The government and the IMF are now finalizing an agreement on the revised fiscal targets. Macri said in an interview with Bloomberg television this week that there is “no chance Argentina will default.”

“It took us more than fifty years to learn from our mistakes: to learn that we need to put our energy into the culture of work, into our personal and our collective efforts, believing in our capabilities to improve ourselves and, at the same time, be a part of the world,” Macri said at the Atlantic Council event. He was presented the award by Adrienne Arsht, the executive vice chair of the Atlantic Council’s board of directors and the International Advisory Board.

Macri said his government has bet on “strategic integration and mature relations with the world.”

“This,” he explained, “increases the prosperity and security of Argentines. It also contributes to building a global order that is stable, inclusive and respectful of our values: peace, democracy and human rights.”

Argentina will host a meeting of the Group of Twenty (G20) this year. Macri views this as an opportunity to show Argentina’s commitment to international cooperation, multilateralism, and global governance.

Erna Solberg on the importance of an interconnected world

The night’s other awardee, Norwegian Prime Minister Erna Solberg, delivered a passionate plea for working together.

Noting in her remarks that globalization has come under pressure around the world, she contended: “we should not be surprised.” Describing globalization as having been “very beneficial to our societies,” Solberg said, “we have to recognize that it has not been equally beneficial to all. This is a very real challenge.”

Solberg said she was worried by what she described as the “false divisions” between “global and local concerns” and the way they are being used to drive a political wedge between groups in many countries. Or, “to pit parts of the population against a perceived elite… and to challenge values and democratic institutions in a way that, in the past, would have been beyond reproach,” as she described it.

Despite these challenges, Solberg was optimistic about the future. “You might think that the golden days of globalization are behind us,” she said, “but in fact, we are more connected and interdependent now than ever. Products, services, ideas and talent are flowing across borders like never before. Our way of life and our prosperity are profoundly affected by the global nature of our societies.”

The Norwegian leader said trust in fellow citizens and collaboration are the principles that have shaped modern Norway. “To me, they also embody the very essence of being a global citizen: A sense of shared responsibility and shared purpose,” she added. This means, “understanding that we cannot avoid the consequences of climate change, pandemics, conflicts or suffering in other parts of the village.”

Klaus Schwab, the founder of the World Economic Forum and an inaugural recipient of the Atlantic Council’s Global Citizen Award, said that with leaders like Solberg putting development and equality at the top of the agenda, “we can relegate poverty to the history books.”

Solberg listed three areas that she believes are key to international engagement—free, quality education; understanding the challenge of global warming, specifically the threat it poses to biodiversity and marine life, and the cost of failure to address the problem; understanding the importance of working together in multilateral institutions such as the United Nations, the World Trade Organization, the European Union, and NATO.

“On the ruins of two devastating world wars, and under US leadership, we built a rules-based world order that has served us well over the last seventy years,” Solberg said.

“An interconnected world is not a figure of speech. It is a reality,” she added.