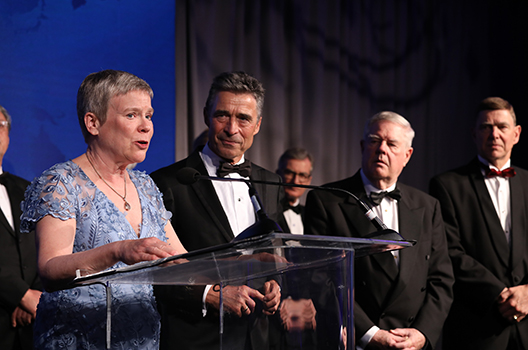 To mark the seventieth anniversary of the North Atlantic Treaty Organization (NATO), the Atlantic Council honored the Alliance and its twenty-nine-member countries with a distinguished leadership award, the first time an international organization has been presented with that distinction.

Retired Marine Corps Gen. James L. Jones, Jr., a former Supreme Allied Commander Europe and executive chairman emeritus of the Atlantic Council said at the Atlantic Council Distinguished Leadership Awards Dinner on April 30, that NATO was being recognized “for the Alliance’s role in assuring peace, stability, and security in Europe and North America for the last seventy years.”

The award was accepted by NATO Deputy Secretary Rose Gottemoeller, who was joined onstage by representatives of NATO’s former and current leadership and fourteen ambassadors from NATO member states. Three other former Supreme Allied Commanders were also in attendance alongside Jones: General Stéphane Abrial, General Wesley Clark, and General Joseph W. Ralston. Gottemoeller said she accepted the award “on behalf of men and women—all around the world and down the decades—who have helped make NATO what it is today.”

“What we are celebrating here tonight,” she said, are “the benefits that seventy years of unprecedented freedom and peace have brought to all of our countries [and] people.” Gottemoeller highlighted the shared history of NATO and the Atlantic Council, which were “offspring of the same visionary founders.” One of those founders, former US secretary of state Dean Acheson, Gottemoeller explained, signed NATO’s founding treaty seventy years ago with a “hope that new strength and courage would come to all peoples of the word who seek freedom and peace.”

NATO Secretary Jens Stoltenberg also provided brief video remarks, arguing that “NATO is the most successful alliance in history because through the decades we have kept our commitment to protect and defend one another and because we have adapted as the world around us changes.”

Although NATO European allies have been harshly criticized by US President Donald J. Trump over the last two years for not spending enough on their own defense, Stoltenberg maintained that “NATO is good for Europe and it is good for the United States…Together Europe and North America are greater than the sum of their parts.” On April 3, Stoltenberg highlighted the value of the transatlantic alliance during an address to the US Congress, which was widely praised by members of both political parties.

Stoltenberg told the audience in Washington on April 30 that “with your help, with increased investment, and strong political will, NATO will ensure our freedom and security for many more years to come.”

Gottemoeller hoped that “like those visionary leaders who came before us, may we always have the strength and courage to stand firm for freedom and peace.”