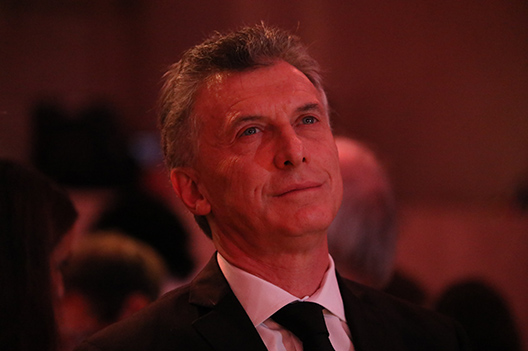 On September 24, 2018, the Atlantic Council, in its ninth annual Global Citizen Award dinner, presented Argentine President Mauricio Macri with the award for his tireless efforts to renew Argentina’s role as a pivotal global player. The award was also presented to President Macri for his commitment to putting Argentina on a sustainable path, and in doing so, delivering on the promise of a prosperous future for the Argentine people.

When Mauricio Macri took office in 2015, he inherited a legacy of mismanagement and enormous budget deficits, with Argentina facing deep structural problems. In nearly three years as president, he has brought Argentina back as a key regional and world leader, reestablishing credibility through a newly transparent statistics bureau and a reopening to international financial markets. As a sign of the country’s renewed global engagement, Argentina assumed the presidency of the Group of Twenty (G20) in 2018 and will host the G20 Leaders Summit in November, following last year’s organization of the World Trade Organization ministerial. On September 26, the International Monetary Fund (IMF) agreed to increase its support to Argentina to $57.1 billion, the largest loan in the Fund’s history, to be disbursed over three years.

Today, Argentina is at a critical moment. Correcting years of overspending, alongside an historic drought, has led to significant depreciation of the Argentine peso, with immense hardship felt by the Argentine people. The path to recovery will not be easy. That is why, now more than ever, Argentina and its people need the support of the global community to achieve the prosperity that is possible. The success of Argentina and President Macri is critical for its people, its neighbors, and for other economies throughout the region and around the world.

The Atlantic Council stands with Argentina as it seeks a better future. In support of the Argentine people, and the efforts taken by President Macri to renew Argentine leadership, we honored him with our Global Citizen Award.