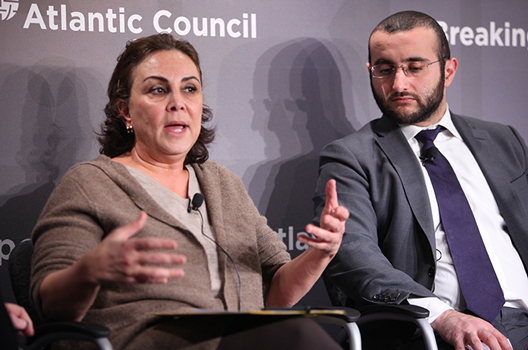 A new Atlantic Council report—Breaking Aleppo—uses satellite images, TV footage, social media, and security camera videos to debunk Russia’s claims that no civilians were killed in its airstrikes on the city of Aleppo in support of Syrian President Bashar al-Assad’s regime.

“In an era where we’re facing a mixture of falsehoods and truths, the report is incontrovertible evidence,” said Fred Kempe, Atlantic Council president and chief executive officer, adding, “it exposes the deliberate and systematic destruction of Aleppo.” Kempe delivered opening remarks at the report’s launch at the Atlantic Council in Washington on February 13. He described how the report’s findings prove that the Assad regime, backed by Russia and Iran, targeted civilians and noncombatants “in a bid to break the will and spirit of the city.”

The eastern half of Aleppo, held by Syrian rebel forces until its collapse in December of 2016, constituted Syria’s most devastated battleground in the six-year-old civil war.

“The only clear thing in Aleppo was horror,” said Abdul Kafi Alhamdo, a Syrian teacher and activist who lived through the siege. Speaking via Skype, Alhamdo gave a chilling account of his experience of the battle for Aleppo, describing desperate conditions and relentless attacks. “It was a holocaust of Aleppo,” he said. “People there were sentenced to death, not life.”

Frederic C. Hof, director of the Atlantic Council’s Rafik Hariri Center for the Middle East, said Breaking Aleppo provides “an authoritative account of deliberate criminality and conscious efforts to cover it up,” thereby offering truth to counter the lies of Assad and the Kremlin.

Hof described targeted attacks on hospitals, and the use of cluster bombs, incendiaries, barrel bombs, and chemical weapons, all dropped in residential areas of the city, through which the regime aimed to subdue Aleppo “by going after civilians.” There was, however, no definitive international response to the horrors that became a way of life in Aleppo. According to Hof, Assad and Russian President Vladimir Putin were “emboldened by the passivity of a leaderless, hollowed-out West.”

On February 13, Faysal Itani, a senior fellow with the Rafik Hariri Center for the Middle East; Emma Beals, an investigative journalist; and Elliott Higgins, a senior fellow with the Atlantic Council’s Digital Forensic Research Lab (DFRL) and founder of Bellingcat—all authors of the report—joined Lina Murad, a board member of the Syrian American Medical Society, to discuss the methodology and findings of Breaking Aleppo, as well as its regional implications for the conflict. Karen DeYoung, associated editor and senior national security correspondent at the Washington Post, moderated the discussion.

In a short presentation detailing the methods used to uncover and detail the events leading to the fall of Aleppo, Maksymilian Czuperski, director of DFRL and another author of the report, said that all accounts “come to the conclusion that there have been war crimes committed in Aleppo.” He described how the multitude of offenses committed in Aleppo have been obfuscated by competing narratives from all sides.

Breaking Aleppo, through its use of digital forensics and analysis of open-source media, places blame—backed by proof—on Assad and Russia for perpetrating the violence, and details the tactics used to overwhelm the city and its inhabitants.

“This new post-truth phase in international relations… I find it terrifying,” said Itani. However, he said that the tools used to collect intelligence about the fall of Aleppo constitute “outsourcing and democratization as a way of pushing back with tools that are available to anybody.”

The report relied on a multitude of social media messages, videos, satellite imagery, and digital fingerprints to bring the experience on the ground to the fore in a search for authenticity regarding the experience of Aleppo. In one instance, the team was able to analyze the bombing of a hospital in Aleppo, codenamed M10.

Higgins described how the Russian defense ministry presented satellite imagery to bolster its claim that the bombing was fake. The digital forensics team looked at all possible sources of information available online such as video footage, satellite imagery, and photographs, with a focus on verifying the authenticity of each. In particular, Higgins said, the team analyzed the photographs to look at how they related to the physical area. These methods allowed for corroboration to prove that the hospital was bombed, not just once, but three times in one week.

“By combining all of those pieces of information to confirm that this incident did take place… it also proved that the Russian ministry of defense presented information that was completely untrue,” said Higgins.

Czuperski added that similar tactics were used against other hospitals in Aleppo, such as M2, similarly nicknamed by local doctors. The hospital attacks were “intentional strikes on the only places that seemed to be safe for the people of Aleppo.” The repeated targeting of the same hospitals proved the strikes were not accidental, said Czuperski.

The tragedy of Aleppo lies not only in the atrocities inflicted by Assad and the Kremlin, but also the inaction of the international community. Hof said that though there were statements of outrage by Samantha Power, the former US ambassador to the United Nations, and announcements of shock and disappointment by former Secretary of State John Kerry, “nothing short of invading and occupying Syria could be done to protect Syrian civilians from the horror inflicted upon them.”

“I think the international community just decided to turn a blind eye,” said Murad. “It’s not a lack of information, it’s a lack of accountability.” DeYoung added: “it’s not as if the world didn’t know that horrible things were happening in Aleppo… and yet, there was an inability to do anything about it.”

There were a series of attempted ceasefires throughout 2016, brokered by Kerry and his Russian counterpart, Sergey Lavrov. However, none proved successful. Each failed ceasefire was accompanied by a flurry of accusations from all sides as to who was responsible for the violation.

The battle for Aleppo constituted a turning point in the war, said Itani. After the city’s fall, he said, with the United States in a weakened position at the negotiating table and a new administration in Washington, an overthrow of the Assad regime is no longer plausible. According to Itani, nothing “important or significant will happen without the United States getting involved.” Though US engagement could shift the risk calculation of regional actors, as Russia did, the new administration of US President Donald Trump is unlikely to take direct action in response to the atrocities committed in Aleppo, said Itani. But, he added, “I think they would do it if it served a strategic purpose.”

“I wish the atrocities were reason enough, but I think if they weren’t [enough] under the previous administration, they won’t be enough during this one,” he added.

The masses of people evacuated from Aleppo have now resettled in the Syrian city of Idlib, where the panelists fear history might repeat itself. Not only will Assad seek to regain this territory, but due to the concentration of al Qaeda forces in Idlib, the United States is bombing the city as well. Beals described the situation in Idlib as a conflation of security and humanitarian issues where, at present, there are no ostensible arrangements for the protection of civilians.

“We know what’s going to happen,” said Murad, “unfortunately, it’s going to be much worse than Aleppo.”