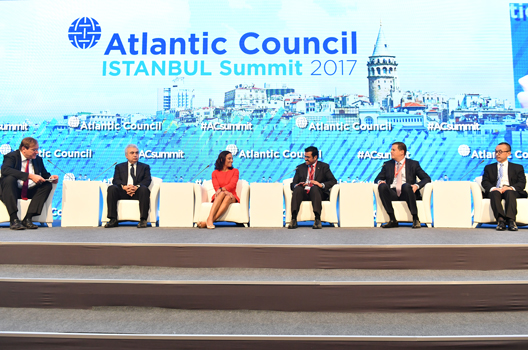 Speakers at the Atlantic Council’s Istanbul Summit on April 27 emphasized the importance of strengthening transatlantic bonds to the Middle East with the goal of jointly addressing challenges and harnessing opportunities.

“We all need each other, and we are strong when we can work together, and pull in the same direction, and address the many challenges in the three regions,” said John Bass, the US ambassador to Turkey.

“We’ve got some differences in the meantime, but how we deal with those differences… is an essential piece of what we do,” he added.

This sentiment reflected the theme of this year’s summit: Strengthening Transatlantic Engagement with a Turbulent Region.

“As our world becomes increasingly interconnected, the value [and] necessity of cooperation can’t be overstated,” said Atlantic Council President and Chief Executive Officer Frederick Kempe, who opened the summit.

Consequently, he said, countries such as the United States, Turkey, and other major players on the world stage must seek to finance growth through economic integration, supported by an energy infrastructure.

“We all know that geopolitics have a heavy implication on energy,” said Fatih Birol, executive director of the International Energy Agency. Now, he added, “the developments in the energy sector will have key implications on the parameters of geopolitics.”

Kempe, Bass, and Birol delivered opening remarks along with Stephen Hadley, executive vice president of the Atlantic Council’s board of directors and a former national security advisor to President George W. Bush; Defne Sadiklar-Arslan, director of the Istanbul Summit and the Atlantic Council’s Turkey representative; and US Secretary of Energy Rick Perry, who recorded a video message for the event.

Their introductions to the summit preceded a panel discussion on the state of the global energy market in which Birol joined Mohammed Saleh Abdulla Al Sada, minister of energy and industry for the State of Qatar; Helima Croft, managing director and global head of commodity strategy and global research at RBC Capital Markets; Maji Jafar, chief executive officer of Crescent Petroleum and board managing director of Dana Gas; and Ken Koyama, managing director and chief economist of the strategy research unit at Japan’s Institute of Energy Economics.

Using the US revolution in shale oil as an example, Birol described how energy developments have an impact on geopolitics. The rapidly increasing production of US shale oil has led to “a major change in the oil markets,” which could see a consequent tightening around 2020.

Pointing to the enhanced US energy security and independence as a result of the shale revolution Birol said: “If I was the Secretary of State of the United States, I would sit in my chair much more comfortably than in the past.”

However, Jafar countered, “energy independence is a myth.” He said that the United States’ position as a major producer of energy makes it more dependent on the market and continuing demand of energy-consuming, as opposed to energy-producing, nations. “It’s good in a sense that US politicians feel less dependent on the Middle East… but we are all interdependent, and I think that’s a good thing in terms of stability,” according to Jafar.

The interdependence of the energy market is most apparent in the dynamics surrounding liquefied natural gas (LNG) exports. “The revolution [in shale oil] is followed by a second revolution, the LNG revolution,” said Birol.

He described how LNG exports serve as a growing alternative to pipelines for the international movement of gas. While Al Sada said Qatar is the global leader in international LNG exports, Birol said, “in addition to Qatar, we are seeing substantial amounts of LNG coming from Australia and the United States.”

According to Birol, an increase in LNG exports has significant geopolitical implications for the market. He described how an influx of LNG in the market can upset the balance of energy supply and demand between producer and consumer nations; as a result, the hands of the gas importer nations will be stronger at the negotiating table. With more exporters entering the LNG market and seeking clients, “there is a historical chance for countries like Turkey to make the most of it,” he said.

However, Birol warned, “to have a stronger hand doesn’t mean, necessarily, that you use it in the best way.”

In addition to an increase in traditional modes of energy production, “renewables are not any more a romantic story. They are a real business in almost every country in the world,” said Birol.

He claimed that the major producers of renewable energy sources are countries with burgeoning economics who are emerging players on the world stage. For example, India’s production of solar energy and China’s production of wind energy demonstrate further links between energy and geopolitics.

According to Birol, the growth of renewables in emerging economies indicates that there can be a reconciliation between environmental stewardship and economic growth.

However, he added, challenges remain in the renewables sector, such as the integration of wind and solar energy into the electricity sector while overcoming the intermittent nature of these energy supplies. Also, while the generation of electricity from renewables has increased, energy use from renewable sources remains at low levels.

As a result, though renewables are emerging, said Jafar, “we can’t neglect the importance of oil and gas.” The Middle East will continue to play a significant role in the global energy dynamic “for a long time to come,” he said.

The enduring significance of the oil market is a further testament to the interdependence of the international community, particularly in the realm of energy. In 2015, the oil market experienced a significant drop in the average price per barrel. Croft described how low oil prices led to a series of political, social, and economic crises in many oil-producing countries, such as Venezuela, which is still wracked by political protests, food and drug shortages, and a humanitarian crisis.

According to Al Sada, “because oil price is linked to the economic growth of the world and vice versa,” a stable oil market is inherently linked to geopolitical stability. To stabilize the market after oil prices fell, in November 2016 the Organization of the Petroleum Exporting Countries (OPEC) adopted an agreement to cut oil production. The agreement, known as the Algiers Accord, demonstrated the importance of international cooperation to ensure stability. According to Croft, countries recognized this and, consequently, “the levels of compliance [with the deal] have so far exceeded expectations.”

However, she warned, despite the arrest of plummeting prices and the market’s return to stability, investors must continue to account for market shocks and their geopolitical ramifications. Croft claimed that there has been complacency among investors regarding looming instability because people believe in shock absorbers which are built into the market. However, she said, “at a certain point, those shock absorbers will be eroded and political risk will impact the market.”

Croft described how the oil market’s recovery has been slow, and circumstances in Venezuela and Iran may still upset the balance. Protests against Venezuelan President Nicolas Maduro rage on in the face of humanitarian crisis, and Iran will have its presidential election on May 19. If Iranian President Hassan Rouhani is not reelected, Croft speculated he could be replaced by another leader less amenable to the nuclear deal negotiated in 2015.

However, Birol pointed to a silver lining to the oil price shock, saying that the crisis served as a reminder for oil-exporting countries to diversify their economic base, otherwise their economies will remain vulnerable.