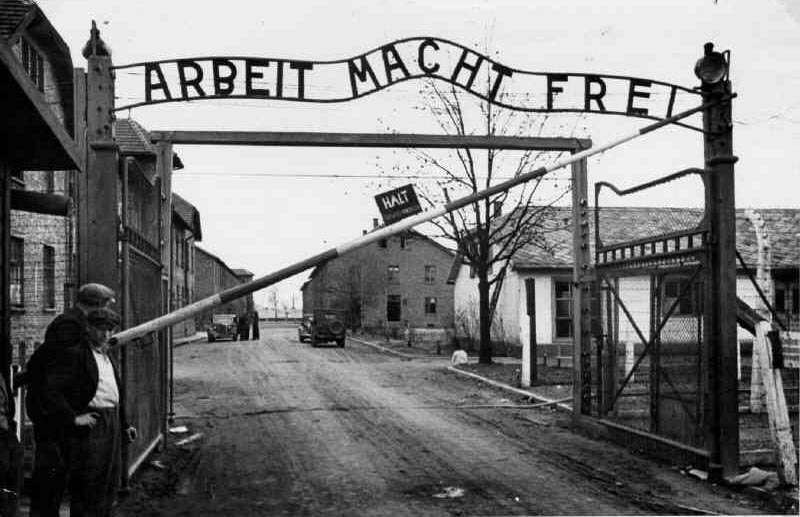 Sunday, I walked in Auschwitz – Auschwitz I and Auschwitz II-Birkenau. I walked before the walls of Elysium, the final resting place of the heroic and virtuous. I paid my respects to people, not numbers. Three of whom spoke to me – Anne Kraus, Hana Weisenkind, and Berta Eppinghausen. They spoke to me not because they are different from any of the other victims of this Megiddo of industrial murder, but because their empty, pathetic suitcases spoke for them; their emptiness beyond words.

This Auschwitz is a place in which evil hides in peace and in which evil is and must be defined. I walked in silence, in utter humility, in anger, in repentance, and in shame. I walked in the footsteps of honored ghosts; honoring with each free step I took, each condemned step I followed on the short but long road of death. 1.1 million Annes, Hanas, and Bertas were murdered in this place. In Auschwitz each and every victim of the Holocaust – the Shoah – was before me, too numerous for me to comprehend, only feel, only sense. Less than a single lifespan ago ordinary Europeans were torn from the fabric of community and butchered in this place, this Auschwitz.

As I walked I thought of my Jewish friends, Scott and Neil and a host of others, spared the ovens by the serendipity of timing, but still burning with the heat of fires lit and fed by endemic evil, hysterical hate, and criminal deed. In Block 11, the ‘Death Block,’ my head became bowed, my heart heavy and I did not know if I would vomit or cry. Today, I was in sheol, a grave with no bodies, only soulful, sad, material remains of people still denied the dignity of identity. I came to honor them and I leave more troubled than this seasoned man of history could possibly have imagined. Oxford letters here count for nothing. In this place a people almost died here; a people triumphed here. Nothing has ever defined a present as eloquently as this recently suffered past.

I was troubled for the past, but also for the present and the future. I watched Prime Minister Binjamin Netanyahu in Washington and like many Europeans felt that tinge of regret, guilt, and frustration that makes me both ambivalent to Israeli policy towards the Palestinians and conscious of an historic duty to support Israel whatever. Indeed, coming here, to this place at this time, my utter commitment to Israel’s right to exist was re-cast, re-forged. No one today can expect Israel to take risks none of us would take, this place put paid to that. Whatever presidents may say a return to Israel’s 1967 borders is not going to happen until Israel’s security is assured. Here in Poland Saturday, President Obama told an old Jewish woman that the US would never abandon Israel. Come to this place.

As I walked I also thought of my Arab friends, of Lena and my recent dinner with Lakhtar Brahimi, one of my heroes. And even in the heart of evil I am sure Israel’s security will never be assured when so many Palestinians seethe with their own sense of injustice. As I walked I was clear-headed enough to know that the past must in time be denied the hunger it has to consume the future. Without a two-state solution that guarantees the security and well-being of Israeli and Palestinian alike there can be no peace in the Middle East, nor I doubt in Europe and beyond.

The respective political currencies of both America and Europe are fatally devalued by the belief of both Israelis and Palestinians that such currency is arbitrary and prejudiced. This place casts a shadow over all. America rightly claims special rights because it was and is the great protector of the Jewish people and Jewish state because of this place. And yet well-intentioned, patient America is perceived by millions of Arabs to be Israel’s advocate. The foundations of the fallen twin towers were first undermined not on the American side of the Atlantic, but on this side. Europe? Auschwitz – this giant maggot of history eats into all of us and taints us by association. The past may indeed be another country, but not here, not in this place. For Israelis we Europeans always favor the ‘other side’, even when we do not.

I walked along the road of death, alongside the final platform where those about to die were separated from those soon to die. From afar I witnessed the hollowed carcass of the peace process descend the long spiral staircase of hopelessness and fear that now spans its own lifetime and which stops this place from ever being in the past..

There are no certainties in this place – then or now. But, looking beyond the killing wire I saw an Israel no more able to escape this place, than the space that pretends to be Palestine. That is the nature of this place.

The new Egypt’s decision to open its border with Gaza heralds a new cycle of change in the Middle East. And yet finally that change need not be defined by this place. A glimmer of an opportunity can be fleetingly glimpsed fluttering in and out of grasp if we all have the vision to grasp it. The Arab Spring is driven not by Islamic medievalists, but by an aspiration for a freedom and liberty only Israelis enjoy in the Middle East. After much European encouragement Fatah and Hamas are beginning the long road to a unity that might in time bring sense to the leaders of Hamas. And, in so doing deny Iran its dangerous mischief. Can this place also be denied?

Beyond the killing wire I could also see a Europe finally ready to join with America to ease Israel’s legitimate fears for its security and offer hope to Palestinians that their statehood is more than a diplomat’s promise. A Europe that stops talking too much of a future defined by this past and which is finally able to live beyond this place and its shadow of death. There in the distance I could see a Europe that took the evil that drapes this place from its own shoulders and seized the chance to redeem itself from the ashes upon which this place stands.

From the depths of the depravity that reeks from every corner and crevice vision is still offered to us by Anne, Hanna and Berta. It is of an America and Europe standing together with Israelis and Palestinians. Genuine, responsible and supportive partners in search of a lasting peace between Israelis and Palestinians, both of whom suffered at the hands of Europe.

A price must be paid. That is the nature of this place. For the spell cast by this place to be begun to be broken real political risk must be taken. For this place vision alone is not enough for it existed and exists to destroy hope. Walking here today I was and am convinced that only if we Europeans actively become a real part of a meaningful peace (there can be no final solutions here) can we atone for this place. Simply throwing large amounts of money can never ease the pain of this place.

Therefore, seventy years on from the commencement of industrial murder a new commitment must emerge from this place to a peace agreement, interim, final or whatever. And, if needs be, the commitment to send a European force, under UN mandate, to assure the confidence such a bold step will demand. Such a force would need to be there at the behest of Israelis and Palestinians, and act on their behalf.

Only such a brave step would honour Anne, Hana and Berta. And, begin to ease the suffering, fear and anger of Arab and Jew alike, which is so easily exploited by the new men of hate who perpetrate the hopelessness of this place. Our resolve will be tested as will the force, and doubtless losses will be taken. And, of course deep fissures will remain – such as the future of settlers and the status of East Jerusalem.

But, there can be no more running away; we would simply be running straight back…to this place.

“For ever let there be a cry of despair and a warning to humanity”, read the stone. I walked in Auschwitz; and Auschwitz spoke to me.