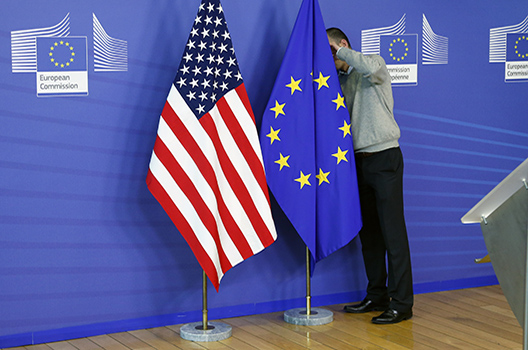 Editor’s note: Coming up on the anniversary of the July 2018 “trade truce” between European Commission President Jean-Claude Juncker and US President Donald J. Trump, little progress has been made in trade negotiations between the United States and the European Union (EU). This article is the fourth in a series that will take stock of the opportunities in and challenges to the deepest trading relationship in the world and focuses on opportunities for further deepening and the potential impact on jobs and investment due to the current stalemate.

US consumers and importers are already paying a price for trade tensions between the United States and China. They are bearing almost entirely the tariff revenue collected at the US border. Escalation is also likely to affect business sentiment and investment.

Tariffs on European imports carry an important additional impact for the US economy, due to deep transatlantic economic integration. European companies in the United States are the largest source of on-shored jobs in the United States, directly employing 4.6 million US workers in 2017. Tariff escalation, and resulting retaliation, will put at risk many of these jobs, as well as significant output and exports.

US exports and jobs can increase if the United States and the EU eliminate current tariffs on industrial goods and reduce the compliance costs of exporting across the Atlantic. European Commissioner for Trade Cecilia Malmström has stated that the EU stands ready to start negotiations towards formal agreements on these two issues.

How the United States benefits from the integrated transatlantic economy

Exports by US-based affiliates of European companies amounted to $192 billion in 2016 (13 percent of US total exports) with dense transatlantic value chains generating value added in the United States, as illustrated by the fact that 60 percent of US imports from the EU consisted of intra-firm trade in 2016.

European investment is broadly spread across the United States. It was the largest source of greenfield investment projects in more than thirty US states during the ten years until October 2018. Europe is the top export destination for forty-five out of fifty US states. Jobs supported by European investment are spread across both large and small states (over 1 million workers employed in California, Texas, and New York, and more than 200,000 in Pennsylvania, 160,000 in Michigan, and 158,000 in Ohio in 2016).

Eliminating industrial duties on both sides of the Atlantic, as agreed by Trump and Juncker last July, could further increase US exports of industrial products to the EU by 9 percent, or €26.2 billion, in the next fifteen years. The benefits would be much higher in some industries. US exports of motor vehicles and parts could rise by 46 percent, chemicals, and pharmaceuticals by 15 percent, and machinery and transport equipment by more than 9 percent.

Besides tariff removal, regulatory cooperation could further reduce the costs of transatlantic trade. For example, automobiles and auto parts exported from the United States into the EU, and vice versa, currently must pass a compliance test for the safety standards of the importing country. A conformity assessment agreement would allow EU and US companies to have their products exported to the other market certified in the territory where they are based.

Even more important is the potential for upstream cooperation to align new regulations in innovative product markets like additive manufacturing, industrial robotics, or technical textiles. Consistent EU-US regulations could create a transatlantic market and give advantage to US and EU firms in the global competitive landscape. The scope of the EU member states’ negotiation mandate to the European Commission includes this potentially important aspect as well.

The US administration is nevertheless reluctant to start negotiations because it favors extending the scope to include trade in agricultural products, but is unwilling to address protectionist practices such as Buy America or the maritime sector, which are European priorities, and has withdrawn from the Paris Agreement on climate change. Europeans have hence stood by the two presidents’ agreement and pursued a more limited agreement covering the elimination of tariffs on industrial products only. A renewed effort to start negotiations with a win-win perspective would bring clear benefits for the United States, as well as for the EU.