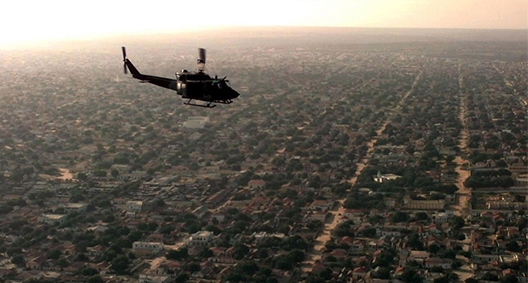 This past weekend, twenty years to the day after the conclusion of the Battle of Mogadishu, the deadly firefight dramatized in Black Hawk Down that left eighteen US military personnel dead and some six dozen others wounded (Pakistani and Malaysian units with the United Nations peacekeeping force also suffered casualties as they tried to relieve the embattled Americans)—to say nothing of hundreds, if not thousands, of Somali militiamen and civilians slain—and helped push the United States to withdraw from the African country, leaving it a haven for warlords and extremist groups, Navy SEALs returned in search of a leader of the al-Qaeda-linked militant group al-Shabaab, reportedly Mohammed Abdikadir Mohammed, aka Ikrima, a Kenyan national who was in charge of its foreign recruits and who was a close protégé of the organizers of the 1998 bombings of the US embassies in Nairobi and Dar es Salaam as well as the 2002 attacks on an Israeli hotel and airline in Mombasa, Kenya.

Unlike the near-simultaneous operation in Tripoli, Libya, by the US Army’s elite Delta Force, which captured Nazih Abd al-Hamed al-Ruqai, aka Anas al-Libi, an al-Qaeda leader also linked to the embassy bombings, the raid on the southern Somali coastal town of Barawe was aborted before it could achieve its goal after al-Shabaab fighters put up resistance. The actions over the weekend nevertheless point both to a shift in US counterterrorism strategy as well as to some of the limits which America still faces in pursuing its objectives in Africa.

First, Africa is increasingly emerging, alongside Afghanistan/Pakistan and Yemen, as a major hub for jihadists and other militant Islamists. As I pointed out nearly two years ago, the biggest news story out of Africa is how high commodity prices, combined with wise choices made by African leaders and peoples regarding economic reform, the rule of law, as well as the use of new technologies—all of which encouraged significant investment in their economies—has created a veritable boom which has lifted millions out of poverty. But, the progress is threatened by the spread of violent extremism by Islamist groups across the continent and the increasing links between the various militant organizations. During his tenure as head of the US Africa Command (AFRICOM), General Carter F. Ham, who retired earlier this year, repeatedly warned “if left unaddressed, you could have a network that ranges from East Africa through the center” and into the Sahel. The forced closure in August of eight US embassies in Africa, including four in Sub-Saharan Africa, because of heightened terrorist activity and last month’s attack by on a Nairobi shopping mall by al-Shabaab indicate the deadly seriousness of the threat.

Second, while the twin operations indicate a more diffuse threat, they may also hint at an evolution in the Obama administration’s approach to the fight against terrorist networks and a possible move away from the drone strikes which it has used—overused, according to critics, who cite how militants exploit popular resentment of the attacks to attract recruits—to lethal effect in the remote tribal areas of Pakistan and Yemen. As the president acknowledged in a speech at the National Defense University in May, “To say a military tactic is legal, or even effective, is not to say it is wise or moral in every instance.” Tellingly, neither of two operations on Saturday appears to have involved armed drones. In the case of the raid in Somalia, it is noteworthy that when the SEAL Team Six met resistance, an airstrike to simply level the militants’ compound was not ordered, presumably because the move would have put noncombatants in danger.

Third, despite the hundreds of millions, if not billions, of dollars that the US has poured into building up what are supposed to be capable and reliable local government partners in militant safe havens like Libya and Somalia, the results have been desultory at best. Officials of the weak Libyan regime have been at pains to distance themselves from taint of complicity in the seizure of Anas al-Libi, while the current so-called government of Somalia, in office for little over a year after following its election, as I chronicled at the time, by a parliament made up of members who bought their seats for upwards of $15,000, is, if one puts the best spin on it, the municipal authority of Mogadishu—and that much only because of the protection afforded to its leadership by more than 12,000 African Union troops deployed around the onetime capital. For the foreseeable future, the United States will have to rely on its own forces and those of such allies, European and African, willing and able to act against threats to common security coming from the continent’s “ungoverned spaces.”

Fourth, just as the attempt to capture warlord Mohamed Farrah Aidid and his top lieutenants in October 1993 ended in catastrophe due to inadequate intelligence about the enemy that the Army Rangers and Delta Force were sent in after, so too the SEALs in Barawe appear to have encountered unexpectedly stiff resistance and were forced to withdraw to avoid inflicting casualties on the civilian population. While any number of factors may have influenced the outcome of the operation, there is no dispute that US diplomatic, military, and intelligence resources for much of Africa, especially south of the Sahara, remain at levels far below where they should be given the burgeoning geostrategic importance of the region in terms of politics, economics, and security. Shortsighted proposals being bandied about inside the Washington Beltway to divide AFRICOM’s area of responsibility between the US European and Central Commands in order to achieve fairly modest budget savings will do little to bridge the serious deficit the American forces in Africa face, both in terms of sustained long-term relationships with their counterparts and institutional knowledge of the strategic landscape and operational space.

Fifth, while no one denies the right—indeed, the duty—of US officials to take action against terrorists, especially where local authorities like those in Tripoli or Mogadishu lack either the means or the will to do so, it is one thing to contain or even neutralize a threat and an entirely different matter to try to pick winners and losers. The failure of the intervention in Somalia in the 1990s was not the want of international approbation—both Presidents George H.W. Bush and Bill Clinton were backed by multiple UN Security Council resolutions—but the failure to consider that the Somalis, having overthrown the brutal Siad Barre dictatorship, the last entity that can reasonably claim to have been a government of Somalia, might be less than enthralled that the global community wanted to install a new central government. In fact, Somalis have resisted no fewer than fifteen attempts to impose a single government on them since 1991 and the current effort is unlikely to result in a different outcome, the recent pressures from Washington, London, and other major capitals for them to buckle under the rulers anointed for them having the opposite effect. Moreover, it not clear that having a recognized, but otherwise ineffective, government sitting in Mogadishu is at all in the interests of the United States, not least in the counterterrorism effort. In fact, a case can be made that the ambiguity that persisted before the decision in January to recognize the latest government entity gave the US greater strategic flexibility and operational freedom of action.

The United States and its allies have undoubtedly come a long way since the Battle of Mogadishu two decades ago, but, as with many things in that part of the world where, notwithstanding the tremendous advances made, there is more than a trace of plus ça change, plus c’est la même chose. Hence, one does well to tread carefully, especially if one is contemplating a return journey.