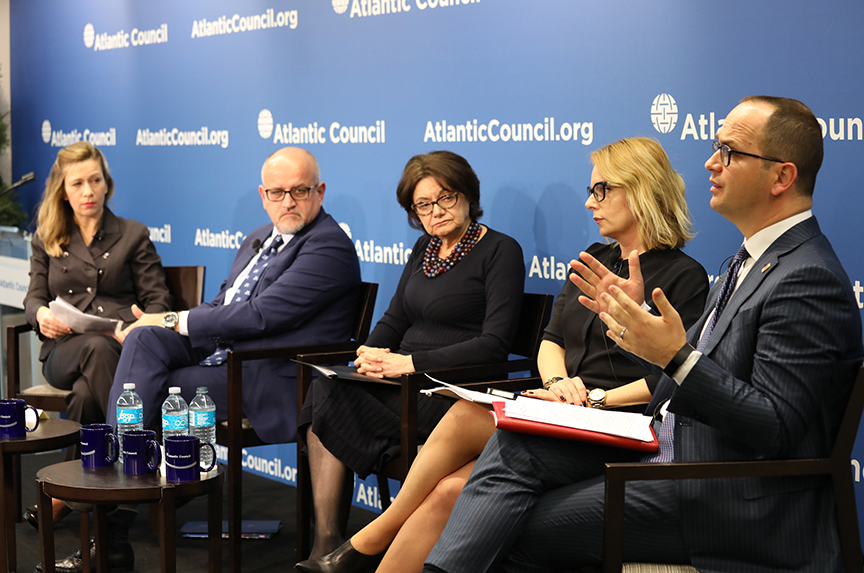 Balkan officials on November 29 made a pitch for deeper US and European Union (EU) engagement with the region, noting that its stability is critical for a peaceful Europe.

“Without a stable Balkans, there is no stable Europe,” said Srdjan Darmanović, Montenegro’s foreign minister.

Albania’s foreign minister, Ditmir Bushati, highlighted US Secretary of State Rex Tillerson’s recent remark that Europe should write the next chapter of its history in its own words. He said: “I hope this is instigating more solidarity within the European Union, but what we learned from the last twenty-five years is that American presence in our neighborhood, in Europe, is indispensable.”

Darmanović and Bushati spoke at a daylong conference hosted by the Atlantic Council—“A Coming Storm? Shaping a Balkan Future in an Era of Uncertainty”—in Washington.

US President Donald J. Trump’s administration has placed an emphasis on its relationship with the Western Balkans. This was apparent from US Vice President Mike Pence’s trip to the region in August during which he told the leaders of eight Balkan nations “the future of the Western Balkans is in the West.”

The EU, meanwhile, has been forced to recalibrate its priorities in the face of political and economic challenges within the Union, the United Kingdom’s plan to leave, acts of terrorism, an influx of migrants, and hybrid threats from Russia.

Darmanović cautioned that neglect of the Balkans could make this situation “irreparably worse.”

Montenegro became the latest—the twenty-ninth—nation to join NATO in June of 2017. Darmanović said that the EU and NATO must leave the door open for further enlargement. “It would be devastating to shut the door of the EU and NATO,” he added.

However, trends in the Western Balkans have been far from positive. The region has become mired in a democratic backsliding and corruption—a situation that Russia, Turkey, and wealthy Arab Gulf states have exploited to extend their influence.

US Sen. Jeanne Shaheen (D-NH) said it is up to the leaders of the Balkan states to “launch the region forward.”

“Leaders and citizens alike must redouble efforts to prioritize the future and not spend time rehashing the past,” she said.

“Every opportunity awaits you, NATO and EU membership await you, but old rivalries must be replaced with reform,” she said in a message to those leaders.

Darmanović said it is time for leaders in the region to show a commitment to reforms, but that the EU and NATO must also keep their doors open.

Bushati contended that reforms are essential regardless of whether the countries end up becoming EU or NATO members.

Rosemary di Carlo, president of the National Committee on American Foreign Policy, said the United States and the EU need a closer relationship on the Western Balkans, EU and NATO aspirants need a realistic path that keeps the region engaged, and the EU and the United States need to do a better job of highlighting their engagement with the region.

“If we leave a vacuum, someone with less benevolent objectives will fill it,” she said.

Shaheen and US Sen. Roger Wicker (R-MS) have introduced the Balkan Economic Partnership Act in Congress aimed at energizing Balkan entrepreneurs and businesses. The bill would create an “enterprise fund” in Bosnia-Herzegovina to boost investments in small- and medium-sized corporations.

The senator suggested kick starting prosperity and growth by leveraging technology, diversifying energy sources, and building regional cohesion while tackling the problems of corruption, criminality, and violent religious and nationalist extremism in the Balkans.

“The whole region is traveling on the hard-fought road toward Euro-Atlantic integration,” said Shaheen. “This is why the United States and the EU will stand behind those nations.”

Shaheen said Congress’ commitment to the Balkans has only grown stronger in the wake of Russian meddling in the US presidential elections in 2016.

“As Congress, we are committed to seeing this region flourish,” she said.