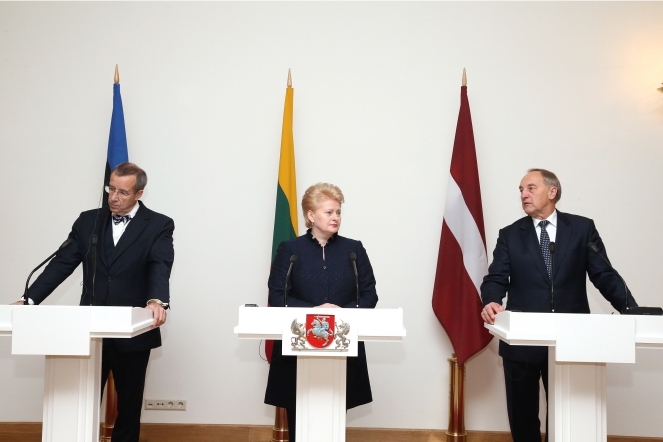 Having dinner with the Lithuanian Chief of Defense Staff Lieutenant General Pocius was a moving experience. Listening to the story of his family’s struggle for freedom left with me with the profound sense that every NATO and EU leader should visit the Baltic States at least once a year to remind themselves of the importance of both the Alliance and the Union.  Therefore, I am proposing two initiatives.

First, that NATO Exercise Baltic Spring, at which I had the honor to speak, should be renamed Exercise Baltic Spirit.  It is the Baltic spirit of freedom that really underpins the Alliance.  Second, that the three Baltic States join together to create an annual high-level security conference similar to the Halifax International Security Forum held in Canada that would involve heads of states and government and/or their appropriate ministers from across NATO and the EU.

This is a great part of the world.  Now, do not get me wrong.  I am a hard-bitten analyst and adviser and I know things…lots of things both good and bad.  However, what I love about Estonia, Latvia, and Lithuania (and they are very different) is their enduring spirit of optimism that sustained them during many dark years.  Speaking with young people here I am particularly motivated by their self-belief, their love of country, and their commitment to our shared institutions in which they play such a critical role.  As we western Europeans sink into an ever-deeper tar-laden pit of cynicism, a trip to this part of the world reminds us all of a simple truism.  It is not money in the case of the EU or military capabilities in the case of NATO that is the force that binds us, but a shared sense of political mission.

Of course, the big bear in the room in this part of Europe is always Russia.  One western European officer likened Russia’s relationship with the Baltic States as similar to that of a recently divorced partner who simply cannot let go.  My visit to Moscow a couple of weeks ago left me with an enduring sense that until Russia escapes from a history purely defined by its immense sacrifice in World War Two, it will continue to lurch between trying to rekindle lost relationships and then reacting aggressively when it realizes that those days are gone.  Estonia, Latvia, and Lithuania have made their respective sovereign choices and it is the freedom implicit in those choices which is and must be the litmus test for both the EU and NATO.

For me it seems such a lost opportunity that the good people of the Baltic States still live under a pall cast by history.  In the twenty-first century Russia still regularly tests their borders and Russia short-range mobile nuclear weapons are but a short distance away.  A long, long time ago such pointless strategic posturing would have angered me and even left me a little fearful. Today, it merely saddens me.  It is just so twentieth century, so boring and frankly a truly great power such as Russia is better than that.  For that reason I am proposing that Exercise Baltic Spring be renamed Exercise Baltic Spirit so that no-one ever miscalculates as to the will of both the Alliance and the Union to help preserve the freedoms so hard won by the people of this region.

That is why I am also re-iterating my proposal to Pocius that during its forthcoming EU presidency Lithuania host the first of a regular high-level series of security policy conferences and which I humbly asked him to convey to the Lithuanian President Dalia Grybauskaite.  This will come as a surprise to Madame President as prior to the Snow Meeting in January she gave me a bit of a ticking off about my views on the Euro-mess.  My views on the Euro-mess have not changed, Madame President, but you should never doubt either my belief in or resolve to support your freedom.

The conference could over time become a kind of security Davos to challenge Wehrkunde in Munich. Indeed, precisely because it would be held not in the now comfortable heartland of Europe but on one of the security fault-lines that still absurdly disfigure Europe’s peace landscape.  And, the EU should pay for it as for once my money would be spent on something useful.  Indeed, even though it is short notice the event would act as a precursor to the December EU summit on the future of the EU’s almost moribund Common Security and Defense Policy.  Critically, such a conference should also include partners and neighbours…most notably Russia.

The aim of the conference would be a twenty-first century pan-European security dialogue.  The title of the new conference?  Baltic Spirit of course!  Can I come too?