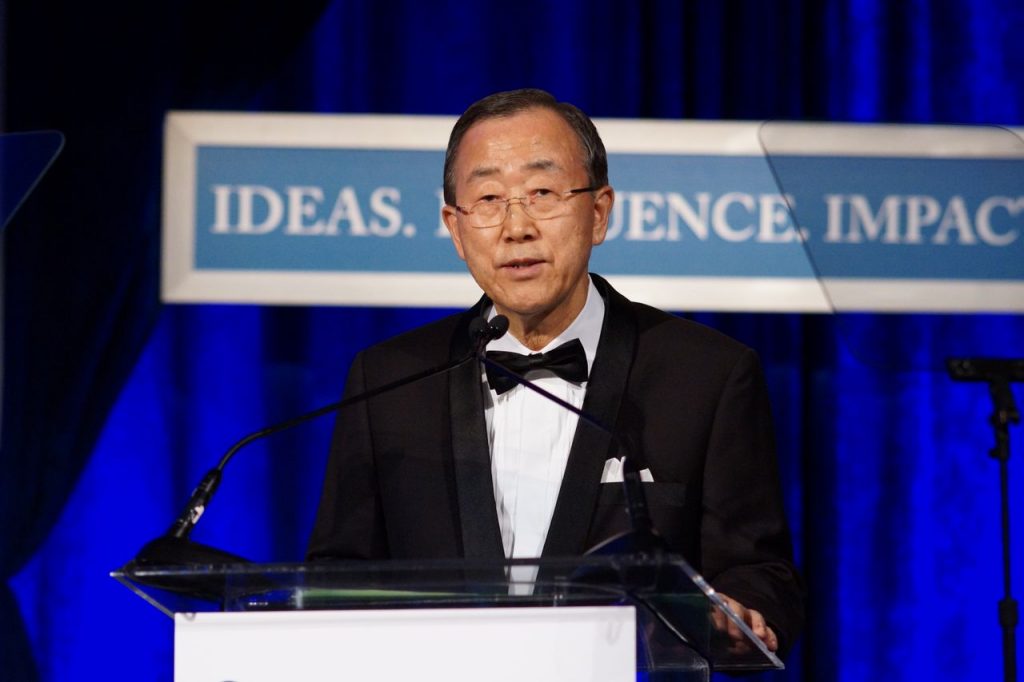 Ban Ki-moon declared that the world faces “an over-supply of problems,” a “deficit of solutions,” and a “deficit of leadership” and called on the United States and its transatlantic allies to provide it.
Speaking at the Atlantic Council Awards Dinner, where he received the award for Distinguished International Leadership, the UN secretary-general observed, “Seldom, if ever, have our principles and shared purpose been more relevant. Seldom, if ever, has this partnership been more vital than at this moment.” He added, “Everywhere we look, it seems, we see growing insecurity … growing injustice … growing social inequality.”

The rise in problems and difficulty in solving them are not unrelated, Ban believes: “Power is shifting. The old order is breaking down, and we do not yet know the shape of the new.”

He observed that, “Twenty years ago, at the end of the Cold War, the United States and its traditional allies could be counted on to lead the world through uncertainty and change.”
The rise of competing powers, the global financial crisis, and other factors make it much more difficult for the West to provide that sort of leadership, Ban admits, “And yet, tonight, I want to say clearly: we need that leadership.”

He was, of course, preaching to the choir. His vision might as well be the Atlantic Council mission statement. Indeed, he closed his remarks by declaring that “the Atlantic Council has always stood firm for justice and equal rights in larger freedom. Now is not the moment to lose heart … or change course.”

His prescription for said leadership was, however, perhaps a bit utopian: “A leadership dedicated to the common good — a global common good. A leadership of nations acting in concert — in truly global stewardship.”

Nations seldom act quite that selflessly. Certainly, Western policies toward many of the countries now undergoing the Arab Awakening were motivated by factors other than benevolence.

Still, Ban’s vision at least matches the values of the transatlantic community, even if they’re frequently honored in the breach: “We need to create a more humane world, a world of real solutions for ordinary people. A world of greater justice, with more robust and proactive protection of human rights and fundamental freedoms, with greater security and equity for all.”

“None of these ideas are alien to anyone here this evening. They are core American values—core transatlantic values—increasingly widely shared around the world. Our challenge is to continue to spread these principles — this universal code. And that takes leadership.”

A commitment to work together to achieve this shared vision and spread those shared values is a vital beginning but only a beginning. Achieving that vision requires action. That’s hard enough in the case of a Muammar Qaddafi, who’s almost universally despised; it’s thus far proven insurmountable in the face of Bashar al-Asad. And, of course, Russia and China, both of whom are Permanent Members of the UN Security Council, don’t even pretend to share these values.