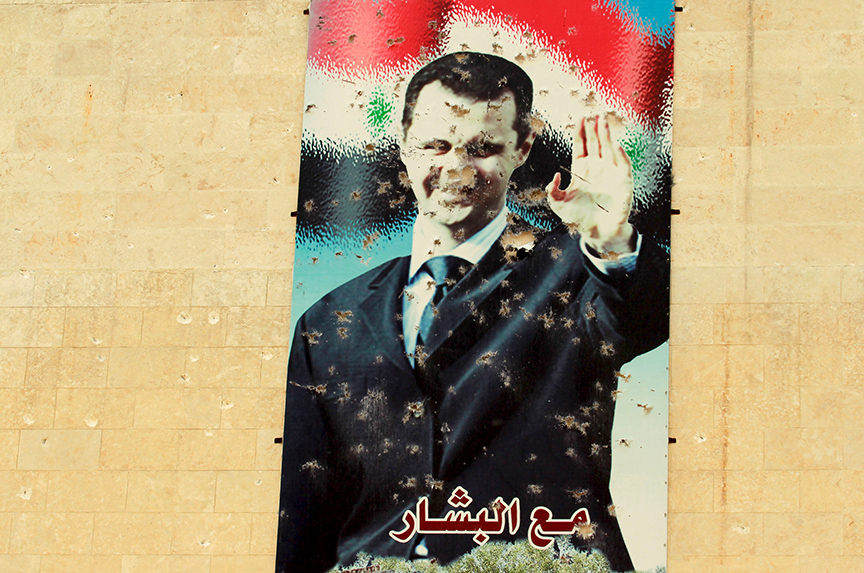 A bullet-riddled poster of Syrian leader Bashar al-Assad is seen on a wall in Idlib city after rebels took control of the area on March 28, 2015. The text on the poster reads in Arabic "With Bashar." (Reuters/Ammar Abdallah)

March 15 marks the seventh year of the Syrian uprising, which at its start resembled other protests across the Middle East known then as the Arab Spring.

A harsh crackdown by the Syrian regime transformed those student-led demonstrations into an armed uprising that has left hundreds of thousands dead, with some estimates as high as half a million. Millions more have been displaced from their homes and country.

However, there’s one notable survivor of the horrors of what’s become a multi-front civil and proxy war: Bashar al-Assad.

Several times it appeared as though Assad could lose his grip on power. The Syrian army’s brutal effort to squash protests-turned-armed-rebellion garnered worldwide condemnation. Its use of chemical weapons, the bombings of schools and hospitals, and targeting of civilians were actions that seemed, at one time or another, to all but guarantee that the Syrian leader’s days were numbered.

In 2012, then US President Barack Obama drew a line in the sand regarding the Assad regime’s use of chemical weapons, a line that the Syrian president appeared for a short while to respect, though ultimately crossed with no real consequence.

Overall, Assad has managed to escape serious consequence for all of his actions during the course of the civil war—if you discount the destruction of large swathes of the country. And with the Islamic State on the ropes in Syria, forced into small pockets a fraction of the size of their one-time self-proclaimed caliphate, Assad seems all but untouchable at this moment.

For a brief period, it seemed as though US President Donald J. Trump was intent on reining in Syrian leader. In early April 2017, a chemical weapons attack by the Assad regime in Idlib Province killed some seventy people including women and children. Trump called the attack an “affront to humanity” and soon thereafter ordered a missile strike on a Syrian airbase.

Since the US missile attack, which had little noticeable effect on the regime forces’ ability to carry out airstrikes and ground assaults on rebels and civilians alike, Assad has operated with relative impunity and continued assistance from noted allies Moscow and Tehran, along with Hezbollah, the armed Shi’ite group in Lebanon.

The initial rise of Assad was almost as unlikely as his survival over the last seven years of war.

A graduate of medical school who had not shown a proclivity for politics, Assad served as a doctor in the Syrian army before leaving for London in the early 1990s for more schooling in ophthalmology.

Then, a family tragedy changed the course of his life.

In 1994, Assad’s older brother, Bassel, was killed in a car accident. With the death of the heir apparent to then President Hafez al-Assad, the father began grooming Bashar for leadership. By all accounts, Bashar was quiet and introverted in comparison to his outgoing older brother.

When the Syrian president died in June 2000, Bashar was soon thereafter elected Syria’s next leader at the tender age of thirty-four. The country’s constitution had to be amended to make way for Bashar as it originally stated that the president must be at least forty years old.

At the end of 2000, Bashar married British-born Asma al-Assad. They have three children.

The neophyte president became head of the long-ruling, hardline Ba’athist Party and a populace that was just beginning to experiment with political discourse.

This so-called “Damascus Spring” was initially perceived, both at home and abroad, as a harbinger of a potential relaxing of some of the Ba’athist’s absolutist ways and, in particular, the country’s emergency laws.

Opposition groups hoped that a new president, particularly one who was not groomed from birth for leadership, would be open to hearing and incorporating their ideas and leaders into his fledgling government.

Though there were some signs of change—amnesties granted to long-incarcerated members of the Muslim Brotherhood, for example—hopes were dashed by the fall of 2001 with a government crackdown on the Damascus Spring activities.

Syria’s Sunni population, making up about three-quarters of the country, was once again subjected to an inflexible rule of law imposed by a government led by minority Alawite Shi’ites, whose ranks include the Assad family.

From 2001 until the start of the Arab Spring in 2011, Assad managed to maintain a firm grip by drawing closer to fellow Shi’ite groups like Hezbollah and the ruling clerics in Shi’ite-dominated Iran.

Both of those alliances, along with ties to Russian President Vladimir Putin and his “advisers” on the ground in Syria, have helped Assad weather the worst of the country’s civil war until now. And with no real repercussions for the use of torturous warfare against the innocent and his enemies, Assad has emerged from the worst of the Syrian civil war perhaps even stronger.

Carmen Gentile is a freelance journalist and author of the book “Blindsided by the Taliban.” Follow him on Twitter @CarmenGentile.