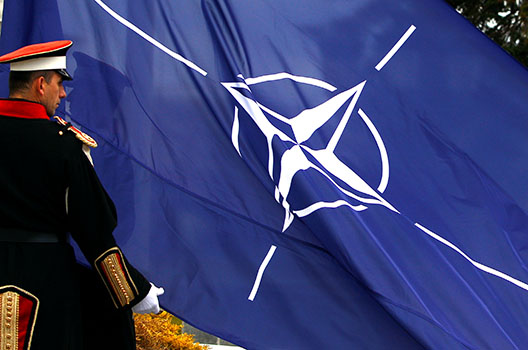 Despite a year of public criticism and uncertainty on both sides of the Atlantic, NATO Secretary General Jens Stoltenberg hailed 2018 as a year of tremendous progress for the transatlantic Alliance. Launching his Annual Report for 2018 on March 14, Stoltenberg said allies are “doing a lot more together — in more ways and in more places — than ever before.”

Throughout 2018, NATO allies and their partners took steps to bolster the Alliance’s capabilities, strengthen its defense, and respond to changing security threats and technologies. Here is a quick look at what the Alliance accomplished in 2018, according to Stoltenberg’s new report.

Perhaps no NATO topic was more discussed in 2018 than the issue of defense spending. US President Donald J. Trump pushed allies hard throughout the year to meet the 2 percent of gross domestic spending goal set by the Alliance at the 2014 Wales Summit. Trump even went so far as to imply that the United States could withdraw from NATO should members fail to meet the pledge.

But beyond these headlines, NATO members took real steps toward sharing more of the defense burden. The Annual Report explains that there are now seven allies who have reached the desired 2 percent goal (the United States, Greece, the United Kingdom, Estonia, Poland, Latvia, and Lithuania), up from only three in 2014. At Wales, allies agreed to reach the target by 2024. Across the board, annual spending from non-US NATO countries increased by $41 billion since 2016, including a 4 percent increase from 2017 to 2018 alone.

Allies are not only spending more, they are increasing investment in much-needed major military equipment, such as upgraded aircraft, tanks, and weapons systems. According to the report, “in 2018, twenty-five allies spent more in real terms on major equipment than they did in 2017.” Sixteen NATO members now meet the NATO goal of spending 20 percent of their defense budgets on major equipment.

As allies stepped up their contributions, NATO leaders continued efforts to bolster the Alliance’s capabilities and operations. A new Very High Readiness Joint Task Force, led by the Netherlands, Germany, and Norway, was certified in 2018 and is ready to help the Alliance rapidly respond to any crisis as early as this year. NATO members also formalized plans to boost their military readiness by endorsing the “Four Thirties Readiness Initiative,” which will aim to have thirty troop battalions, thirty combat ships, and thirty aircraft squadrons ready to respond to a crisis within thirty days’ notice.  The initiative aims to be completed by 2020.

At NATO’s summit in Brussels in July 2018, leaders updated the Alliance’s command structure, announcing the creation of two new Joint Force Commands with an additional 1,200 personnel from member states. The two new commands—which will become operational in 2019—will be based in Norfolk, Virginia, and Ulm, Germany, and will be focused on protecting sea lines of communication and rapid military mobility in Europe, respectively. NATO also moved into its new headquarters in Brussels, providing more capacity and state-of-the-art technology to coordinate Alliance activities.

NATO is also achieving progress on its new Air Command and Control System, which aims to “replace existing national systems—which are too often incompatible [with other allied systems]—with an overarching Alliance-wide network,” according to the Annual Report. The airbase in Poggio Renatico, Italy, became the first operational system in this new framework in 2018, with more to follow in the next few years.

Being ready for a potential crisis is about more than spending money on new equipment and bases, though. One of NATO’s primary benefits is providing a forum for allied military personnel to train and prepare for conflicts together, increasing battle-readiness and providing valuable coordination experience. In 2018, NATO conducted 104 exercises, such as the Unified Vision 18 mission, which focused on joint intelligence and surveillance activities. The largest exercise was Trident Juncture 198 in Norway, which included “50,000 personnel, 250 aircraft, 65 ships, and 10,000 vehicles from twenty-nine allies, Finland, and Sweden,” according to the Annual Report, and was the “largest Article 5 military exercise since the end of the Cold War.”

NATO officials also have adopted a new Women, Peace, and Security action plan, to incorporate important gender perspectives on the Alliance’s security and peacekeeping operations, focusing on “three guiding principles: integration, inclusiveness, and integrity,” according to the Annual Report.

NATO took tangible steps to protect its most vulnerable member states in 2018. As allies along the eastern flank remain concerned about growing aggression from Moscow and potential spillover from the conflict in Ukraine, NATO bolstered its forces to protect these countries.

A new headquarters is operational for the Multinational Division North-East in Elblag, Poland, providing oversight of NATO’s forces in the region and ensuring clear command and communications in case of a crisis. The Alliance also increased its naval presence in the Black Sea to protect its members there, increasing the amount of time naval forces sailed into the Sea from eighty days to 120 days in 2018.

NATO also solidified its posture to the south, creating a new hub for operations at Allied Joint Force Command Naples. The new center for operations is now staffed by seventy personnel from twenty different member states. The center will organize the Alliance’s operations in the Mediterranean, including counterterrorism and counterpiracy operations, as well as general maritime and air surveillance and patrols. Air policing support was also extended to new member Montenegro in 2018, joining the Baltic states, Slovenia, Iceland, and Albania as a beneficiary of NATO joint aircraft patrols.

NATO also spent 2018 adapting to the new threats of the 21st century. As Western militaries and societies deal with the challenges of cyberattacks and online disinformation, the Alliance is beginning to dedicate specific resources to help defend against these threats. NATO established a new Cyberspace Operations Centre in Mons, Belgium, in 2018 to oversee all NATO cyber operations and planning, and Alliance leaders agreed in July to create new Counter-Hybrid Support Teams to help member militaries and governments defend against cyberattacks.

In 2018, NATO reaffirmed its principle that all countries with strong commitments to democratic principles and free markets can become members of the Alliance. It formally offered membership to the newly-named Republic of North Macedonia after the successful conclusion of the Prepsa Agreement between North Macedonia and its neighbor Greece. NATO also announced that it was ready to receive Annual National Program updates from Bosnia and Herzegovina, a series of reports outlining the country’s progress towards the reforms necessary to make itself an enlargement candidate. Alliance leaders in July reaffirmed their support for the eventual membership for Georgia and Ukraine.

Despite continued Russian violations of territorial sovereignty and international arms agreements, NATO leaders remained committed to avoiding conflict with Moscow in 2018. Two important meetings of the NATO-Russia Council took place in 2018, during which time NATO officials raised the issues of Russian non-compliance with the Intermediate-Range Nuclear Forces (INF) Treaty, Moscow’s illegal annexation of Crimea and invasion of Eastern Ukraine, and the use of disinformation and hybrid warfare. The Annual Report explained that NATO and Russian officials were in constant contact during the Trident Juncture and Vostok military exercises to ensure there was no unintentional escalation.

Alliance members also renewed their commitment to help support the governments of Iraq and Afghanistan. NATO countries increased their support for the Resolute Support Mission in Afghanistan, including 3,000 new trainers, and adding the United Arab Emirates and Qatar to their global coalition. In Iraq, NATO is now undertaking a new training mission to help Iraqi police and security services.

Image: An honor guard raises the NATO flag in front of the Macedonian government in Skopje, February 12, 2019. (REUTERS/Ognen Teofilovski)