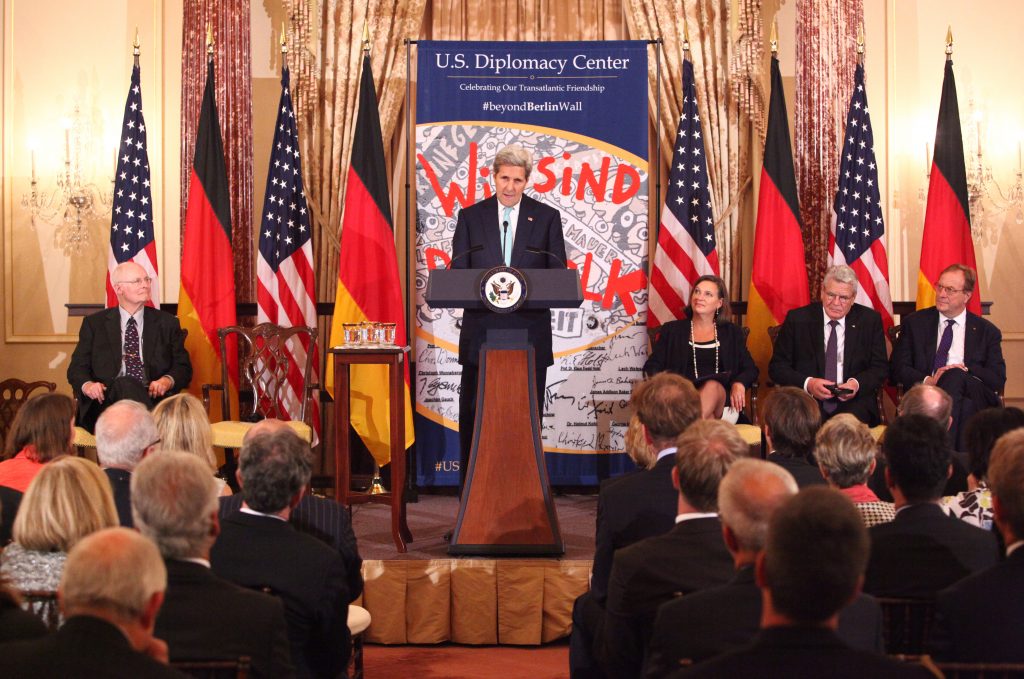 US Secretary of State John Kerry speaks at the commemoration of a section of the Berlin Wall at the State Department on October 7. He was joined at the ceremony by (from left) William Harrop, Chairman of the Diplomacy Center Foundation; Victoria Nuland, US Assistant Secretary of State for European and Eurasian Affairs; German President Joachim Gauck; and Atlantic Council President and CEO Frederick Kempe. The Atlantic Council gifted the panel through an agreement with the German company Verbundnetz Gas. It will be displayed in the US Diplomacy Center. (Atlantic Council/Victoria Langton)

Swapping stories about their experiences in an East Germany that was shut off from the West by the Berlin Wall, US Secretary of State John Kerry and German President Joachim Gauck on October 7 commemorated the arrival of a section of the barrier at the State Department in Washington.

The Atlantic Council provided this segment of the wall through an agreement with the German company Verbundnetz Gas. It will be displayed in the US Diplomacy Center, which is set to open in 2017.

Kerry described the section of the Berlin Wall as a “very tangible… and very large piece of history.”

“We recognize now, even more than we did in 1961, that the building of the Berlin Wall was both an act of hostility as well a humiliating admission of defeat,” he said.

“From ancient Rome to medieval China we know of civilizations erecting barriers to keep adversaries out, but never before had a government found it so necessary to brick their citizens in,” he added.

Kerry was a young boy when his father was posted to West Germany as a legal advisor to the US Ambassador James Conant. He recalled once riding his bicycle through a checkpoint into East Berlin. “I found it very foreboding, the difference between the East and the West,” he said. “I had the choice of going back [to West Germany]. A lot of people obviously didn’t have that choice and many people lost their lives trying to exercise it later on.”

Gauck was one of those who grew up behind the Iron Curtain in East Germany. His father was a prisoner in a Soviet gulag and he was referred to in East German secret police files as “’an incorrigible anti-communist.’ The highest praise indeed,” said Kerry.

“Your presence brings home to us the fact that the Cold War was not some sort of a geopolitical game. It was terrible human tragedy,” Kerry told Gauck.

The section of the wall presented by the Atlantic Council has been signed by several prominent personalities who played important roles in ending the Cold War and cementing the transatlantic relationship.

Gauck recalled how as a young boy he lived in an age in which popular uprisings were routinely crushed across Eastern Europe. But, he added, “Where liberty reigns, walls will be brought down.”

The German President expressed gratitude to those Americans who “in the darkest hours of German history stood by us when we fought Nazi Germany … and realized, welcomed, and supported the desire expressed by the German people to live in one country.”

Atlantic Council President and CEO Frederick Kempe, the son of German immigrants, said that in his view there is “no more appropriate centerpiece for the US Diplomacy Center” than the section of the Berlin Wall.

“There is no better example of how principled and consistent diplomacy backed by military strength and working alongside our allies for decades can produce historic outcomes,” said Kempe.

Kempe said the story of the Berlin Wall is “as much an inspiration for our future common endeavors as it is a history lesson.”

“If we don’t get our act together across the Atlantic with our global friends and allies then assuredly less benevolent actors or chaos will fill the void. Witness Syria. Witness Ukraine,” he added.

Victoria Nuland, US Assistant Secretary of State for European and Eurasian Affairs, and William Harrop, Chairman of the Diplomacy Center Foundation, also attended the event.

Artist Michael Fischer-Art has decorated the section of the wall with his art.

“The wall, for three decades, and perhaps for all of history will remain as the iconic image of what unfree systems can impose when free leaders fail to resist,” Kempe said adding a cautionary note that is just as relevant today as it was during the Cold War.