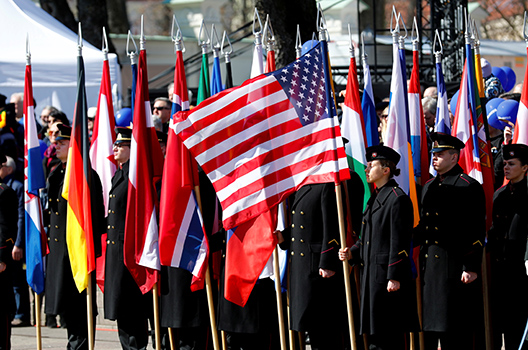 For generations, NATO has defended against conventional enemies, promising its member countries solidarity in the face of adversity. That promise survived its first major test in 2001, but in a globalizing and technologically changing world, NATO risks being left behind as a 20th century institution holding on to an old political reality. To preserve its foundational strength, NATO should transition from an institution hinged solely on the promise of collective defense to a beacon of liberal thought leadership, emphasizing the critical roles for cooperation and diplomacy in preserving international security. Taking a two-pronged approach that emphasizes both high-level dialogue and on-the-ground engagement will best position NATO to take on this new mandate, addressing emerging issues and drawing in partners beyond its traditional Atlantic alliance.

As the world moves further from conventional warfare, the ensuing rush to embrace space-based warfare, drone swarms, and nation-state cyberattacks will generate mismatched expectations and execution, with rival states and watchdog groups leveling criticisms and accusations of illegality as governments struggle to parse out the limits of these new technologies.

As a defense-oriented institution with a legacy of democratic values, NATO is best poised to lead the discussion on new forms of warfare, issuing international guidelines on how to employ new tactics and weapons without compromising human rights or unduly burdening state sovereignty.

Convening high-level discussion forums and working groups is somewhat new for NATO, an institution that is more accustomed to the front lines than to the board room. But developing new norms for the battlefields of tomorrow is an essential function of NATO’s future, positioning the institution for continued relevance through commentary on cutting edge issues while also providing a forum to engage with regions beyond Europe. Giving African, Asian, Latin American, and Eastern European countries a seat at the table and a voice in the decisions diversifies the conversations, while ensuring that non-NATO member states have a buy-in on the conclusions coming out of high-level forums, and, therefore, an incentive to adopt new guidelines.

While dialogue is important, it is on-the-ground commitments that will truly demonstrate the strength of NATO as a thought leader. Macro-level engagements with nation states could build upon existing joint training programs to enable NATO to move beyond its current sphere of influence.

Launching Arctic war games in partnership with Russia, for example, would not only pilot advanced military tactics in a harsh climate, but could also begin to repair one of NATO’s frostiest relationships.

There are numerous opportunities for this type of engagement, which could include an African Union partnership for election monitoring, an Arab-Israeli counterterrorism mission, or anti-piracy patrols in Southeast Asia. By pushing itself beyond the Atlantic Ocean, NATO has the power to foster collaborative relationships among historic adversaries and devise creative solutions to thorny international security issues.

To truly engage with citizens of its electorates, however, NATO should also look toward micro-level engagement with local communities. While such tactics are virtually unprecedented within the Alliance, they have enjoyed tremendous success elsewhere.

With one of the largest Somali populations outside of Africa, the Twin Cities in Minnesota have historically been a recruiting hotbed for Islamist terror groups. But countering violent extremism programs implemented by the community, and in particular by the police force, have been tremendously successful in reducing the impact of terrorist recruitment campaigns and have driven young people to seek help from community and religious leaders. The Twin Cities’ program could serve as a model for NATO, driving home the point that national or regional solutions are not always the most effective.

On issues like homegrown extremism that focus on specific religious, ethnic, or tribal groups in localized geographic areas, NATO should work directly with communities to improve local capacities. Piloting municipal-level programs to improve risk awareness and mitigation strategies will create a forum for NATO to interact directly with its electorate while moving toward a future model in which the Alliance can concentrate on actively preventing security crises as well as responding to them.

In its seventy years, NATO has played an instrumental role in averting nuclear war, normalizing relations between Western and Eastern Europe, and advancing the global fight against terrorism. By actively promoting dialogue and on-the-ground engagement around emerging threats, it can continue to expand its influence throughout the world as a leader not only in collective defense, but also in cooperative defense.

Kathryn Urban is a research assistant at C&M International.

This article is part of a series on the future of NATO.