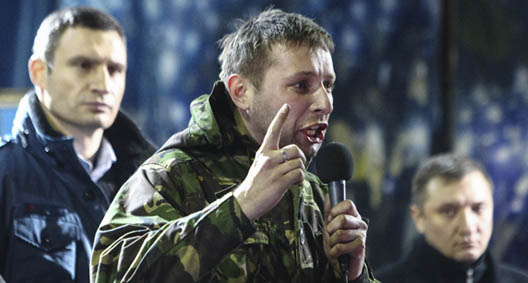 An Unlikely ‘Hero’ Voices Frustrations and Optimism of the Maidan

Three weeks after many Ukrainians acclaimed Volodymyr Parasiuk a hero for helping to oust his country’s corrupt president, the 26-year-old computer enthusiast seems to reflect two changes that might eventually help a more democratic and stable Ukraine emerge from its crisis.

The four-month mass uprising on Kyiv’s main square, the Maidan, has built a bridge across the country’s east-west divide, Parasiuk says, and Russia’s armed occupation of Crimea has welded a new degree of national unity. Independent opinion polls appear to buttress such views, the Atlantic Council’s Adrian Karatnycky says.

Parasiuk says he is no hero. But he became a symbol of the Maidan movement February 21, when he seized the microphone and the moment from political party leaders who had negotiated a deal to reduce the powers and the tenure of President Viktor Yanukovych. Parasiuk had spent weeks on the Maidan demonstrating, had helped lead one of several “self-defense units” that had fought Yanukovych’s riot police, and had seen protesters shot dead by police snipers.

Standing beside the politicians, Parasiuk shouted his veto of their deal. “No Yanukovych is going to be president for a whole year!,” he cried hoarsely to the crowd. “Tomorrow, by 10:00, he must be gone!” With the open coffins of protesters killed by police borne amid the crowd, the Maidan roared its assent. Yanukovych, his political alliances and his police guard already disintegrating, fled Kyiv that night. (See the video of Parasiuk’s passionate appeal, below.)

One of the three opposition party leaders whom Parasiuk criticized, Arseniy Yatsenyuk, now heads the interim government struggling with the Russian invasion and the state’s near-bankruptcy. Parasiuk says Maidan activists feel Yatsenyuk has accomplished too little in his first two weeks in office, but support his government against the Russian threat.

“Now we have a very bad situation in Ukraine, because we understand we could very well lose our motherland,” Parasiuk said in an interview via Skype from an office he uses beside the Maidan. “This is what has united us. … At the Maidan, people are saying to the government that, ‘please, we are here for you, we want to help’” confront the Russian assault, he said.

Still, “there is a certain mistrust that [the government] is not taking steps . . . of any importance,” and is appointing too many officials from the Yanukovych regime, he said. “The politicians are not informing the community about what they are doing, not communicating with the Maidan.”

The Maidan movement, which involved hundreds of thousands of Ukrainians since it erupted in late November, has wrought some positive changes in Ukraine’s political culture, Parasiuk says. He and others from the Ukrainian-speaking west found allies from the Russian-speaking east in their opposition to Yanukovych. “We were facing a common enemy  . . .  [who] put us all together in the same boat,” he said. “We understand that . . . it’s time for us to break free of the labels that have been attached to us, east and west.” The Maidan has been an engine for the building of internet social networks that are connecting eastern and western Ukrainians in new ways, he said.

The moderate political mood is shown by voter surveys for the presidential election to be held in ten weeks, Atlantic Council Senior Fellow Adrian Karatnycky writes in today’s Washington Post. The extremists of the west (which are hardline right-wing groups) are getting support from just 6 percent of likely voters in a recent independent poll, while extremists of the east (represented by a pro-Russian communist party) are polling 7 percent. A full 76 percent back one or another moderate candidate.

Parasiuk and other Ukrainians say the country still could slip into the political infighting that ultimately ruined Ukrainians’ previous campaign at the Maidan to rescue their country’s democracy. That was the 2004 Orange Revolution, which erupted over an attempt by Yanukovych to rig a presidential election.

“We already feel that 2004 is being repeated now, but there is one difference, and that is the Maidan,” said Parasiuk. Despite significant financial and organizational problems in running the demonstrators’ encampment and its daily, open political forum, “people are intending to stay right here” to push Ukraine’s parties for political change deeper than that won so far, he said. “Civic … organizations are being formed that want to take part in the shaping of policy. Europe and the West should pay attention not only to Crimea, but also to the fact that we are standing here for certain values, and now we are being cheated out of any participation or influence” under the new government.

The Maidan is pressing “not just for presidential elections in May, but for parliamentary elections as well. People who have been born as activists on the Maidan need to be present there, and the power structures need to be renewed,” Parasiuk said. “Then we will be able to put our country in order.”

With Russian President Vladimir Putin threatening a catastrophic war, and Ukraine nearly unable to pay its debts, the democratizing and moderating contributions of the Maidan will be insufficient to assure either renewal or order in the country that eventually emerges from these crises. But they will be necessary.

James Rupert is managing editor at The Atlantic Council.