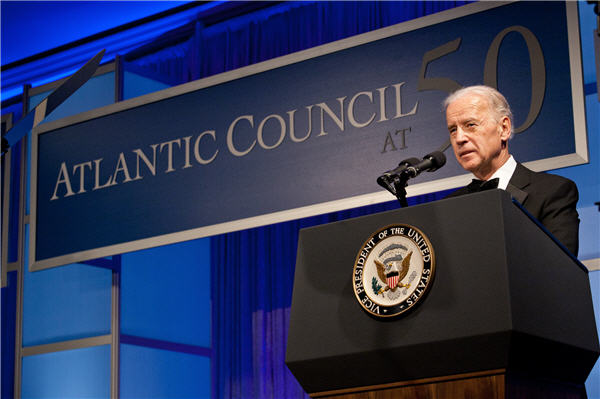 In his first public remarks since the announcement of Osama bin Laden’s death, Vice President Joe Biden divulged that “as many as 16 members of Congress that were briefed on it, not a single solitary thing leaked.”

Delivering the keynote address at the Atlantic Council’s annual awards dinner, Biden praised “Those brave professionals who tracked and killed Osama bin Laden, it was just actually breathtaking.” He termed it “a staggering undertaking” and proclaimed that “no one else other than the American group of military warriors who could do it.” The vice president declared himself in “absolute awe” of the “capacity and dedication of the entire team – both the intelligence community, the CIA, the SEALs. It was extraordinary.”

Referring to the night’s honoree for Distinguished Artistic Leadership, Biden quipped, “Placido Domingo is the only man who could sing their praises.”

He was also proud of his former colleagues on Capitol Hill. “What was even more extraordinary was — and I’m sure former administration officials would appreciate this more than anyone — there was such an absolute overwhelming desire to accomplish this mission that although for over several months we were in the process of planning it, and there were as many as 16 members of Congress that were briefed on it, not a single solitary thing leaked.”

“I think one clear message has gone out to the world,” he said. “There’s no place to hide. There’s no place you can hide.  If the United States decides from one administration to the next that we will, in fact, reach a goal, we reach the goal.  We are determined, and we will relentlessly, without any hesitation follow on that commitment, Democrat or Republican.”

While so much of the discussion of this mission among the chattering classes has kept to the standard partisan script, with Republicans and Democrats fighting over who should get the credit for this, the vice president’s sentiment that this bigger than that seems quite genuine. A senior administration official I talked to during the pre-dinner reception said that this was achievement was years in the making and that the Bush administration and everyone from “liberals to realists to neocons” deserve enormous credit for paving the way. Knowing this individual’s deep misgivings toward the previous administration’s policies and his sharp disdain for neoconservative ideals in particular, this was high praise indeed.

The result of this team effort, Biden declared, is that “The world is a safer place today not only for the American people, but for all people.”