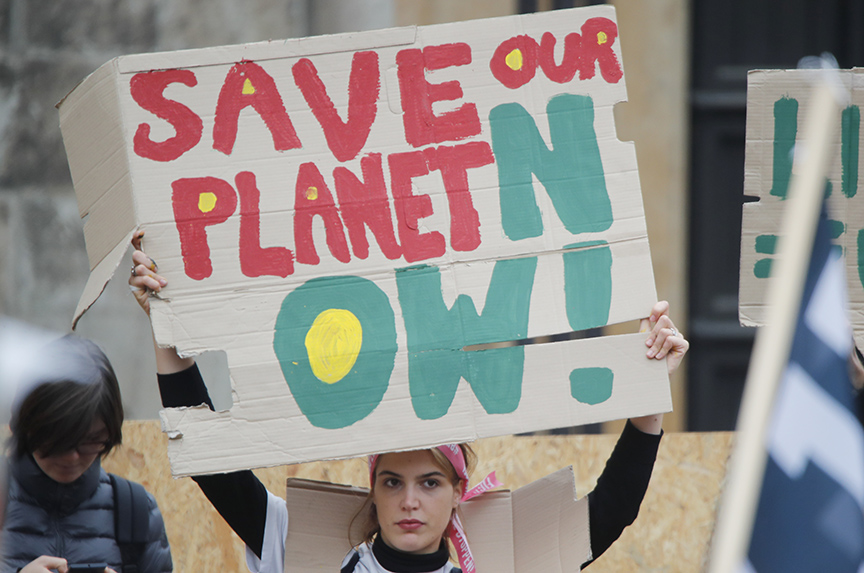 Protesters participated in an anti-coal demonstration two days before the start of the COP23 UN Climate Change Conference hosted by Fiji, but held in Bonn, Germany, on November 4. (Reuters/Wolfgang Rattay)

Both the international climate talks this week in the former West German capital of Bonn, and the negotiations over the future composition of the German government continuing this week in Berlin, will focus on the country’s approach to climate policy. While all eyes may be on Bonn, the discussions in Berlin provide a preview, and perhaps a microcosm, of the challenges ahead for global climate efforts.

The path forward for climate action, the main focus of the twenty-third Conference of the Parties (COP23), is also proving to be a key sticking point in the ongoing negotiations to form a new German governing coalition following elections in September. The discussions in both cities raise questions as to Germany’s role as a global leader in climate policy when strong leadership is needed most.

Germany’s Christian Democrats (CDU), along with their sister party, the Christian Social Union (CSU) and potential coalition partners the Green Party as well as the Liberal Democratic Party (FDP), began coalition negotiations in late October. Since then, they have been holding exploratory talks on climate, which have reportedly been “heated,” primarily due to disagreements over Germany’s emissions-reduction targets. This has been a surprise to observers more accustomed to Germany’s domestic support for the Energiewende, the national plan to shift to a low-carbon energy supply, which is generally touted by the German government (and others) as a model for energy transition.

While Germany is considered a global leader in climate action, alongside migration policy, climate action is proving to be a source of disagreement in German domestic politics. The contentious questions in Berlin regarding Germany’s climate policy are many of the same ones hanging over global climate negotiations in Bonn.

A major source of debate is the likelihood that Germany will fail to meet its 2020 national emissions reductions targets. While the three German political parties agree that the European Union (EU) climate targets—based on the Paris Agreement—are indisputable, there is less consensus on the role national targets should play. This raises questions of binding versus aspirational goals and targets, how to meet those targets, and to deal with failure.

The answers to these questions are crucial not just for Berlin, but also Bonn as the facilitative dialogues which Fiji, the host government of COP23, has renamed the “Talanoa dialogue,” commence. Under the Paris Agreement, this process activates the so-called “ratcheting” mechanism, requiring countries to take stock of progress in achieving their nationally determined contributions (NDCs) and increase ambition accordingly. Increasing ambition, measured by NDCs, is particularly important as the United Nations (UN)’s recently released Emissions Gap report found that current national pledges only account for a third of the reductions needed to remain below the target world temperature rise of two degrees Celsius. The lack of strong leadership in meeting climate targets from a well-positioned country like Germany could temper ambition at the exact moment when it is most crucial.

A second key question relevant to meeting both country-level and global ambitions is the role of fossil fuels in the energy—and particularly power sector—mix. This has proved a stumbling block in the German coalition talks, as the parties struggle to find agreements on the so-called coal exit. While the Greens have demanded a timeline and date for a coal phase out, the CDU has tried to avoid specifics while the FDP has left the question up to the European Emissions Trading System. The role of coal has taken on increased relevance in the German debate in the context of the ongoing nuclear phase out, which the government initiated following the 2011 Fukushima nuclear disaster in Japan.

The future of coal will also take center stage in Bonn, where thousands of demonstrators gathered over the weekend to protest Germany’s coal consumption, particularly as the US government plans to promote fossil fuels, including coal, as part an overall set of clean energy solutions. The difficulty in phasing out coal in Germany, Europe’s second largest coal producer and largest coal consumer, and US President Donald J. Trump’s support for coal and roll back of regulations like the Clean Power Plan underscore that the question of how to transition away from cheap (and often domestic sources) of energy in favor of cleaner power (and at what cost) remains unresolved—and politically fraught.

Also unresolved is the future of the transportation sector and its relationship to climate mitigation. Germany is a key stage upon which this question—and the future of the combustion engine—is playing out. Germany’s automotive sector employs 800,000 people and is the largest source of exports. For this reason, while the Greens have called for a ban on the combustion engine by 2030, the CDU and FDP have not been receptive. However, transitioning the transportation sector, particularly the automotive fleet, is key for global emissions reduction efforts, as nearly a quarter of global emissions comes from the transportation sector, which remains 95 percent reliant on petroleum-based fuels.

While many of these issues remain up in the air, one thing is for certain—as German leaders grapple with these issues in Berlin, world leaders will be doing the same in Bonn at the first COP conference since Trump took office. Any new German government should turn these domestic political debates into an opportunity to demonstrate not only that climate leadership starts at home, but real progress requires admitting and addressing shortcomings to translate commitments into concrete action. If a country known for coal and cars can form a governing coalition which successfully balances environmental interests and economic competitiveness, Germany just might live up to its reputation—and provide a durable model of climate leadership.

Ellen Scholl is an associate director at The Atlantic Council’s Global Energy Center, and worked on energy and climate issues as a Robert Bosch Fellow in Germany. Follow her on Twitter @EllenScholl.