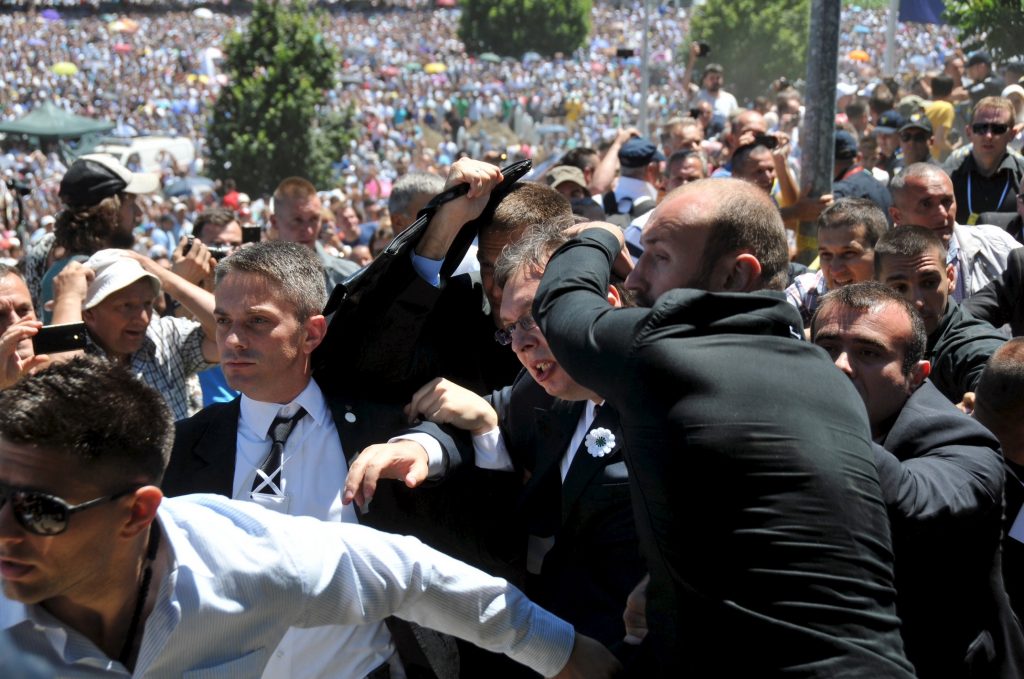 Bodyguards protect Serbian Prime Minister Aleksandar Vucic during unrest at a ceremony marking the 20th anniversary of the Srebrenica massacre in Potocari, near Srebrenica, Bosnia and Herzegovina, July 11. Vucic was forced to flee the ceremony when mourners hurled stones and bottles at him in what his government later described as an attempted assassination. (Reuters/Ivan Sebalj)

Bosnia-Herzegovina’s European orientation should not be taken for granted. While the European Union and Bosnia may want closer ties, growing tensions between Sarajevo and the subnational entity Republika Srpska, as well as enduring and pervasive corruption, pose serious challenges to Bosnia’s legitimacy. Safeguarding Bosnia’s European orientation will require Sarajevo and its transatlantic partners to curb Republika Srpska’s increasing nationalism while simultaneously pushing for reforms required for EU integration.

Republika Srpska President Milorad Dodik has exploited nationalist sentiment and separatist rhetoric to increase his hold on power. On June 11, Dodik refused to sign a package of reforms, spoiling Sarajevo’s access to EU funding and foiling its progress on European integration. Instead, Republika Srpska is pursuing its own set of reforms, leaving several state power companies under Dodik’s control. Following attacks on Serbian Prime Minister Aleksandar Vucic during commemorations of the 20th anniversary of the Srebrenica massacre July 11, Dodik claimed that alleged Bosniak war criminal Naser Oric was in Srebrenica in disguise. He also made inflammatory claims that Bosnian President Bakir Izetbegociv is seeking to abolish Republika Srpska and turn Bosnia-Herzegovina into an Islamist state.

Dodik is pursuing his own foreign policy, drafting an anti-NGO bill nicknamed “Putin’s Law” and negotiating a €700 million loan with Moscow. In recent months, Dodik has even grown as bold as to challenge the Bosnian state as a legitimate actor. On July 15, Republika Srpska’s national assembly voted to hold a referendum on the legitimacy of the Bosnian federal judicial system and the authority of the Office of the High Representative. Though vetoed, this maneuver demonstrates Dodik’s willingness to directly attack the pillars of the state. By actively spoiling efforts to reform, enflaming nationalist tensions, and pursuing its own international orientation, Republika Srpska’s leadership undermines the stability and the sustainability of Bosnia-Herzegovina as a whole.

Republika Srpska’s challenge comes at a time of profound dysfunctionality within the national government. Sarajevo lacks the focus and political will to meet Dodik’s challenge. Decreasing international interest, persistent corruption, and severe deficits have plagued the increasingly gridlocked state. Sarajevo’s attempts to enact a package of European Union reforms collapsed the ruling coalition of the subnational Federation of Bosnia-Herzegovina. While Federation parties are holding new coalition talks, it is likely that any new coalition will be more unmanageable and include smaller, more fringe parties. This confused political situation will impede efforts to reform Bosnia. Additionally, Sarajevo’s failure to implement earlier reforms has prevented the Ministry of Finance from reaching a new funding deal with the International Monetary Fund, the World Bank, and other financiers. With huge deficits and pervasive corruption, Bosnia is struggling to avoid outright collapse.

Safeguarding Bosnian sustainability requires the attention of Washington and Brussels. In July, visits from US Assistant Secretary of State Victoria Nuland, German Chancellor Angela Merkel, and EU High Representative Federica Mogherini encouraged Sarajevo reformers. Bosnians place particular faith in Merkel and Germany to help their economy reform, and Merkel’s affirmation of a European future for Bosnia resonated with the public.

Transatlantic politicians should capitalize on this opening, pushing publicly and persistently for deep-cutting anti-corruption efforts, the implementation of existing reform packages, and progress on the terms of the signed Stabilization and Association Agreement as a precondition for deeper European integration. In addition, Brussels and Washington must accompany their reformist rhetoric with formal technical assistance, perhaps modeled after the EU Police Mission in Bosnia.

Cooperation in pursuing anti-corruption and economic reform will deepen ties between Sarajevo and its partners, and a renewed commitment to integration will give Sarajevo greater political focus and coherency.

As for Republika Srpska, Sarajevo and its partners will need to leverage their partnership with Serbia in order to preserve regional stability while shoring up the legitimacy of the Bosnian state. While Vucic’s visit to Srebrenica ended in disaster, Bosnia’s presidency has indicated its willingness to cooperate, making efforts to meet with Vucic as quickly as possible to smooth over tensions.

Vucic holds immense influence in Republika Srpska; Dodik has acknowledged that he consults Belgrade before making any crucial decisions. Sarajevo and Belgrade thus have an opportunity to curb Dodik’s separatist tendencies. In their upcoming meeting, Vucic and the Bosnian presidency must craft a long-term approach to Dodik’s nationalism, predicated on the need to keep both Bosnia and Serbia on the path of European integration.

Vucic will not need much convincing; he earlier declared his intent to have Dodik reconsider the referendum, and Serbia’s partners underlined the importance of regional stability to Serbian accession to the EU. Working together, Serbia and Bosnia-Herzegovina will be better equipped to meet Dodik’s long-term challenge: safeguarding Sarajevo’s supremacy within its borders and maintaining peace between Bosniaks and Serbs.

By keeping Bosnia on the transatlantic agenda and pushing for necessary improvements, Washington and Brussels encourage reformers and help Sarajevo bring focus to its political scene. By presenting a united front and solution to the Republika Srpska problem, Sarajevo and Belgrade can present themselves as stabilizing forces, reinforce each other’s European orientation, and declaw Dodik’s separatist behavior. Both steps are necessary to preserve the legitimacy of Bosnia and maintain its European orientation.

Peter Sattler is an intern at the Atlantic Council.